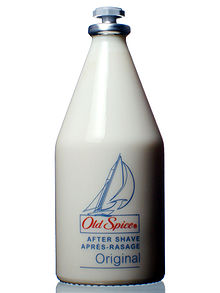 A bottle of Old Spice aftershave

Old Spice is a prominent American brand of male grooming products. It is manufactured by Procter & Gamble, which acquired the brand in 1990 from the Shulton Company. 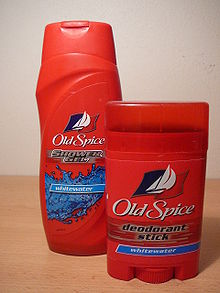 The Shulton Company, original producer of Old Spice, was founded in 1934 by William Lightfoot Schultz. The first Old Spice product was a fragrance called Early American Old Spice for women, introduced in 1937. Old Spice for men followed in 1938.

The men's products were dominated by shaving soap and aftershave lotion, marketed with a nautical theme. Sailing ships in particular were used as a trademark. The original ships used on the packaging were the Grand Turk and the Friendship. Other ships used on Old Spice packaging include the John Wesley, Salem, Birmingham, Maria Teresa, Propontis, Recovery, Sooloo, Star of the West, Constitution, Java, United States, and Hamilton. Procter & Gamble purchased Old Spice from the Shulton Company in June 1990. The clipper ship was replaced by the yacht logo in February 1992. In the late 2000s, Procter & Gamble introduced many forms of deodorant sticks, body washes, and body sprays in several scents under the Old Spice brand.

"If your grandfather hadn't worn it, you wouldn't exist."

In early 2008, the original Old Spice scent was repackaged as "Classic Scent," both in the after shave and cologne versions. The traditional white glass bottles gave way to plastic, and the grey stoppers to red. Old Spice Classic shower gel is sold using the slogan "The original. If your grandfather hadn't worn it, you wouldn't exist."

Old Spice as of 2010 has three main lines of grooming products and each line features a variety of products and scents. "High Endurance" is promoted as a basic grooming line, and includes antiperspirant, deodorant, body wash, shower gel, and hair and body wash. "Classic" is aimed at people who prefer the original scents of Old Spice including deodorant sticks, body wash, and shaving products. "Red Zone" is aimed as a higher-end line, including antiperspirant, deodorant, body wash, and body sprays. It is claimed to have a time-released scent system.