Naima Jeffery is a fictional character from the BBC soap opera EastEnders, played by Shreela Ghosh.

Asian Naima tried to embrace Western culture, but this wasn't easy since her family constantly tried to force her to adhere to their ancient customs. Sick of being forced to live in an arranged marriage with a husband she loathed, Naima made a stand and shamed her family by filing for a divorce.

Original EastEnder Naima ran a corner shop on Bridge Street with her husband Saeed Jeffery. Her parents were originally from Bangladesh, but she was born in England. Naima and her husband were on the receiving end of racial abuse and vandalism from the neo-nazi group that included Nick Cotton, which made life in Walford particularly unpleasant for them both.

Naima was sent to Walford for an arranged marriage with Saeed. The two didn't get on and Naima became unwilling to adhere to Moslem customs, regularly disobeying her husband's wishes and refusing to share his bed. Saeed started visiting prostitutes and would regularly go to the strip-club where Mary Smith worked. He later made obscene phone calls to Naima's good friend Debbie Wilkins. When Naima was tipped off by an anonymous letter from Dot Cotton, she was disgusted with Saeed and decided to go against her family's wishes and divorce him.

After Saeed left in December 1985, Naima made a determined effort to embrace Western culture and feminism. She stopped wearing saris, learned to drive, cut her hair short and moved into a flat with Debbie. With her new look, Naima started attracting a lot of male attention on the Square and even dated Walford lothario, Simon Wicks, and Dr Jaggat Singh, but neither relationship developed into anything serious.

Naima's family persisted in sending her more cousins to marry and in 1986, Rezaul Gabir arrived in England. He lived and worked with Naima, reporting her every move to her parents. Naima protested, but as her parents were funding her business, she had to put up with Rezaul. He was arrogant and pretentious, making him and Naima clash immediately. Naima realised her family were attempting to set Razaul up as her new husband and she refused to oblige (pleasing Razaul as he wasn't interested in Naima). Angered by their daughter's defiance, Naima's parents cut off all funds, leaving Naima struggling to pay her rent and forced her to move into the Fowlers' home for a while.

In 1987, Farrukh, yet another cousin, was sent over to woo Naima. Farrukh was an important politician in Bangladesh and despite Naima's initial protests, she was drawn to him. Farrukh was different to her other suitors, supporting her independence, so she agreed to marry him. They married in Birmingham and left Walford for Bangladesh in November 1987. 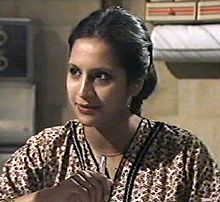 Naima Jeffery as she appeared in 1985.

Naima Jeffery was one of the original twenty-three characters invented by the creators of EastEnders, Tony Holland and Julia Smith. Naima and her husband were the first Asian characters to appear in the soap. Black and Asian characters were two ethnic minorities that had previously been under-represented in British soap before EastEnders aired. Holland and Smith knew that for the soap to succeed there needed to be a varied group of characters, so that several different sections of the audience had someone to identify with. Additionally, if the programme was to be realistic, it had to reflect the cross-section of society that actually existed in the real location. For these reasons, different sexes, ages, classes, religions and races were all included in the original character line-up. Both Holland and Smith had been at the forefront of the move towards 'integrated casting' in television and had encountered an array of ethnic diversities in the process. Even though the ethnic minority groups were deemed the hardest to research, Holland and Smith called upon their contacts to relay information about their origins and lifestyles and were then able to portray Walford's most recent immigrants more realistically. Naima was originally intended to be named Najma; named after one of Tony Holland's Bengali friends, the wife of Saeed (who was also the character name of Naima's on-screen husband). Holland had attended their arranged marriage, and he thought the notion of an arranged marriage, particularly an unhappy one, would be an interesting and informative topic to tackle in the soap. Because of the similarities with his real life friends, the name Najma was altered to Naima, in order to protect her identity.[1]

Naima's original character outline as written by Smith and Holland appeared in an abridged form in their book, EastEnders: The Inside Story (In this passage, Naima will be referred to as Najma).

"He is quarter English, three-quarters Bengali and she is wholly Bengali. Their parents were originally from Bangladesh, formerly East Pakistan, and they are Muslims and cousins...Najma had an easier childhood...She became aware that she couldn't accept the traditional role of an Indian wife, but she wasn't enough of a rebel to leave home and adopt a totally different lifestyle...Saeed's mother's father became seriously ill. It was decided that Saeed's parents should return home to India, and a hasty marriage was arranged between Najma and Saeed so the young couple could then run the food store...They are in a confusing situation, accepting the customs of their parents, yet - because of having been born, brought up and educated in this country - feeling that they're slightly English...Neither of them is particularly docile, having lived through the jungle of the school playground, and the cut and thrust of working-class urban life...Saeed and Najma will make a big effort to mix, and most of the time, fail." (page 58)[1]

Holland and Smith had a lot of trouble casting the role of Naima, as barely any Muslim women responded to their advertisement, and those who did were all unsuitable. Shreela Ghosh, a non-Muslim Indian actress of Bengali ethnicity, was a late arrival. She was a comparatively inexperienced actor, but she was the right age, looked right and she also liked what the programme was trying to do with a young Asian couple. She was subsequently cast in the role.[1]

Naima ran the corner shop, and her early storylines depicted the problems of her arranged marriage and portrayed a character caught between two cultures. Despite being labelled as a stereotypical portrayal of Asian people today, at the time in the 80s such issues had not been widely covered, particularly on mainstream television.[2]

The character lasted in the show for over two years, depicting an independent woman battling against her families wishes and striving to succeed even after her first marriage ended in divorce. The character eventually remarried and returned to her native Bangladesh in November 1987.[3]