For simple unicellular organisms[nb 1] such as the amoeba, one cell division is equivalent to reproduction-- an entire new organism is created. On a larger scale, mitotic cell division can create progeny from multicellular organisms, such as plants that grow from cuttings. Cell division also enables a sexually reproducing organisms to develop from the one-celled zygote, which itself was produced by cell division from gametes. And after growth, cell division allows for continual construction and repair of the organism.[1] A human being's body experiences about 10,000 trillion cell divisions in a lifetime.[2]

The primary concern of cell division is the maintenance of the original cell's genome. Before division can occur, the genomic information which is stored in chromosomes must be replicated, and the duplicated genome separated cleanly between cells. A great deal of cellular infrastructure is involved in keeping genomic information consistent between "generations". 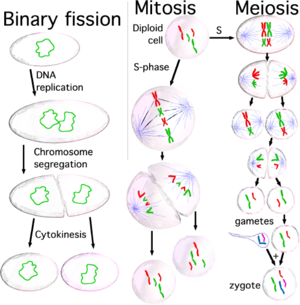 Furthermore, the pattern of cell division that transforms eukaryotic stem cells into gametes (sperm in males or ova in females) is different from that of eukaryote somatic (non-germ) cells.

Multicellular organisms replace worn-out cells through cell division. In some animals, however, cell division eventually halts. In humans this occurs on average, after 52 divisions, known as the Hayflick limit. The cell is then referred to as senescent. Cells stop dividing because the telomeres, protective bits of DNA on the end of a chromosome required for replication, shorten with each copy, eventually being consumed, as described in the article on telomere shortening. Cancer cells, on the other hand, are not thought to degrade in this way, if at all. An enzyme called telomerase, present in large quantities in cancerous cells, rebuilds the telomeres, allowing division to continue indefinitely.

They teach you cell division in the middle school.