"Walking in Memphis" is the of American , from his self-titled 1991 album "Marc Cohn". The song became Cohn's biggest hit, peaking at #13 on the and, after being re-released in fall 1991, reached #22 on the UK chart. The popularity of this song helped Cohn win the Grammy for Best New Artist in 1991.

The story behind this song: the singer, Cohn, was a young aspiring singer-songwriter from . He'd never been to Memphis before; in fact he'd never traveled at all. Upon reaching the South he was very moved emotionally after seeing an sermon, and underwent both spiritual transformation and professional growth. Al Green is referenced in the lyrics as "Reverend Green." It was there in Memphis he met his first wife Cindy, about whom he wrote the acoustic cult classic "Cindy Sue, I Love You". The evocative song contains references to and .

The song opens with an allusion to Elvis referencing the protagonist putting on his "blue suede shoes." The reference to "Blue Suede Shoes" is not actually about Elvis Presley, but about , who recorded the song in Memphis for Sam Phillips at Sun Records. Perkins' ill-luck in a car wreck stopped him from touring to promote the record, allowing Elvis' cover version to become a massive hit. Presley's copy was recorded at RCA studios in Nashville. The narrator tells of seeing "The ghost of Elvis up on Union Avenue and followed him up to gates of Graceland." Sam Phillips' studios were called "Memphis Recording Service" and were at 706 Union Avenue. Elvis' start on the journey to fame and fortune (i.e. Graceland) is usually attributed to the success of "Blues Suede Shoes" - and that of "Heartbreak Hotel." "Now, security did not see him" is probably a comment on the story that Bruce Springsteen once successfully scaled the wall at Graceland, trying to deliver a song he wrote. Apparently, Elvis wasn't there. "There's catfish on table and gospel in the air" marks the dichotomy between secular and sacred. Catfish is the standard Blues metaphor for sexual intercourse. (The word is also interchangeable with the slang expression for the female sex zones). "Catfish" thus would appeal to the bodily instincts, whereas "gospel" would be to the intellect. The metaphor gains more credence since Al Green supposedly renounced secular music after being scalded with grits by a jealous girlfriend. The lyrics refer to the girl waiting in the Jungle Room. This was the name of the play area at Elvis' Graceland mansion where he and the crew would take care of business (TCB).

After touching down in the "land of the Delta Blues," he asks W. C. Handy to "please look down over me." Although he has a first class ticket, he's as "blue as a boy can be."

From this opening verse, the narrator seems to be following in the footsteps of Elvis Presley, and his plea to W. C. Handy would appear to reflect his desire to work in music. After the second chorus, the narrator talks about Memphis, ending with the line "but, boy, you've got a prayer in Memphis," reflecting his hopes, and the probable reason he made the journey. In the chorus, he describes himself as "walking with my feet ten feet off of Beale," a reference to the famous street in Memphis and to the fact that in times of happiness, one can be described as walking ten feet off the ground.

The second verse describes a visit to Elvis' home, , where the narrator sees the ghost of Elvis and follows him up to the gates. He also describes a "pretty little thing, waiting for the King, down in the jungle room," which could be a reference to Lisa Marie in the famous Graceland jungle room (It is believed that Lisa Marie would sit waiting for Elvis to return in the Jungle room - her teddy bear can still be seen located on her chair in the room).

The final verse describes the narrator being asked to "do a little number" for Muriel who plays the piano at the Hollywood, a cafe in what is now . The line, "Muriel plays piano every Friday at The Hollywood" is a reference to a local artist who played at the Hollywood Cafe, which is a small diner/music joint in Tunica County, Mississippi. Muriel has passed away, but The Hollywood is still there - you drive right past it to go to several of the casinos now located in Tunica. In arguably the song's most memorable line, when she asks Cohn, who was born Jewish, whether he's a Christian, he replies, "Ma'am, I am tonight." 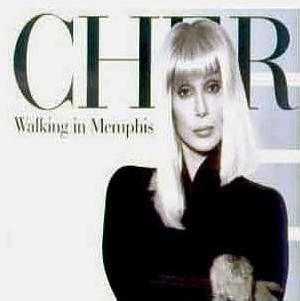 released the song as the first UK single release from her thirtieth album "." The song peaked at #11 on the British charts. Cher also performed it on her and some legs of her three-year .

This version is noteworthy in that it is reversed in regard to gender, replacing Muriel with Gabriel and "ma'am, I am tonight" with "man, I am tonight."

The Cher version of the song was a notable part of the conclusion of "" episode "."

* American band also released a of the song. The song, which reached #8 on the chart and #61 on the in 2003, can be found on their album "."
* British duo Shut Up and Dance sampled the melody and added amended lyrics as the basis for their #2 UK Singles Chart single "Raving, I'm Raving." But due to not having properly cleared the sample, the single was released only as a limited edition. To further avoid more complications, all proceeds from the single were ordered to be given to charity. Fact|date=September 2007 Shut Up and Dance were later commissioned to produce remixes for the Cher version, enabling them to use parts of the deleted "Raving I'm Raving."
* "" (the second season of the Belgian version of the worldwide "Idol" series) runner-up Wouter de Clerck released his version of the song in 2005.
* In 2007, the song was covered by German group Master Blaster, with vocals by Rachel Hiew.
* The song "I'm Raving" by German group Scooter used the melody and similar lyrics to the Shut Up and Dance version but with certain words slightly changed such as 'energy pouring down on me' instead of 'ecstacy pouring down on me' (the original lyric being 'won't you look down over me?)'
* The song was sampled by Oddz N Endz for rapper Yo Gotti off his 2008 album King of Memphis.
* Second runner-up from sung Walking in Memphis for his first audition piece.
* Tom Jones also performed the song as an encore during his 1990's world tour. It can be found on the live album/tour edition CD of the same era.
*Eli Mattson performed this song while playing piano on an audition episode of the reality show .
* Jourdain performed this song while playing the guitar in the Grand Final of , 2008.