Mirzapur Cadet College (Bengali: মির্জাপুর ক্যাডেট কলেজ) is the third oldest and one of the very best cadet colleges of Bangladesh. Like other cadet colleges it follows the national curriculum prescribed by the National Curriculum and Textbook Board (NCTB) and gives special emphasis on extracurricular and co-curricular activities.

Mirzapur Cadet College is situated very near to the point of intersection of the 90o9' east longitudinal line and the 24o5.3' north latitudinal line. The river Bongshi runs through the east side of the college and on the south and south-west side the river Barinda flows. The river Footjani joins with Barinda at the west side. It is on the edge of Tangail district. The college is 8 km south of Mirzapur Upazilla proper.It is 37 km south-east from Tangail district & 48 km north-west from capital city Dhaka.

After the establishment of Faujderhat Cadet College in Chittagong district and Jhenaidah Cadet College in the Khulna division the foundation of Momenshahi Cadet College (former name of Mirzapur Cadet College) was being planned. The objective of this plan was to prepare army officers for the Pakistan Army.

The then president of Pakistan Field Marshal Ayub Khan took initiatives to establish the cadet college. He laid the foundation stone of Momenshahi Cadet College at the Mirzapur Upazila in the then Mymensingh District ( now Tangail district) of Bangladesh on 29 November 1963. The foundation stone is still there on the wall of the main academic building of the college.

Academic activities started from that year with three intakes, that is, intakes in Classes 7, 8 and 9.

After the 7th March Speech a violent procession by an angry mob entered into the College campus on 8th morning. Inter Cadet College Cricket Competition was going on at that time. Principal Wng Comd Sulaiman Haider Kayani closed the college then and then; and sent all the cadets home. Since then, the college remained closed. During the liberation war the college was opened in the first week of November 1971. Mr Wahab was acting principal at that time. College campus was kept under guard by Rajakars. In each House the ground floors were kept vacant and Rajakars were staying there. The cadets were send to the first floors. Presence of cadets were about 50%. Every night the sounds of firing as well as explosions were heard. Probably there was a raid by Freedom Fighters (Kaderia Bahini) occurred in one night. The College was closed on the next day , probably on 20th Nov. Following that incident, by next week a number of bridges were destroyed and the Tangail Road was cut off. The College never opened before the Independence. During the War Military camps were established by Pakistan Forces. 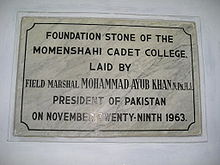 The college started to climb to its height after the Independence. Though some tensions rose when a government plan was unveiled to terminate the cadet college system, but as a result of joint efforts by both the cadets, the teachers, the parents - and even by ordinary people, the decision was put to an hold.

Today, Mirzapur Cadet College is regarded as one of the best educational schools in the country. Each year at least 900 7th graders compete to earn the 50 seats available in this College. And, to continue the efforts of these three grandfather Cadet Colleges (Faujderhat, Mirzapur and Jhenidah Cadet College), other cadet colleges were established. Today there are 12 cadet colleges, including 3 for only girls.

As follows, more about MCC is given.

Cadets are enrolled in the seventh grade. They continue their study for six years. The Higher Secondary Certificate (HSC) is the final examination to pass.

Each class generally has fifty students. The Secondary School Certificate (SSC) and the Higher Secondary Certificate (HSC) examinations are administered under direct control of the Board of Education of Dhaka Division.

In accordance with the National Education Policy, Mirzapur offers only the Science and Humanities educational sections for the cadets from the 9th grade. However, the cadets are encouraged to study Science, but Humanities students are not necessarily overlooked. Cadets have proved their excellence in every sectors of education since its inception. 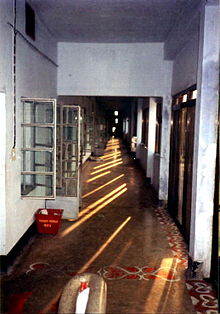 The museum is situated just beside the Arts and crafts & Geography department. Some items are:

All cadets take their meals together in the dining hall. There are separate seating facilities for the prefects and the duty master generally known as the " High Table". Five meals are served everyday. The first Butler of the Dining Hall was 'Mr. Hitler'.

When the academic activities of the college started on 9 January 1965, there were only two houses - Jinnah (now Fazlul Huq House) and Liaqat (now Suhrawardy House) for students' accommodation. Later Ayub House (now Nazrul House) was constructed to accommodate more students.

There is a central mosque where all the Cadets are bound to say their evening prayers everyday. The cadets also says their Jumma prayer there. 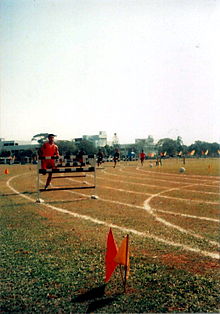 Mirzapur Cadet College has a hospital for the cadets and for employees. A full time doctor from the Army Medical Corps is appointed along with several qualified assistants. All the medicines are provided free of cost. Sick cadets can report at the hospital every morning. The hospital is open 24 hours to accommodate any special needs.

The fantastic MCC Campus was designed by the famous architect Mr. Thariani. 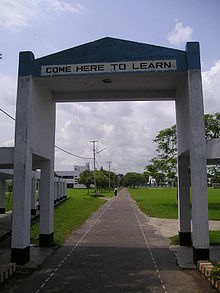 Entrance to the house area 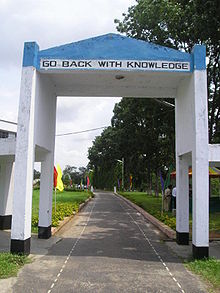 Gate of the house area 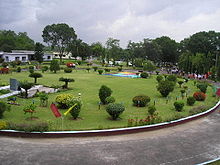 Mirzapur Cadet College has a library named as Shahid Khurshid Smriti Granthagar.The library is named after the martyr of the Liberation War of Bangladesh who was a cadet of this college, there is a portrait of Khurshid Ali on the wall of the library.

The library consists of around 18000 books. Daily newspapers and weekly magazines are available for cadets and staff.

These clubs make the cadets to move out from the traditional textbooks, that what makes them different and smarter, and well-prepared for the life ahead.