Denmark in the Eurovision Song Contest

Denmark in the Eurovision Song Contest

Denmark has competed in the Eurovision Song Contest from 1957 to 1966 and from 1978 to the present day and has a good record, finishing in the top three six times and winning twice. From 1967 until 1977, Denmark didn't participate in the contest.

The most recent Danish victory came in 2000, with the Olsen Brothers defying the odds (they were considerably older than their competitors and only one male duo had won before) to win with "Fly on the Wings of Love". The Olsens' win however, is Denmark's highest scoring ever, with 195 points. Its lowest score ever, was in 1962 with only 2 points. Denmark's average score is 65.261 points.

Since that time, the Danes have competed with distinction and recently recorded a third-place finish in the 2005 semi-final with Jakob Sveistrup's "Talking to You". In that same year, Copenhagen hosted Congratulations, the 50th Anniversary special of the Contest.

The Danish qualifying preliminary contest for the Eurovision Song Contest is the Dansk Melodi Grand Prix.

Denmark first participated at the Eurovision Song Contest 1957, held in Frankfurt, Germany. Denmark had wanted to compete at the first contest in 1956, but had submitted their application past the deadline, and did not compete. Denmark was the first Nordic country to participate at the contest, with Sweden, Norway and Finland following soon after.

Denmark's first participants were Birthe Wilke and Gustav Winckler, with the song "Skibet skal sejle i nat" (English: The Ship Is Leaving Tonight). Their performance was controversial as, at the end of the song, the couple performed an 11-second kiss, that caused outcry in some countries. Nevertheless, the performance achieved a respectable 3rd place.

However controversy arose again for Denmark. After Norway announced the votes, Katie Boyle, the host, said that she could not hear them and would go back to them later. However everyone else did hear them, and when Boyle went back to Norway again the votes had been changed, thus changing the outcome of the contest and giving the victory to Denmark at Switzerland's expense. In fact, the reason why Norway had to announce their votes again was that the Norwegian spokesperson didn't use the right procedure the first time and therefore there was doubt whether he gave the correct votes on the first occasion.

However, the votes still stood and the victory went to Denmark. The contest was therefore held in Denmark for the first time, in 1964 after their victory.

After the 1966 contest and a record low of 14th place, Denmark withdrew from the contest indefinitely. DR did not view the contest as being quality entertainment. Dansk MGP was not held from that year onwards as well.

However, in the 1978 contest, after 12 years, Denmark returned to the contest sending Mabel with the song "Boom Boom". Dansk MGP returned as well, and Denmark continues to participate to this day.

Denmark's most successful time at the contest was between 1984 and 1990. During this time Denmark achieved 4 top-five places, with 2 of them being 3rd. The duo of Kirsten Siggard and Søren Bundgaard represented Denmark three times during this period, under the name "Hot Eyes". In 1984 they sang the song "Det' lige det" (That's Just It) and came in at 4th place. In 1985 they won Dansk MGP for a second time, becoming the only act to win twice in a row. They sang "Sku' du spørg' fra no'en?" (What Business Is It Of Yours?), but could not repreat their success of the previous year, and came 11th.

Hot Eyes again won Dansk MGP in 1988 with "Ka' du se hva' jeg sa'?" (Don't You See That's What I Told You?), and competed for Denmark at the Eurovision Song Contest 1988 in Dublin, Ireland. At Dublin they managed to beat their previous placing and came in at 3rd place, losing only to Celine Dion and Scott Fitzgerald (singer).

After 1989 Denmark fell from their high positions of the 80's, and was relegated from the contest on three occasions in the 90's. In 1993 Tommy Seebach, who had previously represented Denmark in 1979 and 1981, could only manage a 22nd placing, with Denmark being relegated from the contest in 1994. Aud Wilken sang for Denmark at the 1995 contest with "Fra Mols til Skagen" (From Mols to Skagen) and came 5th, but this high placing could not be repeated in 1996, as Denmark couldn't even come out of the pre-selection process of the contest.

With another bad placing in 1997, Denmark was forced again to skip the 1998 contest. The abolition of the language rule, where a country could only sing in their official languages, in 1999 brought a return to success for Denmark, when Michael Teschl and Trine Jepsen came 8th with "This Time I Mean It".

Denmark won the contest again in 2000, when brothers Jørgen and Niels Olsen came from nowhere and stole the title for Denmark, with "Fly on the Wings of Love". The song went on to enjoy huge success around Europe.

At the 2001 contest, held in Copenhagen, Rollo & King came second with the song "Never Ever Let You Go". However Denmark fell from above again in 2002 when, despite being a favourite to win the contest, Malene Mortensen came last for Denmark with "Tell Me Who You Are". This was the first time that Denmark came last. Denmark were again relegated from the 2003 contest.

Since the introduction of semifinals in 2004 Denmark has qualified for the final 6 out of 8 times. In 2010 they came 4th with "In a moment like this" performed by Chanée and N'evergreen and in 2011 5th with "New tomorrow" performed by the band A Friend In London. 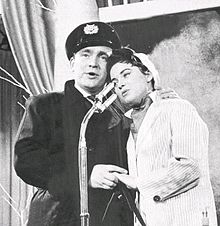 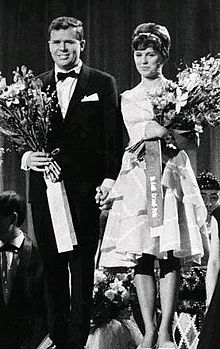 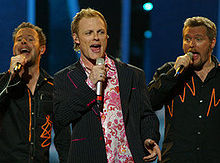 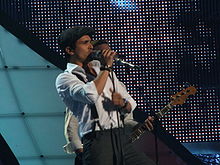 Denmark has given the most points to...

Denmark has received the most points from...

Since introducing the semi-finals in 2004

Denmark has given the most points to...

Denmark has received the most points from...

NOTE: The tables with points from 2004 include points awarded in both finals and semi-finals where the highest point from the final/semi-final is picked.