Asian Dust (also yellow dust, yellow sand, yellow wind or China dust storms) is a seasonal meteorological phenomenon which affects much of East Asia sporadically during the springtime months. The dust originates in the deserts of Mongolia, northern China and Kazakhstan where high-speed surface winds and intense dust storms kick up dense clouds of fine, dry soil particles. These clouds are then carried eastward by prevailing winds and pass over China, North and South Korea, and Japan, as well as parts of the Russian Far East. Sometimes, the airborne particulates are carried much further, in significant concentrations which affect air quality as far east as the United States.

In the last decade or so, it has become a serious problem due to the increase of industrial pollutants contained in the dust and intensified desertification in China causing longer and more frequent occurrences, as well as in the last few decades when the Aral Sea of Kazakhstan and Uzbekistan started drying up due to the diversion of the Amu River and Syr River following a Soviet agricultural program to irrigate Central Asian deserts, mainly for cotton plantations. 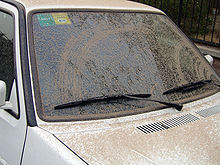 Dust deposition in Beijing during the 2006 season.

Areas affected by the dust experience decreased visibility and the dust is known to cause a variety of health problems, not limited to sore throat and asthma in otherwise healthy people. Often, people are advised to avoid or minimize outdoor activities, depending on severity of storms. For those already with asthma or respiratory infections, it can be fatal. The dust has been shown to increase the daily mortality rate in one affected region by 1.7%.

Although sand itself is not necessarily harmful to soil, due to sulphur emissions and the resulting acid rain, the storms also destroy farmland by degrading the soil, and deposits of ash and soot and heavy metals as well as potentially dangerous biomatter blanket the ground with contaminants including croplands, aquifers, etc. The dust storms also affect wildlife particularly hard, destroying crops, habitat, and toxic metals interfering with reproduction. Coral are hit particularly hard. Toxic metals propagate up the food chain, e.g. from fish to higher mammals. Air visibility is reduced, including canceled flights, ground travel, outdoor activities, and can be correlated to significant loss of economic activity. Japan has reported washed clothes stained yellow. 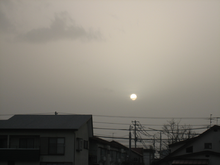 Shanghai on April 3, 2007 recorded an air quality index of 500.[3] In the US, a 300 is considered "Hazardous" and anything over 200 is "Unhealthy". Desertification has intensified in China, as 1,740,000 km² of land are "dry", it disrupts the lives of 400 million people and causes direct economic losses of 54 billion yuan ($7 billion) a year, SFA figures show.[4] These figures probably vastly underestimate, as they just take into account direct effects, without including medical, pollution, and other secondary effects, as well as effects to neighboring nations.

El Niño plays a role in Asian dust storms, because ice sheets that form in winter can keep dust from sweeping off the land.[citation needed]

In recent years, South Korea and the People's Republic of China have participated in reforestation efforts in the source region. However, this has not affected the problem in any significant way. In April 2006, South Korean meteorologists reported the worst yellow dust storm in four years.[5]

China also has taken steps, with international support, to plant trees in desert areas, including a claim of 12 billion trees planted. However, the winds are so strong in some places that the trees simply topple or are buried in sand.

In 2007, South Korea sent several thousand trees to help block the migration of the yellow dust. These trees, however, were planted only by highways, because the People's Republic of China stated to South Korea that they could receive the trees but that they would decide where the trees would be planted.

An analysis of Asian Dust clouds conducted in China in 2001 showed them to contain high concentrations of silicon (24-32%), aluminum (5.9-7.4%), calcium (6.2-12%), and iron, numerous toxic substances were also present, as it is thought that heavier materials (such as poisonous mercury and cadmium from coal burning) settle out of the clouds closer to the origin.

However, Sarah O'Hara of the University of Nottingham in England, writing for the Lancet says that this doesn't mean that the effects are worse closer to the source. People further from the source of the dust are more often exposed to nearly invisible, fine dust particles that they can unknowingly inhale deep into their lungs, as coarse dust is too big to be deeply inhaled.[1] After inhalation, it can cause long term scarring of lung tissue as well as induce cancer and lung disease.

An American study analyzing the composition of dust events over Colorado also points to the presence of carbon monoxide, possibly incorporated in the clouds as they passed over industrialized regions of Asia.

Some of the earliest written records of dust storm activity are recorded in the ancient Chinese literature.[6] It is believed that the earliest Chinese dust storm record was found in the Zhu Shu Ji Nian (Chinese: 竹书纪年; English: the Bamboo Annals).[7] The record said: in the fifth year of Di Xin (1150 BC, Di xin was the Era Name of the King Di Xin of Shang Dynasty, it rained dust at Bo (Bo is a place in Henan Province in China; in Classical Chinese: 帝辛五年，雨土于亳).

The first known record of an Asian Dust event in Korea was in 174 AD during the Silla Dynasty.[8] The dust was known as "Uto (우토, 雨土)", meaning 'Raining Sands', and was believed at the time to be the result of an angry god sending down dust instead of rain or snow.