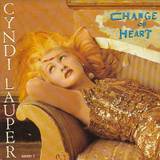 "Change Of Heart" is the second single released by from her second album, "True Colors" in 1986.

The single reached #7 on MTV US on 1987. The song has become a fan favorite and Lauper still often performs it.

Popular remixes by were also released. A popular music video was filmed in in . It features Lauper and her band performing the song in front of a large group of people.

Lauper re-recorded it acoustically, and her official site later made it available for free as a .

The sang background vocals on the original recording.