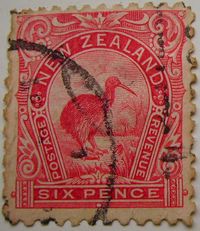 A Kiwi on a 1898 New Zealand stamp. The bird, which is a national icon of New Zealand takes its name from the Māori language

During the 19th century, New Zealand English gained many loanwords from the Māori language, mainly the names of birds, plants, fishes and places, but the flow stopped abruptly around the beginning of the 20th century.[1] From the last quarter of the 20th century the flow resumed, this time of cultural concepts.

Large numbers of native plants and animals retain their Māori names in New Zealand English. These include birds: kākāpō, kea, kererū, kiwi, kōkako, moa, pūkeko, takahē, tūī and weka; plants: kahikatea, kānuka, kauri, kūmara, mānuka, mataī, matakoura[2], toetoe, tōtara and tutu; and fish: tarakihi and hapuku among many others. The use of Māori words is increasing, particularly in the North Island.

"Kia ora" (literally "be healthy") is a Māori term of greeting, meaning "hello" or "welcome". It can also mean "thank you", or signify agreement with a speaker at a meeting. The Māori greetings "tēnā koe" (to one person), "tēnā kōrua" (to two people) or "tēnā koutou" (to three or more people) are also widely used, as are farewells such as "haere rā".

The Māori phrase "kia kaha", "be strong", is frequently encountered as an indication of moral support for someone starting a stressful undertaking or otherwise in a difficult situation. Although previously in common usage it became an iconic phrase of support following the 2010 Canterbury earthquake.

Some hybrid words, part English and part Māori, have developed, the most common of which is probably half-pai — often written half-pie — meaning incomplete or substandard quality, pai being the Māori word for "good". (The portmanteau form half-pied is also used, derived from half-baked.) Similarly, the Māori word ending -tanga, which has a similar meaning to the English ending -ness, is occasionally used in hybrid terms such as kiwitanga (that is, the state of being a New Zealander).

Several Māori words are used in English as lighthearted, or even slang, equivalents of their more common English counterparts. The term puku for stomach, for example, is more likely to be encountered during a friendly chat than in more formal circumstances, with one of its uses being a euphemism for a large belly. 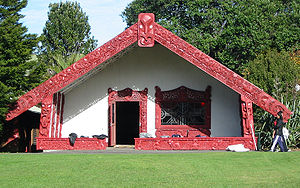 A meeting house on a marae.

Many Māori words or phrases that describe Māori culture have become part of New Zealand English and may be used in general (non-Māori) contexts. Some of these are:

Other Māori words and phrases may be recognised by most New Zealanders, but generally not used in everyday speech: