The Hungarian Socialist Party (Hungarian: Magyar Szocialista Párt, MSZP) describes itself as a social democratic party in Hungary. It is the partial successor of the communist Hungarian Socialist Workers' Party (or MSZMP), which ruled Hungary between 1956 and 1989. The decision to declare the party a successor of the MSZMP was controversial, and still carries repercussions for both the MSZP and Hungary. Another source of controversy is that some members of the former communist elite maintained political influence in the MSZP, a factor which is still true today. Indeed, many key MSZP politicians were active members or held leadership positions within the MSZMP. The party is not to be confused with the Workers' Party, a marginal party of hardline communists and another successor to the MSZMP.

On economic issues, the Socialists have often been greater advocates of liberal, free market policies than the conservative opposition, which has tended to favor more state interventionism in the economy through economic and price regulations, as well as through state ownership of key economic enterprises. The MSZP, in contrast, implemented a strong package of market reforms, austerity and privatization in 1995-96, when Hungary faced an economic and financial crisis. Besides a more liberal approach to the economy overall, the MSZP also differentiates itself from the conservative opposition through its more recent focus on transforming state social policy from a collection of measures that benefit the entire population, such as subsidies available to all citizens, to one based on financial and social need.

In political terms, the MSZP differentiates itself from its conservative opponents mainly in its rejection of nationalism. The party, along with its minority liberal partner in the governing coalition, campaigned against extending Hungarian citizenship to ethnic Hungarians living in neighboring countries in a December 5, 2004 referendum. The referendum failed due to insufficient voter turnout, but tensions remain over the fate of Hungarian minorities abroad, which in some countries have faced hostility or even a degree of persecution at the hands of majority cultures, particularly when nationalist or populist governments have been in power in those countries.[citation needed]

The party is a member of the Socialist International and the Party of European Socialists, and it holds a chairmanship and several vice-chairmanships in committees at the European Parliament). Internally, party members hold a variety of opinions, containing rival groups, e.g. factions both for and against the prime minister, Ferenc Gyurcsány.

Besides Gyurcsány, the MSZP's most internationally recognized politicians are Gyula Horn and László Kovács, currently member of the European Commission responsible for taxation.

MSZP formed the first minority government of Hungary, following the SZDSZ's backing out of the coalition with a deadline of May 1, 2008.

MSZP lost the 2010 elections (won by Fidesz with a 2/3 majority), gaining only 19,3% of the votes, and 58 seats in the parliament. Currently, they are the biggest opposition party in Hungary.

Katalin Szili, a former Speaker of the National Assembly of Hungary formed the Movement of Alliance for the Future in 2010 and had own candidates in some areas in the 2010 Hungarian parliamentary election. Szili was elected to the Parliament of Hungary via the Baranya County Party list where she was chairperson of the local MSZP chapter. After the 2010 local elections, held on the 3rd of October, she founded the Social Union and became its first chairperson. As a result, she quit the Hungarian Socialist Party and their parliamentarian group. Continuing the parliamentarian work as formally independent MP.[2]

On 22 October 2011 Ferenc Gyurcsány has announced he is leaving the Socialist Party and will set up a new parliamentary group after succeeding in persuading the necessary number of lawmakers to join him. The new Democratic Coalition party is to be a “Western, civic centre-left” formation with ten lawmakers, Gyurcsány announced on the first anniversary that its forerunner, the Democratic Coalition Platform, was set up.[3]

The image shows Single Member Constituencies (or SMCs) voting for MSZP in 1998, 2002, 2006 in dark red, while showing SMCs voting for MSZP in 2002 and 2006 in red. The dark red districts are considered the strongest positions of the party.

Most if not all districts shown in dark red and red also voted for MSZP in 1994, a landslide victory for the party. So actually, dark red districts have an even longer uninterrupted voting history of supporting MSZP. 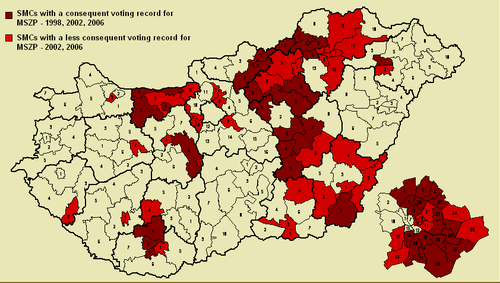