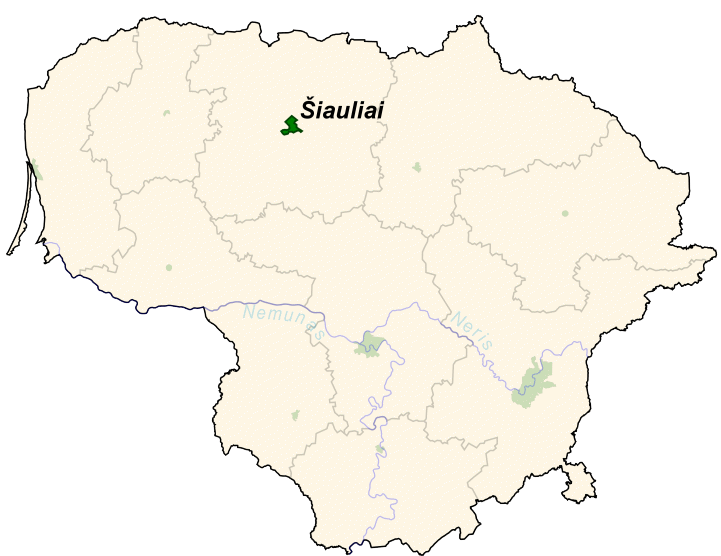 Šiauliai (pronunciation|Siauliai.ogg, IPAEng|ʃoʊˈleı, Samogitian: "Šiaulē", Latvian: "Saule" (historic) and "Šauļi" (modern), German: "Schaulen", _pl. Szawle, Russian: Шавли (historic) and Шяуля́й (modern)) is the fourth largest in , with a population of 129,075. It is the capital of . Unofficially, the city is the capital of Northern Lithuania. It is served by .

The city was first mentioned in written sources as "Soule" in chronicles describing the . Thus the city's founding date is now considered to be , , the same date when the battle took place, not far from Šiauliai. At first developed as a defense post against the raids by the Teutonic and s. After the in 1410, the raids stopped and Šiauliai started to develop as an agricultural settlement. In 1445, a wooden church was built. It was replaced in 1634 with the brick church which can be seen in the city center today.

Šiauliai was granted Magdeburg city rights in 1589. In the 16th century it became an administrative center of the area. However, in the 17th and 18th centuries the city was devastated by The Deluge and epidemics of the .

The credit for the city's rebirth goes to (1733–1785) who after a violent revolt of peasants of the Crown properties in the Northern Lithuania (so-called in Polish: Powstanie Szawelskie, 1769), started the radical economic and urban reforms. He decided to rebuilt the city according to the ideas: at first houses were built randomly in a radial shape, but Tyzenhaus decided to build the city in an orderly rectangular. Šiauliai grew to become a well-developed city, with several prominent brick buildings. In 1791 , king of the , confirmed once again that Šiauliai's city rights and granted it the coat of arm. It depicted a bear, the symbol of , the , and a red bull, the symbol of Poniatowski family. The modern coat of arms was modeled after this version.

After the , Šiauliai got a new coat of arms. The city grew and became an important educational and cultural center. Also, infrastructure was rapidly developing: in 1836–1858 a road connecting and was built, in 1871 a railroad connecting with was built. Šiauliai, being in a crossroad of important merchant routes, started to develop as an industrial town. Already in 1897 it was the third largest city in Lithuania with population of about 16,000. The demographics changed also: 56.4% of the inhabitants were in 1909. Šiauliai was known for its leather industry. Chaim Frenkel owned the biggest leather factory in the .

During , about 65% of the buildings were burned down and the city center was destroyed. After the war and re-establishment of Lithuania, the importance of Šiauliai grew. Before was attached to Lithuania, the city was second after Kaunas by population size. By 1929 the city center was rebuilt. Modern utilities were also included: streets were lighted, it had public transportation, telephone and telegraph lines, and .

The first independence years were difficult because industrial city lost its markets in Russia. It needed to find new clients in the Western Europe. In 1932 a railroad to Klaipėda was built and it connected the city to the western markets. In 1938 the city produced about 85% of Lithuania's leather, 60% of footwear, 75% of fiber, 35% of candies. Culture also flourished as many new periodicals were printed, new schools and universities opened, a library, theater, museum, and were opened.

In 1939, one quarter of the city's population was Jewish ( [http://www.shtetlinks.jewishgen.org/shavli/shavli2.html#Prologue source] ). German Nazis entered Šiauliai on , . According to one of the Jewish survivors of Siauliai, , some 1000 people were shot in nearby woods during the first weeks of occupation after having been forced to dig their own graves. There were two areas in Siauliai, one in the Kaukas suburb, and one in Traku (see ). During , the Jewish population was reduced from 8,000 to 500. About 80% of the buildings were destroyed.

The council is the member of the .

Perhaps one of Šiauliai's biggest tourist attractions is its famous .

's Palace, located at Ausros Alley 50, was constructed in the 17th century. The exterior has remained unchanged since 1875. Today the palace houses the Faculty of Arts of .

* , movie and stage actor, born here
* , a classic Russian and French movie art director, born here
* , , born here
* , Polish classic photographer, born here in 1882 (†1942?)
* , opera singer, born here
* ( Eliashiv zt"l (Leshem), a native of this city
* , self proclaimed Vilnius Ghetto police commander under the Nezi occupation (1941-1943), born here (1903)
* , Shoah survivor and Shoah awareness advocate in the United States.* Chmouel (Samuel) Kessel, father of , French writer, was born here
* , professional basketball player
* , scientist, professor at the Technical University of , born in Illovieciai near Šiauliai
* , magnate, noble, a duke and a politician. He held the post of (city foreman) of this city.
* , colonel in the Russian army who during the insurrection against Russia in 1863, went to fight on the Polish-Lithuanian side, born here
* , art historian, born here
* , born near Šiauliai was a coach for a hometown basketball team for many seasons.
* , father of the legendary Russian envoy to Afghanistan Jan Prosper Witkiewicz, has been the Vice-Marshall of Šiauliai in Kingdom of Poland
* , professional basketball player
* , born here