Meritaten also spelled Merytaten or Meryetaten (14th century BC) was an ancient Egyptian queen of the eighteenth dynasty, who held the position of Great Royal Wife to Pharaoh Smenkhkare, who may have been a brother or son of Akhenaten. Her name means "She who is beloved of Aten"; Aten being the sun-god her father worshipped; Meritaten also may have served as pharaoh in her own right under the name, Ankhkheperure Neferneferuaten.[1]

Akhenaten, Nefertiti and their children 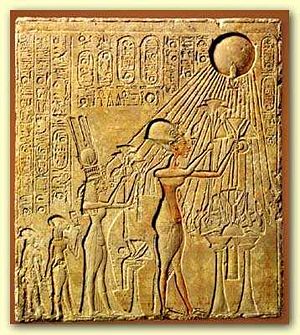 Pharaoh Akhenaten (center) and his family adoring the Aten solar disk. The next figure leftmost is Meritaten, the daughter of Akhenaten, adorned in a double- feather crown.

Meritaten was the first of six daughters born to Pharaoh Akhenaten and his Great Royal Wife, Nefertiti. Her sisters are Meketaten, Ankhesenpaaten, Neferneferuaten Tasherit, Neferneferure and Setepenre.[2] She is known to have later married Pharaoh Smenkhare. There are no known children, but the young girls named Meritaten-tasherit and Ankhesenpaaten-tasherit are sometimes conjectured to be the daughters of Meritaten and Smenkhare.[1]

She was born early in her father's reign, before the royal family moved to the new capital established by her father, Akhetaten. She was shown beside her mother in reliefs carved into the Hut-Benben, a temple devoted exclusively to Nefertiti. She also appears—along with her parents and younger sister Meketaten;on the boundary stelae designating the boundaries of the new capital.[1]

During Akhenaten's reign she was the most frequently depicted and mentioned of the six daughters. Her figure appears on paintings in temples, tombs, and private chapels. She is shown not only on the pictures showing the family life of the pharaoh, which were typical of the Amarna Period, but on official ceremonies too. She also is mentioned in diplomatic letters, by the name Mayati.[1]

Meritaten's titles include Great Royal Wife, which can indicate either marriage to her father or to Akhenaten's co-ruler Smenkhkare, whom some believe was her (half-)uncle or half-brother, although a simpler explanation for the title may be that Meritaten simply assumed her mother's duties and office of "Great Royal Wife".

Meritaten's name seems to replace that of another royal lady in several places, among them in the Northern Palace and in the Maru-Aten. This had been misinterpreted as evidence of Nefertiti's disgrace and banishment from the royal court, but more recently the erased inscriptions turned out to be the name of Kiya, one of Akhenaten's secondary wives, disproving that interpretation.[1]

According to some scholars such as J.P. Allen, Ankhkheperure Smenkhkare ruled together with Meritaten, but in the year following Akhenaten's death Smenkhkare himself died. These Egyptologists suggest that Meritaten was the 'king's daughter' Akenkeres who is recorded in Manetho's Epitome to have assumed the throne for herself as the female king Neferneferuaten. Neferneferuaten is assigned a reign of 2 years and 1 month and is placed in Manetho's account as the immediate predecessor of Rathothis, who is believed to be Tutankhamun.