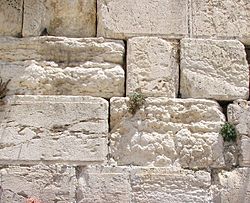 Jerusalem stone (Hebrew: אבן ירושלמית‎, even yerushalmit) is a name applied to various types of pale limestone, dolomite and dolomitic limestone, common in and around Jerusalem that have been used in building since ancient times. One of these limestones, meleke, has been used in many of the region's most celebrated structures, including the Western Wall.

Jerusalem stone continues to be used in construction and incorporated in Jewish ceremonial art such as menorahs and seder plates. In 2000, there were 650 stone-cutting enterprises run by Palestinians in the West Bank, producing a rich range of pink, sand, golden, and off-white bricks and tiles.[1] 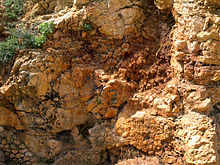 The stone in its natural state.

The highlands of Judea and Samaria are primarily underlain by sedimentary limestone, dolomite and dolomitic limestone. The stone quarried for building purposes, ranging in color from white to pink, yellow and tawny, is known collectively as Jerusalem stone.

The remains of ancient quarries can be seen near Yemin Moshe, in the Sanhedria neighborhood, and elsewhere.[2] 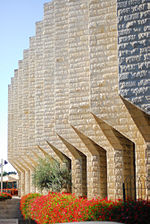 Municipal laws in Jerusalem require that all buildings be faced with local Jerusalem stone.[4] The ordinance dates back to the British Mandate and the governorship of Sir Ronald Storrs[5] and was part of a master plan for the city drawn up in 1918 by Sir William McLean, then city engineer of Alexandria.[6]

According to a report by the Geological Survey of Israel:

The various rock types in the area were exploited for different purposes.The variety of lithologic types used in building are:
1. White, coarse crystalline limestone originally referred to as "Meleke", the stone of Kings.
2. Cream-colored micritic limestone known locally as "Mizzi Hilu" (sweet rock).
3. Red-colored limestone known as "Mizzi Ahmar" (red rock).
4. Gray crystalline dolomite known as “Mizzi Yehudi” (Jewish rock – modern times).
5. Flagstone of thin-layered limestone.
These rock types were quarried from the Judean limestone and dolomite in and around the Old City of Jerusalem.[7] This variety of stone gives Jerusalem its unique character. The setting sun reflected on the cream-colored limestone facade of both ancient and modern structures gives them a golden hue, giving rise to the term "Jerusalem of Gold".[8]

The various "Jerusalem stones" are employed worldwide in Jewish buildings as a symbol of Jewish identity.[9][10] It has been used this way in many Jewish community centers, including the one in San Jose, Costa Rica,[11] in Hillel buildings such as the Columbia/Barnard Hillel building, in Jewish memorials including the Holocaust Memorial on Miami Beach, in many Jewish schools including the Charles E. Smith Jewish Day School in Rockville, Maryland and in numerous synagogues, including the 1901 Ades Synagogue in Aleppo, Syria, the Village Shul in Toronto and the new Jewish Chapel at the United States Naval Academy, in Annapolis, Maryland.

Churches have used Jerusalem stone in a similar manner. A Pentecostal church in São Paulo, Brazil recently ordered $8 million worth of Jerusalem stone to construct a Replica of the Temple of Solomon, or Templo de Salomão that will stand 180 feet tall.[12]

In 1923, Aharon Grebelsky established the country's first Jewish-owned marble quarry in Jerusalem. Grebelsky's son Yechiel expanded the business, employing over 100 workers, including quarriers, stonemasons, fabricators and installers. Today, the company is a major exporter of Jerusalem stone and a leading supplier to the North American market. It inaugurated a new, state-of-the-art factory in Mitzpe Ramon in January 2000. [13]