Dobromir, known to the Byzantines as Chrysos (Bulgarian: Добромир Хриз, Greek: Δοβρομηρός Χρυσός), was a leader of the Vlachs[1] and Bulgarians while Alexios III Angelos was Byzantine emperor. He became prominent in 1197 and is last heard of in 1202. He was a feudal ruler in Eastern Macedonia. 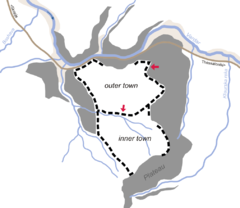 Plan of the fortress Prosek, seat of the Dobromir Chrysos

He was already married, but in order to cement an alliance with him the Emperor offered him a daughter of the Byzantine warlord Manuel Kamytzes. She was forced to divorce her husband and to marry Dobromir in 1198. About 1200 he took a third wife, the Emperor's granddaughter Theodora Angelina, who had previously been married to a rival leader, Ivanko and was afterwards to marry Leopold VI of Austria.

In 1202 the lands of Dobromir Chrysos were conquered by Bulgarian emperor Kaloyan.