Computing Machinery and Intelligence, written by Alan Turing and published in 1950 in Mind, is a seminal paper on the topic of artificial intelligence in which the concept of what is now known as the Turing test was introduced to a wide audience.

Turing's paper considers the question "Can machines think?" Since the words "think" and "machine" can't be defined in clear way that satisfies everyone, Turing suggests we "replace the question by another, which is closely related to it and is expressed in relatively unambiguous words."[1] To do this, he must first find a simple and unambiguous idea to replace the word "think", second he must explain exactly which "machines" he is considering, and finally, armed with these tools, he formulates a new question, related to the first, that he believes he can answer in the affirmative. 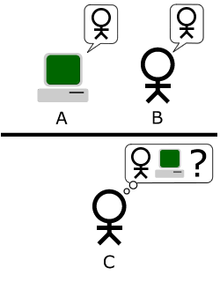 The "standard interpretation" of the Turing Test, in which player C, the interrogator, is tasked with trying to determine which player - A or B - is a computer and which is a human. Image adapted from [2]
Main article: Turing test

Rather than trying to determine if a machine is thinking, Turing suggests we should ask if the machine can win a game, called the "Imitation Game". It involves three participants in isolated rooms: a computer (which is being tested), a human, and a (human) judge. The human judge can converse with both the human and the computer by typing into a terminal. Both the computer and human try to convince the judge that they are the human. If the judge cannot consistently tell which is which, then the computer wins the game.[3]

As Stevan Harnad notes,[5] the question has become "Can machines do what we (as thinking entities) can do?" In other words, Turing is no longer asking whether a machine can "think"; he is asking whether a machine can act indistinguishably[6] from the way a thinker acts. This question avoids the difficult philosophical problem of pre-defining the verb "to think" and focuses instead on the performance capacities that being able to think makes possible, and how a causal system can generate them.

Some have taken Turing's question to have been "Can a computer, communicating over a teleprinter, fool a person into believing it is human?" [7] but it seems clear that Turing was not talking about fooling people but about generating human cognitive capacity.[8]

Turing also notes that we need to determine which "machines" we wish to consider. He points out that a human clone, while man-made, would not provide a very interesting example. Turing suggested that we should focus on the capabilities of digital machinery—machines which manipulate the binary digits of 1 and 0, rewriting them into memory using simple rules. He gave two reasons.

First, there is no reason to speculate whether or not they can exist. They already did in 1950.

This allows the original question to be made even more specific. Turing now restates the original question as "Let us fix our attention on one particular digital computer C. Is it true that by modifying this computer to have an adequate storage, suitably increasing its speed of action, and providing it with an appropriate programme, C can be made to play satisfactorily the part of A in the imitation game, the part of B being taken by a man?"[9] This question, he believes, can be answered without resorting to speculation or philosophy. It has become a straightforward question of software engineering.

Hence Turing states that the focus is not on "whether all digital computers would do well in the game nor whether the computers are present available would do well, but whether there are imaginable computers which would do well".[citation needed] What is more important is to consider the advancements possible in the state of our machines today regardless of whether we have the available resource to create one or not.

Having clarified the question, Turing turned to answering it: he considered the following nine common objections, which include all the major arguments against artificial intelligence raised in the years since his paper was first published.[10]

Turing ends the paper by speculating about how a machine that can pass the test could be designed. His discussion emphasizes the role of machine learning.