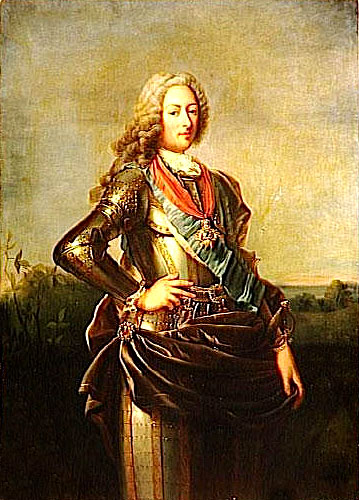 Louis, Duke of Orléans (, &ndash; , ) was a member of the royal family of France, the , and as such was a . At his father's death, he became the ("Premier Prince du Sang"). Known as "Louis le Pieux" and also as "Louis le Génovéfain", Louis was a pious, charitable and cultured prince, who took very little part in the politics of the time.

Louis was born at the in 1703 to and his wife, , the second "Mademoiselle de Blois" and youngest illegitimate daughter of Louis XIV. At his birth, he was titled .

He was brought up by his mother and his grandmother, , and tutored by Nicolas-Hubert Mongault, the illegitimate son of Jean-Baptiste Colbert de Saint-Pouange, a cousin of , Louis XIV's minister. Louis was very close to his younger sister , who was to become of for seven months in 1724. [Marie-Estelle Gordien, " [http://theses.enc.sorbonne.fr/document12.html Louis d'Orléans (1703-1752), premier prince du sang et mystique érudit] ", Thèses de l'École nationale des chartes, France (2002).]

As the "third personage of the kingdom" immediately after Louis XV and his own father, the Regent, he was formally admitted to the "Conseil de Régence" on January 30, 1718, although he was never to play an overly public or political role. The following year, he was made the Governor of although he was not required to live in that province. Later, he gave the title back to the Crown. In 1720, he became "Grand master of the Order of and ", and, in 1721, under his father's influence, he was named "Colonel général de l'Infanterie" and held that post till 1730.

At the death of his father on , , the twenty-year old Louis became and as such head of the House of Orléans. He was also next in line of succession to the throne until the birth of Louis XV's first-born son in 1730 because King , the second son of the Grand Dauphin, had renounced his rights to the throne of France for himself, and his descendants, upon his accession to the throne of Spain in 1700. Although his father, the Regent, had wanted him to play as high a role as he and his grandfather had played, upon the Regent's death, the post of Prime minister went to Louis' cousin, , who was eleven years his senior.

The fifth child and only son out of eight children, Louis was still not married at the death of his father. In 1721, the ambassador of France to Russia had suggested a marriage between Louis and one of the two unmarried daughters of : the Grand Duchess Anna Petrovna (known for her fluency in French) or her younger sister, Grand Duchess Natalia Petrovna. But the idea of a marriage with a Russian had to be abandoned as there soon arose difficulties relative to religion and order of precedence: Louis was "only" a genuine Great-Grandson of France as 's great-grandson and, as a result, he was addressed as Your "" while a Russian Grand Duchess daughter of the Tsar was addressed as Your "".

Another possible bride was his first cousin Élisabeth-Alexandrine de Bourbon-Condé. She the youngest daughter of his aunt the duchesse de Bourbon. It was his mother who would agree to the actual future wife of her son.

Later on in 1723, a German princess was suggested. She was (1704&ndash;1726), the daughter of and his wife . The marriage was agreed upon and the bride's small dowry set at 80,000 livres. The marriage by proxy took place on , at , in , [Antoine de Nadaillac, "Généalogie et Dynasties Européennes: La Dynastie des Capétiens: La Maison d'Orléans": [http://mapage.noos.fr/aden-osteo/Orleans.html] ] , then on in the town of Sarry (), in France. [ib. Antoine de Nadaillac: [http://mapage.noos.fr/aden-osteo/Orleans.html] ] It was at Sarry that the couple first met. They fell in love at first sight [Claude Dufresne, "Les Orléans", Critérion, Paris, 1991, chapter "Un prince par trop dévot", p. 181.] . At the French court, the new Duchess of Orléans was known as "Jeanne de Bade".

The ducal couple had two children but only one survived infancy:

On , , the court celebrated the marriage of to at ; the marriage by proxy, at which Orléans had represented Louis XV, had taken place the previous at . ["Nouvelle biographie générale depuis les temps les plus reculés jusqu'à nos jours", Firmin Didot Frères, Paris, 1862, Tome 38, p. 822: http://books.google.com/books?id=NvUOAAAAYAAJ&pg=RA4-PA819-IA1&lpg=RA4-PA819-IA1&dq=mariage+du+duc+d'Orl%C3%A9ans+avec+Auguste+Marie+Jeanne+de+Bade&source=web&ots=NU7jjbXRXb&sig=5_p6649n1PcDZQIAw9XXsiUbHXA&hl=fr&sa=X&oi=book_result&resnum=4&ct=result]

The following year, on , , the duc's young wife died three days after the birth of her second child, Louise Marie, at the in Paris.

After the early death of his wife, and until his own death in 1752, Louis lived by strict rules. In 1730, secured the duke's dismissal from the position of colonel-general of the infantry, a post he had held for nine years. It was around 1740, that he ordered the employment of a High PriestFact|date=July 2008 at the Palais Royal to stay with him while he was in ill health. He later decided to retire at the Abbaye Sainte-Geneviève de Paris [in French: http://209.85.215.104/search?q=cache:83D8cjIaxtQJ:www.pierre-abelard.com/itin-Genevieve.htm+abbaye+Sainte+Genevi%C3%A8ve&hl=fr&ct=clnk&cd=4&gl=us] , and from this time on, he became known as "Louis le Génovéfain" [Member of the Saint Genevieve congregation (of the Augustine order), from the Latin "Genovefa": Genevieve. Saint Geneviève is the patron saint of Paris.] . As he retired into private life, Louis spent his time translating the and the , protecting men of science and managing his wealth. [ib. Claude Dufresne, pp. 177-188.] Like his cousin, the duc de Penthièvre, he was praised for his charitable works.

His son, Louis Philippe would have liked to marry Henriette, the second daughter of Louis XV, but Louis XV refused as he did not want to give the House of Orléans the power it had had during the Regency of. [Claude Dufresne, chapter: "Un "bon gros prince", pp. 189 & 192.]

On , , Chartres then married , the daughter of Louis Armand II, Prince of Conti and his wife, . The two families had been at odds for generations and it was hoped that the marriage would settle their "mésentente". Although passionate at first, the marriage soon proved unhappy because of the young bride's débaucherie. [Claude Dufresne, chapter "Un "bon gros prince", p. 191-195.]

He died 1752, at the age of forty-eight, at the "Abbaye de Sainte Geneviève", having lost most of his sanityFact|date=July 2008. On his deathbed, on suspicion of Jansenist views, he was refused communion by the Abbé Bouettin of the church, but was given the last rites by his own chaplain [ib. Firmin Didot Frères, "Nouvelle biographie générale...", p. 823-824.] . Louis d'Orléans had outlived all his siblings apart from Charlotte Aglaé, the Duchess of Modena and Reggio.