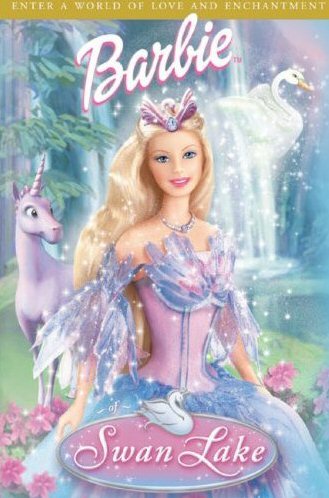 "Barbie of Swan Lake" is a 2003 direct-to-video film directed by Owen Hurley. It is the third in the of computer animated films, and features the voice of as Barbie. The story is loosely adapted from the ballet and features the music of . This is the third and final film narrated by Barbie to her little sister Kelly. It is also the second to be based on a Tchaikovsky ballet, the first being "".

The story is being told by to her little sister , who is feeling uneasy about being at camp overnight for the first time.

The story begins when Odette follows a unicorn named Lila into an Enchanted Forest. Lila becomes trapped and Odette takes a magic crystal, unaware that the fairy queen is watching . She uses it to free Lila and the fairy queen tell Odette that she is the chosen one for the crystal chose her but letting her take it away from the tree. Rothbarth appears in the wood with his daughter cornering Odette by a tree. There she is trapped and transformed into a swan by the evil wizard Rothbart, who wants to use Odette and the crystal to defeat his enemy the Fairy Queen. The Fairy Queen is able to partially counter the spell so that Odette retains her human form by night, although she will still have to turn into a swan by day.

One day Odette meets Prince Daniel, and it is love at first sight. Daniel asks Odette to a ball and she accepts. When Rothbart learns of this, he transforms his daughter Odile to look like Odette in the eyes of the Prince. At the ball Prince Daniel pledges his love to Odile, thinking her to be Odette. Odette was trapped out side still in swan form and unable to tell daniel about the trap . Odette in great shock faints giving Rothbart the chance to take the crystal.

However Odette together with her animal friends managed to out smart Rothbart's intention with the two for one policy. In the end the real Odette and Prince Dainel confess their love for each other. Everyone from the village that the Enchanted forest celebrates. It is also seen that Odette's father giving his daughter to Prince Daniel for a dance as they begin their journey together. Rothbart was turned into a Cuckoo Clock while Odile is made into a maid. It also ends with kelly saying "I am glad Odette did not stay a swan forever" Also Odette and Prince Daniel lives happily ever after.