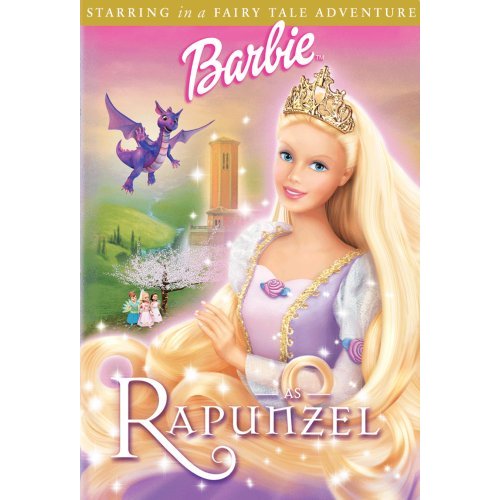 "Barbie as Rapunzel" is a 2002 direct-to-video film directed by Owen Hurley. It is the second in in the of computer animated Barbie films, and features the voice of as Barbie. The story is adapted from the fairy tale "".

The story is being told by Barbie to her little sister Kelly, who does not have confidence in her abilities.

Rapunzel lives as a servant to the witch Gothel, who resides in a castle isolated in the woods. She grows up believing that Gothel saved her from abandonment as an infant. Rapunzel finds companionship in Penelope, a timid , and Hobie, a worrisome . Rapunzel spends what free time she has painting pictures of her friends.

One afternoon, while preparing tea for Gothel, Rapunzel and her animal friends find a secret staircase which leads to an old room below the manor. In it they discover a gift from her parents who allegedly deserted her: a silver hairbrush engraved with the following: “Constant as the stars above, always know that you are loved. To Rapunzel on her first birthday. Love always, mother and father.” These words leave the young artist questioning her past for the first time. Her diversion is quickly interrupted by Gothel’s calls for tea.

After serving Gothel her meal, Rapunzel and her friends revisit the cellar where they expose yet another secret: a tunnel leading to the nearby village. Rapunzel takes this path to the small kingdom and is able to rescue a princess named Katrina from a pitfall. For her good deed, Rapunzel is introduced to Katrina’s elder brother, the Prince Stefan. He explains to her that the trap Katrina managed to escape was put there by King Wilhelm, the ruler of an opposing kingdom. Enchanted by the mysterious maiden, Stefan asks to meet her again, to which she agrees, though their meeting is ended abruptly when she quickly rushes back to the woods to avoid being discovered by Gothel. Unknown to Rapunzel, Gothel’s pet ferret, Otto, has witnessed the entire exchange.

Gothel punishes Rapunzel for her behavior, transforming her bedroom into a high and stations Hugo, Penelope’s father, outside. Gothel refuses to let Rapunzel go until she tells her the name of the boy she met. Rapunzel is left alone with Hobie and Penelope, who cheer her up with new paint to replace the ones taken away from by Gothel. The hairbrush, which turned into a , has magical properties and whatever Rapunzel paints comes to life. She paints her way out of the tower by creating a into the palace s and continues to secretly meet with Stefan.

Once again, Gothel discovers the truth and destroys Rapunzel's magic paintbrush and the paintings she'd made. Because she thinks Rapunzel refused to tell the truth, Gothel puts a spell around her tower, which holds people who lie forever and can never be broken. An angered Gothel storms to King Frederick and Stefan's castle, intent on destroying them. Back at the tower, Rapunzel manages to escape with the help of Penelope (the spell only works if the prisoner is a liar) and rushes to save Stefan.

Wilhelm appears before Frederick, hoping to end the feud by force. It is revealed the source of the feud was because he believes Frederick kidnapped his daughter, who has been missing since she was an infant. Frederick replies that he planned nothing of the sort and he has no idea where Wilhelm's daughter is. Gothel arrives just in time to stop them from fighting and Wilhelm recognizes her. It is revealed that Gothel has loved Wilhelm and was broken-hearted when she learned that he only looked to her as a friend.

A brief skirmish ensues, eventually resulting in Gothel, after refusing Rapunzel's forgiveness, entering the enchanted tower and being unable to leave due to her spell. Otto is then forced to do all the labour for her. Rapunzel is reunited with her parents, and marries Stefan, thus their fathers reconcile to re-unite their kingdoms.

:*The film was rated a B- by "" magazine. [ [http://www.ew.com/ew/article/0,,363779,00.html Barbie as Rapunzel | Video Review | Entertainment Weekly ] ] :*cite news | author=Moira McCormick | url= | title=Barbie Returns In 'Rapunzel' | publisher=Billboard | date= | quote=The Barbie as Rapunzel campaign expands on many of the promotional components from Mattel's , which had a 94% sell-through rate and sales of more than 3.5 million units. Print ads started one week before street date, and Ross says they are expected to generate 260 million consumer impressions through the end of the year. TV spots also began airing on Nickelodeon and the Cartoon Network in August. :*cite news | author=Scott Hettrick | url= | title=BARBIE'S HAIR-RAZING TALE | publisher= | date= | quote=Anjelica Huston delivers an entertainingly menacing voice as evil Gothel and the producers have imbued the much more simplistic but typically dour original tale with multiple characters that kids will find engaging. :*cite news | author=Chris J. Parker | url= | title='Rapunzel' Barbie trades hairbrush for paintbrush | publisher= | date= | quote=The movie is enhanced by its soundtrack, which features music performed by the . The computer-generated animation is still a bit clumsy, especially in this post-"" era. But it's watchable, especially for younger viewers. :*cite news | author=Neil Buckley | url= | title=Barbie's new roles play to a new audience: Making a movie star was a smart move for Mattel, says Neil Buckley | publisher= | date= quote=Her 2002 film, the 76-minute Barbie as Rapunzel, with the voice of actress Anjelica Huston as the evil witch Gothel, was a bigger success... It tied in with merchandise including a Barbie as Rapunzel doll - with the longest hair of any Barbie since her creation - dolls representing the other characters, an "Enchanted Tower" playset and a range of themed products, including denim jackets, watches, backpacks, musical hairbrushes and hair extension gift sets.