Barbie as the Princess and the Pauper

Barbie as the Princess and the Pauper

Infobox Film
name = Barbie as the Princess and the Pauper 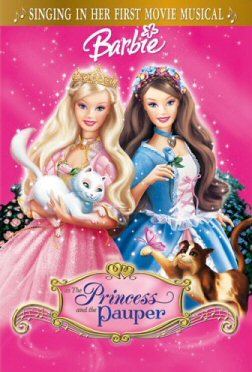 "Barbie as the Princess and the Pauper" is a 2004 direct-to-video film, and the first musical in the . It is directed by William Lau and stars the voice of , who has been voicing Barbie in all the CGI films to date, as both Anneliese and Erika. The story is loosely inspired by the novel "", but it is unrelated to the 1939 film "".

Songs for the movie are written by Amy Powers, Megan Cavallari and Rob Hudnut, who also Executive Produced the film.

In an unnamed mountain kingdom, a and a are born simultaneously and grow up unaware that their facial features are identical to each other. The princess, Anneliese, craves freedom from her royal duties, especially when she is informed by her widowed mother, Queen Genevieve, that she must marry the wealthy king of a nearby kingdom because their own royal treasury is nearly bankrupt. The pauper, Erika, craves a different sort of freedom, as she is an indentured servant at the bullish Madam Carp's Dress Emporium to work off her parents' debt.

Anneliese's tutor, Julian, is sad that Anneliese will be getting married; Anneliese and Julian have feelings for each other, but believe that there is nothing that can be done about it. As a treat, Julian decides to take Anneliese into town for a last taste of freedom. There, Anneliese crosses paths with Erika. The girls are shocked to see how identical they are, the only differences between them being their hair color/style and the crown-shaped birthmark on Anneliese's right shoulder. The two become friends, but Anneliese has to quickly return to the palace.

On the same night, Anneliese is kidnapped by Nick and Nack, who plant a fake letter stating Anneliese "ran away" in order to avoid being married to King Dominick. Julian suspects that it was a kidnapping with Preminger as the mastermind, so he asks Erika to impersonate the princess until he can rescue the real Anneliese. Erika agrees to the temporary ruse to help her friends, and surprises Preminger when she arrives to welcome King Dominick. Dominick and Erika fall in love, despite Erika's fear of being rejected when she is revealed to be an imposter.

Meanwhile, Anneliese manages to escape from Nick and Nack, but is turned away from the palace by a guard, who believes "Anneliese" is in the palace with Dominick and the Queen. Anneliese is mistaken for Erika by Madame Carp, and she is locked in the Dress Emporium. Preminger, who has started to suspect that Erika is a fake, discovers the real Anneliese at the Dress Emporium and takes her away to the gold mines, where a captured Julian is already being held prisoner.

Now knowing the truth, Preminger returns to the castle where he exposes Erika as a fraud and claims that she had conspired with Julian to kill and replace the real princess. Erika, unable to prove her good intentions, is locked in the dungeon. She manages to escape, and bumps into Dominick, who reveals that he doesn't believe that Erika is guilty of Preminger's accusation. Elsewhere, Anneliese and Julian work together to escape the mines.

Preminger, in the wake of Anneliese's supposed death, has convinced Queen Genevieve to marry him in order to save the kingdom. Although Queen Genevieve loathes him, she cannot see any other option. Just as the ceremony is about to complete, Anneliese arrives. The true story is revealed and Preminger gets his just rewards.

Anneliese confesses to her mother that she loves Julian and does not wish to marry King Dominick. She has also solved the problem of the kingdom's gold shortage; the rocks discarded by the miners are actually precious geodes and the mine is full of them. Dominick confesses to loving Erika for who she is and if she should choose to, he would be willing to marry her. With Madam Carp out of business (thanks to Anneliese taking her business elsewhere), Erika chooses not to accept just yet and achieves her dream of being able to sing around the world, discovering that the place she would really like to sing is among her friends. She returns several months later and marries Dominick while Anneliese marries Julian in a double wedding.

This film is the first musical in the series of CGI films. An official soundtrack album has not been released to date. The songs in the film are, in chronological order: