Barbie and the Magic of Pegasus

Barbie and the Magic of Pegasus

Infobox Film
name = Barbie and the Magic of Pegasus 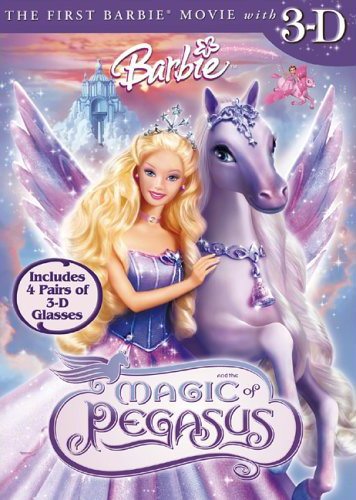 recorded a song titled "Hope Has Wings" for this film, and the DVD includes the music video as a bonus feature.

A line of toys were produced to go with the film, including dolls of Princess Annika, Aiden (called "Prince Aiden" on the box), Rayla the Cloud Queen, and Princess Brietta. Later a doll of Annika was produced with the Mini Kingdom birthday line.

In a magical kingdom, the Queen wants to surprise her daughter, Princess Annika, with a birthday gift. When she opens the door to Annika's room, she discovers that Annika is missing, having gone to an ice rink without asking for permission. Out skating, Annika meets a small polar bear whom she names Shiver. When Annika returns to the palace, her parents are worried and forbid her from skating ever again.

One night, Annika sneaks out of the palace to join a festival. A powerful wizard named Wenlock appears and asks the princess to marry him. When Annika refuses, Wenlock furious tells the king and queen the fate of their "other daughter", which surprises Annika. Wenlock magically turns everyone into stone, but Annika is saved by Brietta, a flying horse, as Wenlock tells her that she has three days to marry him.Brietta takes Annika to a castle in the clouds called the Cloud Kingdom. There Annika discovers that "the other daughter" of the king and queen, is Brietta, and was transformed by Wenlock into a Pegasus. Annika decides to build the "Wand of Light" to break Wenlock's spell. In order to accomplish this, they travel to the Forbidden Forest, where they meet a young man named Aidan who helps them. With the aid of Aidan, Annika assembles the "Wand of Light" that transforms Brietta back into her human form.

Brietta and Annika return to the Cloud Kingdom, but Wenlock pursues them, hurting Brietta and trapping Annika under a pile of snow. Aidan helps to dig Annika out. Together, the trio go to Wenlock's place, where they engage him in battle. Eventually defeating him, they break the spell on Annika's parents(who are shocked to see Brietta), and the entire family celebrates together. The end scene shows the trio skating in the cloud palace. Both Aidan and Annika are wearing crowns, signifying that they have gotten married. Brietta remarks that they look happy, and gifts the Cloud Queen with the Wand, who replies that it will be the first star at night.