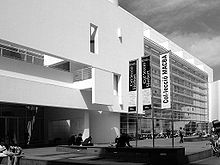 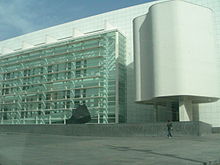 History of the Museum

In 1959, art critic Alecandre Cirici Pellicer formed a group of contemporary artists showing work in a series of 23 exhibitions with the hopes of beginning a collection for a new contemporary art museum in Barcelona. It was not until 1986 that the Barcelona City Council recommended the American architect Richard Meier & Partners (1987–1995) to design the museum. Art critics Francesc Miralles and Rosa Queralt were hired to write the museum’s mission statement. In 1987, the MACBA Foundation was created. In the following year the MACBA Foundation, in conjunction with the Generalitat de Catalunya and the Barcelona City Council, founded the MACBA Consortium in order further the process of the museum. The Consortium commissioned Meier later that year to build the museum. [1] This was a controversial issue considering that the museum had no collection at the time of construction. Nevertheless, Meier embraced the difficult task of creating a building that would ultimately display a variety of contemporary artworks that were unknown to him at the time of design. The choice to build the museum in the Plaça dels Ángels is consistent with Meier’s vision to situate the building amongst some of Barcelona’s oldest streets and buildings, in addition to revamping the public space of the Raval.[2] After the completion of the $35 million construction, local media referred to the museum as “the pearl” amongst the old architecture and narrow streets just a few blocks from Gothic center of Barcelona.[3] The building’s architectural style has strong references to Modernism. The large (120 by 35 meters) white building has much of its southern elevation glazed, providing the visitor with views across the plaza, and allowing for an abundance of natural light to illuminate the interior galleries.

The Foundation manages the permanent collection, which dates from the mid-20th century onward. There are three periods of modern art represented: the first one covers the forties to the sixties; the second spans the sixties and seventies; the third period is contemporary. The collections focus on post-1945 Catalan and Spanish art, although some International artists are also represented.[citation needed] The permanent collection, as well as temporary exhibitions, seek to examplify the Foundation’s mission, stated below:

“Through the Collection and the exhibition/activities calendar, the MACBA hopes to construct a critical memory of Art of the latter half of the 20th century, with two objectives: to oppose rhetoric and hegemonic forces which tend to mythologize the local-national while exploiting cultural institutions as active agents of tertiary economics in urban centres; and to present alternatives for the insufficiencies of the dominant museum model, which is generally based on the universalist myth of the original work presented as spectacle. Working from the concept that there is no “public;” only “publics” consisting of specific and differentiated groups, the museum ceases to be a mere producer of exhibitions and becomes a purveyor of different services for different subjects. The exhibition is then an experience on a par with that of workshops, conferences, audiovisual activities, publications, etc. All of these experiences are defined by a series of discursive lines which lend thematic coherence” MACBA Website. [1]

In December 2007, the museum opened its Study Center, enhancing the educational aspect which is integral to the museum’s mission. The Library Reading Room and Special Collections Room grant the public free access to the museum’s books, publications collection, and archives.

MACBA offers a variety of events including lectures, seminars, guided tours, video screenings etc. in order to broaden the educational opportunities available to the public.

The Museum address is Plaça dels Angels, 1, Barcelona. The closest metro stations are Catalunya and Universitat.

Opposite the main museum, in the medieval Convent dels Àngels for which the square is named, a chapel has been converted into a separate exposition area known as the Capella del MACBA, with regular video art performances. Entrance to this part of the museum is free.

Another contemporary art museum, Centre de Cultura Contemporània de Barcelona (CCCB), is adjacent to MACBA, and accessible both from the street and from the inner patio.

Skateboarder ollies over a set of stairs at MACBA

The surrounding square and architecture outside of the museum is among the most well-known and respected places for modern skateboarding. Together with surrounding places in Barcelona, it is a meeting ground in youth culture due to its reputation in the world of skateboarding photography and cinema.