David is a masterpiece of Renaissance sculpture created between 1501 and 1504, by the Italian artist Michelangelo. It is a 5.17 metre (17 feet)[1] marble statue of a standing male nude. The statue represents the Biblical hero David, a favoured subject in the art of Florence.[2] Originally commissioned as one of a series of statues of prophets to be positioned along the roofline of the east end of Florence Cathedral, the statue was instead placed in a public square, outside the Palazzo della Signoria, the seat of civic government in Florence, where it was unveiled on 8 September 1504. Because of the nature of the hero that it represented, it soon came to symbolize the defense of civil liberties embodied in the Florentine Republic, an independent city-state threatened on all sides by more powerful rival states and by the hegemony of the Medici family. The eyes of David, with a warning glare, were turned towards Rome.[3] The statue was moved to the Accademia Gallery in Florence in 1873, and later replaced at the original location by a replica.

The history of the statue begins before Michelangelo's work on it from 1501 to 1504.[4] Prior to Michelangelo's involvement, the Overseers of the Office of Works of the Duomo (Operai), consisting mostly of members of the influential woolen cloth guild, the Arte della Lana, had plans to commission a series of twelve large Old Testament sculptures for the buttresses of the cathedral of Santa Maria Del Fiore.[5] One of those statues had been made by Donatello in 1410 - a figure of Joshua made of terracotta - and a second, also a terracotta, but this time of Hercules, was commissioned from the Florentine sculptor Agostino di Duccio in 1463; scholars suggest that Agostino was working under Donatello's direction.[6] Eager to continue their project, in 1464, the Operai contracted Agostino to create a sculpture of David. A block of marble was provided, from a quarry in Carrara, a town in the Apuan Alps in northern Tuscany. Agostino only got as far as beginning to shape the legs, feet and the torso, roughing out some drapery and probably gouging a hole between the legs. His association with the project ceased, for reasons unknown, with the death of Donatello in 1466, and ten years later Antonio Rossellino was commissioned to take up where Agostino had left off.

Rossellino's contract was terminated soon thereafter, and the block of marble remained neglected for twenty-five years, all the while exposed to the elements in the yard of the cathedral workshop. This was of great concern to the Opera authorities, as such a large piece of marble not only was costly but also represented a large amount of labour and difficulty in its transportation to Florence. In 1500, an inventory of the cathedral workshops described the piece as "a certain figure of marble called David, badly blocked out and supine."[7] A year later, documents showed that the Operai were determined to find an artist who could take this large piece of marble and turn it into a finished work of art. They ordered the block of stone, which they called The Giant, "raised on its feet" so that a master experienced in this kind of work might examine it and express an opinion. Though Leonardo da Vinci and others were consulted, it was Michelangelo, only twenty-six years old, who convinced the Operai that he deserved the commission. On August 16, 1501, Michelangelo was given the official contract to undertake this challenging new task.[8] He began carving the statue early in the morning on Monday, September 13, a month after he was awarded the contract. He would work on the massive biblical hero for more than two years.

On January 25, 1504, when the sculpture was nearing completion, Florentine authorities had to acknowledge there would be little possibility of raising the more than 6-ton statue to the roof of the cathedral.[9] They convened a committee of 30 Florentine citizens that comprised many artists, including Leonardo da Vinci and Sandro Botticelli, to decide on an appropriate site for David.[10] While nine different locations for the statue were discussed, the majority of members seem to have been closely split between two sites: one group, led by Giuliano da Sangallo and supported by Leonardo and Piero di Cosimo, among others, believed that, due to the imperfections in the marble, the sculpture should be placed under the roof of the Loggia dei Lanzi on Piazza della Signoria; the other group thought it should stand at the entrance to the Palazzo della Signoria, the city's town hall. Only a rather minor view, supported by Botticelli, believed that the sculpture should be situated on or near the cathedral. In June, 1504 David was installed next to the entrance to the Palazzo Vecchio, replacing Donatello's bronze sculpture of Judith and Holofernes, which embodied a comparable theme of heroic resistance. It took four days to move the statue the half mile from Michelangelo's workshop into the Piazza della Signoria.[11]

In 1873 the statue of David was removed from the piazza, to protect it from damage, and displayed in the Accademia Gallery, Florence, where it attracts many visitors. A replica was placed in the Piazza della Signoria in 1910.

In 1991, a deranged man attacked the statue with a hammer he had concealed beneath his jacket,[12] in the process damaging the toes of the left foot before being restrained.

On 12 November 2010, a fiberglass replica [13] of the David was installed on the roofline of Florence Cathedral, for one day only. Photographs of the installation reveal the statue the way the Operai who commissioned the work originally expected it to be seen.

In 2010, a dispute over the ownership of David arose when, based on a legal review of historical documents, the Italian federal Culture Ministry claimed ownership of the statue in opposition to the city of Florence, where it has always been located. Florence disputes the state claim.[14][15]

Michelangelo's David differs from previous representations of the subject in that the Biblical hero is not depicted with the head of the slain Goliath, as he is in Donatello's and Verrocchio's statues. Most scholars consider that the work depicts David before his battle with Goliath.[16] Instead of appearing victorious over a foe much larger than he, David's face looks tense and ready for combat. The tendons in his neck stand out tautly; his nasolabial muscles are tight; his brow is furrowed; and his eyes seem to focus intently on something in the distance. Veins bulge out of his lowered right hand, but his body is in a relaxed contrapposto pose, and he carries his sling casually thrown over his left shoulder. 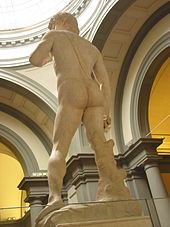 David from the back.

The pose is unlike that of any earlier David; Donatello and Verrocchio had both represented the hero standing victorious over the head of Goliath, and Andrea del Castagno had shown the boy in mid-swing, even as Goliath's head rested between his feet,[17] but no earlier Florentine artist had omitted the giant altogether. The contrast between his intense expression and his calm pose perhaps suggests that David is represented after he has made the decision to fight Goliath but before the battle has actually taken place. The majority of his weight is on his back leg, staying consistent with the Renaissance practice of depicting its subjects in recoiled, calm positions, just prior to action. It is a representation of the moment between conscious choice and conscious action.

A copy of the statue standing in the original location of David, in front of the Palazzo Vecchio in Florence.

Michelangelo's David is a Renaissance interpretation of a common ancient Greek theme of the standing heroic male nude. In the High Renaissance, contrapposto poses were thought of as a distinctive feature of antique sculpture. In David, the figure stands with one leg holding its full weight and the other leg relaxed. This classic pose causes the figure’s hips and shoulders to rest at opposite angles, giving a slight s-curve to the entire torso. In addition, the head turns to the left while the left arm is raised to his left shoulder with his sling flung down behind his back. Michelangelo’s David has become one of the most recognized works of Renaissance sculpture, becoming a symbol of both strength and youthful human beauty.

It was the colossal size of the statue that most impressed Michelangelo's contemporaries, however. Vasari described it as "certainly a miracle that of Michelangelo, to restore to life one who was dead," and then listed every ancient colossal statue he had ever seen, concluding that Michelangelo's work excelled "all ancient and modern statues, whether Greek or Latin, that have ever existed."[18] The proportions of the David are atypical of Michelangelo's work; the figure has an unusually large head and hands (particularly apparent in the right hand). These enlargements may be due to the fact that the statue was originally intended to be placed on the cathedral roofline, where the important parts of the sculpture would necessarily be accentuated in order to be visible from below. 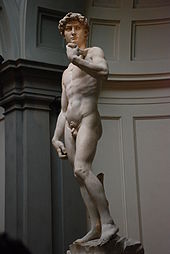 David seen from the left.

The statue is unusually slender (front to back) in comparison to its height. This may be the result of the work that had been done on the block before Michelangelo began carving it.

It is possible that the David was conceived as a political statue before Michelangelo began to work on it.[19] Certainly David the giant-killer had long been seen as a political figure in Florence, and images of the Biblical hero already carried political implications there.[20] Donatello's bronze David, made for the Medici family, perhaps c. 1440, had been appropriated by the Signoria in 1494, when the Medici were exiled from Florence, and the statue was installed in the courtyard of the Palazzo della Signoria, where it stood for the Republican government of the city. By placing Michelangelo's statue in the same general location, the Florentine authorities ensured that David would be seen as a political parallel as well as an artistic response to that earlier work.

Commentators have noted David's apparently uncircumcised penis, which is at odds with Judaic practice, but is considered consistent with the conventions of Renaissance art.[21]

In 1991 the foot of the statue was damaged by a deranged man with a hammer.[12] The samples obtained from that incident allowed scientists to determine that the marble used was obtained from the Fantiscritti quarries in Miseglia, the central of three small valleys in Carrara. The marble in question contains many microscopic holes that cause it to deteriorate faster than other marbles. Because of the marble's degradation, from 2003 to 2004 the statue was given its first major cleaning since 1843. Some experts opposed the use of water to clean the statue, fearing further deterioration. Under the direction of Dr. Franca Falleti, senior restorers Monica Eichmann and Cinzia Pamigoni undertook the job of restoring the statue.[22]

In 2008, plans were proposed to insulate the statue from the vibration of tourists' footsteps at Florence's Galleria dell'Accademia, to prevent damage to the marble.[23] 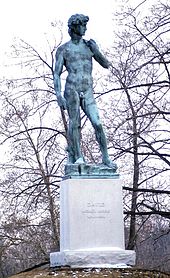 The statue has been reproduced many times. The plaster cast of David at the Victoria and Albert Museum has a detachable plaster fig leaf which is displayed nearby. The fig leaf was created in response to Queen Victoria's shock upon first viewing the statue's nudity, and was hung on the figure prior to royal visits, using two strategically placed hooks.[24]

By the 20th century, Michelangelo's David had become iconic shorthand for "culture".[25] David has been endlessly reproduced,[26] in plaster and imitation marble fibreglass, signifying an attempt to lend an atmosphere of culture even in some unlikely settings, such as beach resorts, gambling casinos and model railroads.[27]