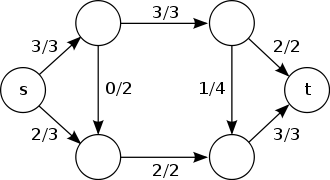 An example of a flow network with a maximum flow. The source is s, and the sink t. The numbers denote flow and capacity.

In optimization theory, the maximum flow problem is to find a feasible flow through a single-source, single-sink flow network that is maximum.

The maximum flow problem can be seen as a special case of more complex network flow problems, such as the circulation problem. The maximum value of an s-t flow is equal to the minimum capacity of an s-t cut in the network, as stated in the max-flow min-cut theorem. 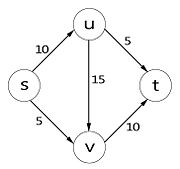 A flow network, with source s and sink t. The numbers next to the edge are the capacities.

be a network with

being the source and the sink of

The capacity of an edge is a mapping

. It represents the maximum amount of flow that can pass through an edge.

A flow is a mapping

, subject to the following two constraints:

(capacity constraint: the flow of an edge cannot exceed its capacity)
2.

The value of flow is defined by

is the source of

. It represents the amount of flow passing from the source to the sink.

The maximum flow problem is to maximize

, that is, to route as much flow as possible from

We can define the Residual Graph, which provides a systematic way to search for forward-backward operations in order to find the maximum flow.

Given a flow network

, we define the residual graph

is the same as that of

is with a capacity of

is with a capacity of

The integral flow theorem states that

If each edge in a flow network has integral capacity, then there exists an integral maximal flow. 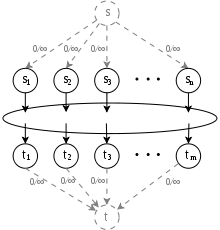 Given a network N = (V,E) with a set of sources S = {s1, ..., sn} and a set of sinks T = {t1, ..., tm} instead of only one source and one sink, we are to find the maximum flow across N. We can transform the multi-source multi-sink problem into a maximum flow problem by adding a consolidated source connecting to each vertex in S and a consolidated sink connected by each vertex in T with infinite capacity on each edge (See Fig. 4.1.1.).

Given a directed acyclic graph G = (V, E), we are to find the minimum number of paths to cover each vertex in V. We can construct a bipartite graph G' = (Vout∪Vin, E' ) from G, where

Then it can be shown that G' has a matching of size m if and only if there exists n-m paths that cover each vertex in G, where n is the number of vertices in G. Therefore, the problem can be solved by finding the maximum cardinality matching in G' instead.

Fig. 4.3.1. Transformation of a maximum bipartite matching problem into a maximum flow problem

Given a bipartite graph G = (X∪Y, E), we are to find a maximum cardinality matching in G, that is a matching that contains the largest possible number of edges. This problem can be transformed into a maximum flow problem by constructing a network N = (X∪Y∪{s,t}, E' }, where 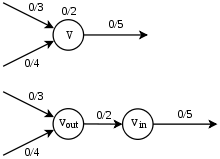 Given a network N = (V, E), in which there is capacity at each node in addition to edge capacity, that is, a mapping c: V→R+, denoted by c(v), such that the flow f has to satisfy not only the capacity constraint and the conservation of flows, but also the vertex capacity constraint

In other words, the amount of flow passing through a vertex cannot exceed its capacity.

To find the maximum flow across N, we can transform the problem into the maximum flow problem in the original sense by expanding N. First, each v∈V is replaced by vin and vout, where vin is connected by edges going into v and vout is connected to edges coming out from v, then assign capacity c(v) to the edge connecting vin and vout (See Fig. 4.4.1). In this expanded network, the vertex capacity constraint is removed and therefore the problem can be treated as the original maximum flow problem.

Given a directed graph G = (V, E) and two vertices s and t, we are to find the maximum number of independent paths from s to t. Two paths are said to be independent if they do not have a vertex in common apart from s and t. We can construct a network N = (V, E) from G with vertex capacities, where

Then the value of the maximum flow is equal to the maximum number of independent paths from s to t.

Given a directed graph G = (V, E) and two vertices s and t, we are to find the maximum number of edge-disjoint paths from s to t. This problem can be transformed to a maximum flow problem by constructing a network N = (V, E) from G with s and t being the source and the sink of N respectively and assign each edge with unit capacity.