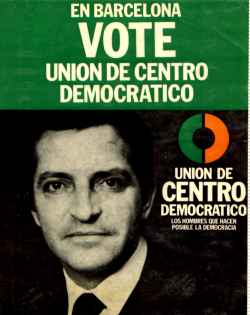 Suárez studied Law at the Salamanca University in and held several government posts during the late Francoist regime.

He became the Minister Secretary General of the National Movement ("Movimiento Nacional"), that acted as the single party, for 18 years and following the death of Franco in late 1975. For this reason, centrists and leftists opposed his appointment as President of the Government by King Juan Carlos in July 1976. Suárez, as a , was chosen by the monarch to lead the country towards a democratic, parliamentary without annoying the powerful conservative factions (especially the military) in the country. Surprising many observers and political opponents, Suárez introduced Political Reform in 1976 as a first, decisive step in the "Transition" ("La Transición") to democracy.

In 1977, he led the Democratic Center Union ("Unión de Centro Democrático", UCD) to victory in Spain's first free elections in 41 years, and became the first democratically elected prime minister after the Franco regime.

His centrist government instituted democratic reforms, and his coalition won again the 1979 elections under the new constitution. Less successful as a day-to-day organizer than as a crisis manager, he resigned as premier in 1981. [ Preston, Paul, "Juan Carlos: Steering Spain from Dictatorship to Democracy", page 457. Harper Perennial, 2005. ISBN-10: 0006386938 ] In 1982 he founded (Centro Democrático y Social, CDS) party, which never achieved the success of UCD. He retired from active politics in 1991, for political party and family reasons.

Suárez was awarded the "Príncipe de Asturias a la Concordia" award in September 1996, in recognition of his important personal contribution to Spanish democracy. The King of Spain made him in 1981. On 8 June 2007 on the celebration of the 30th anniversary of the first democratic elections, King named Suárez as Knight of the for his important role during the . [ [http://www.boe.es/boe/dias/2007/06/09/pdfs/A25291-25291.pdf] BOE 07-06-09, Spanish official journal, accessed 9 June 2007.]

Both his wife, Amparo Illana Elórtegui, and elder daughter, Marian Suárez Illana, suffered and died from (in 2001 and 2004, respectively). Another daughter, Sonsoles Suárez Illana, became a TV for Antena 3. Son Adolfo Suárez Illana was chosen by as the People's Party (PP) candidate for the post of president of the of , but lost against incumbent , of the (PSOE). Fact|date=February 2007 Suárez has two more siblings, Laura and Javier.

On 31 May 2005, his son, Adolfo Suárez Illana, announced on Spanish television that his father was suffering from (or a similar illness), which meant that he could no longer remember his period as . The announcement followed speculation about Suárez's health in the Spanish media.