Colorado Rocky Mountain School was founded in 1953 by John and Anne Holden, former faculty at the Putney School in Vermont. The school was envisioned as an expansion on the educational ideas of Carmelita Hinton at Putney. In addition to Hinton, the Holdens drew strongly upon the ideas of Kurt Hahn and John Dewey. The school's location in western Colorado facilitated experimentation as well as necessitating practical adaptation of the ideas of its eastern U.S and European-based influences.

The Holdens drove a green International truck west from Vermont and settled on Carbondale as a location for the school. They were able to buy a small piece of land and the school began in a ranch house on the property originally called the Big House (now renamed Holden House). Quickly encountering building space limitations, the Holdens, along with early students and faculty members, built or renovated much of the classroom and dormitory space themselves in the school's founding years. 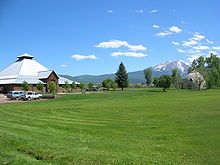 When Harald "Shorty" and Patsy Pabst donated the neighboring Bar Fork Ranch to the school long-term success became more achievable. The greatest landmark on the ranch was a large, one-hundred foot square hay barn built in 1897. Today the barn serves as a major hub of campus, hosting all-school meeting, theater productions, student music performances, and events for the larger town community. The library, music classrooms, and the main computer lab are also housed in the building. The barn, along with Mt. Sopris, a mountain to the south of Carbondale, serves as a symbol of the school, incorporated in its logo.

In its early years the school centered around its founders and found modest success, but also initiated some pioneering programs outside of the academic curriculum. Among these were seasonal Outward Bound style trips into the nearby mountains and desert lands, the nation's first high school kayaking program, distinguished athletic programs in downhill and cross-country ski racing, and, in a formalization of early all-school construction projects, campus work crews.

The school was not isolated from the social changes wrought during the 60s and 70s, but also encountered its own changes associated with growth and the retirement of its magnetic founders. The school necessarily began to temper some of its more improvised programs, incorporating a redoubled emphasis on safety.

Throughout the 1990s and into the 2000s, CRMS experienced increasing financial stability, an end to many of the drug and discipline issues that had been occasionally associated with the school in its middle years, and large growth in its day student population, which grew from near zero to roughly 40% of enrollment.

In late 2005, the board of trustees selected English faculty member and Dean of Students Jeff Leahy as the school's new Headmaster.

Academics make up the most important focus of the curriculum. Classes are small, with a 5:1 student-teacher ratio. They follow the Socratic Method of teaching, although the material and work remains fairly traditional. Many teachers, in the tradition of John Dewey, attempt to bring hands-on learning and experiential education into the classroom, as well as break down barriers confining the work and discussion to the classroom. Contemplation of classroom ideas is commonly extended into work crews, wilderness trips, and all-school meetings. 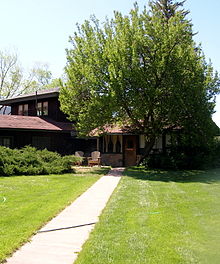 The second curricular focus is that of the arts. CRMS arts classes include ceramics, painting and drawing, sculpture, silversmithing, jazz and bluegrass music, and photography. The school has one of the only blacksmithing programs in the country, founded by well-known blacksmith Francis Whitaker. In recent years, glassblowing has also gained prominence, with work crews and an interim week program dedicated to it so far. The school owns a woodworking shop, but due to limited student interest, there is no program. Theater is a major extracurricular activity with two or three productions each year.

One curricular focus which draws many students to the school is the outdoor program. The first thing that new students do upon arriving at CRMS is embark on a ten day wilderness orientation trip. The trip consists of three days of trail maintenance work, and seven days of overland backpacking in the high mountains of the Fryingpan and Maroon Bells-Snowmass Wilderness areas. The outdoor program has two annual school-wide outdoor trips. The four-day Fall Trip primarily goes into the mountains for activities ranging from mountaineering to fly fishing to mountain biking. A week-long Spring Trip is carried out in the desert lands and rivers of the Colorado Plateau. During the winter, several weekend trips skiing and snoeshoeing into backcountry huts are also available.

The outdoor program is partially responsible for Interim, a ten day to two week period between third quarter and spring break. Interim replaced Project Week, a week at the end of each semester for intensive individual study of one subject. Interim accomplishes similar goals, except that subjects are studied in groups rather than individually, and Interim tends to be focused more off-campus. Recent interim offerings have included service learning, ecology, and language study trips to Costa Rica, Mexico, Nicaragua and New York City, on campus projects in music, art, and renewable energy, and community projects such as one with disabled skiers at Challenge Aspen. Seniors spend interim together as a class, working on a community service project. Since Hurricane Katrina, the school, along with the Carbondale community as a whole, has maintained a relationship with the town of Pearlington, Mississippi, with the senior interim focused on helping the rebuilding of that community.

The final focus in the CRMS curriculum is athletics. CRMS is well known for success in kayaking, cross-country and downhill skiing, telemark skiing, mountain biking, and rock climbing. The school also has programs in snowboarding, canoeing, tennis, cross-country running, soccer, and hiking. Most students play sports on two afternoons when they are not doing work crews. During the wintertime, two days a week are shortened to accommodate afternoon snowsports at the Aspen ski areas.