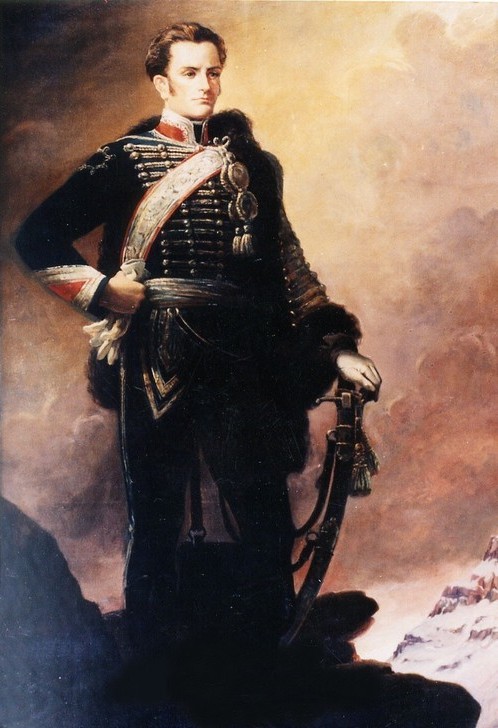 José Miguel Carrera Verdugo (, - , ) was a an general, considered one of the founders of independent . Carrera was the most important leader of the during the period of the ("Old Republic"). After the Spanish ("Reconquest"), he continued campaigning from exile. Eventually, he was executed in Mendoza, by the military of the (River Plate.)

He was born in Santiago, the oldest son (second child, after his sister, Javiera) of Ignacio de la Carrera y Cuevas and Francisca de Paula Verdugo Fernández de Valdivieso y Herrera. Carrera carried out his first studies in the "", the best school in the country at the time. During these years, he became friends with , classmate and neighbour, future guerrilla leader of the Chilean independence movement.

After school he was sent to by his parents. There he joined the in 1808. He fought well against the Napoleonic forces, obtaining the rank of Sergeant Major and receiving the command of the "" regiment.

In Spain he also made contact with the United States independence movement and joined the .

When he learned about the "Junta de Gobierno" that had been established in Chile to rule during the absence of the Spanish monarch, he went back to Chile and got involved in politics. As the Carreras were one of the three major political forces, he became part of the government. On the Carreras made a and José Miguel became the sole ruler of Chile. (His brothers were military commanders.) Because of his more personal and Chilean-national point of view about Chilean independence, Carrera came into conflict with the , whose more Latin-Americanist centered objective was to unite all Latin America in the same way as the ).

During his government, and influenced by , first United States envoy to Chile, he helped create several Chilean national symbols and institutions: Carrera created the first , made the first Chilean flag and coat of arms, and promoted the press by bringing to Chile the first printing press, which directly led to the appearance of the first newspaper in Chile (La Aurora de Chile). Carrera also established as the national day (which is still celebrated in Chile).

As the Spanish Army and Navy invaded the South of Chile, he became Commander in Chief of the patriotic forces and left the government. He had a successful campaign, expelling the Spaniards from the city of Concepción.

After the , in which Carrera was surrounded and had to jump into a river to save himself (not without first shooting straight at the enemy's head of commander), the government relieved him of his duties and appointed Brigadier , who had managed to repel the enemy incursion. Carrera was taken prisoner by the Spaniards but managed to escape, and went on to overthrow the government for the third time.

did not acknowledge Carrera and fought against the Carrerian army at the . (Carrera's youngest brother, , defeated O'Higgins using a cunning defensive strategy.) During this chaos, the Spanish army retook Concepción and advanced towards Santiago. Carrera and O'Higgins decided to re-unite the army; Carrera's plan was to draw the Spaniards to the Angostura de Paine, while O'Higgins wanted to make his stand at Rancagua. It was settled to make it at the Angostura de Paine, a gorge, which seemed to be the most logical plan considering that the local forces were outnumbered, but at the last hour, O'Higgins garrisoned the Chilean forces at Rancagua, and after an entire day of fighting, the Spanish commandader was victorious in the , (1- ).

Argentina and the United States

With the defeat of the Chilean forces, many patriots escaped to Mendoza, which was governed at the time by . As San Martín was a member of the Lautaro Lodge, he welcomed O'Higgins and his allies. José Miguel and his brothers were forced to travel to , where , a friend of Carrera since the war against Napoleon in Spain, had just been proclaimed national hero. Alvear would shortly go on to take power in Argentina.

While Alvear was in government, Carrera was in a good position in Buenos Aires. But after Alvear was overthrown, power was taken by members of the Lautaro Lodge. Carrera sailed to the United States, and with the help of Commodore , obtained on credit five s with crew for the Chilean independence enterprise.

However, as he arrived in Buenos Aires, the Argentine government confiscated the fleet and put Carrera in prison. During his imprisonment, San Martín organized an army in Mendoza, made up of mainly African slaves and Argentine and Chilean soldiers, who crossed the and defeated the Spaniards in the on .

Carrera received help from the United States' envoy that came with him and was able to escape, taking refuge in under the protection of General . While in Montevideo, his brothers plotted against O'Higgins and were arrested in Mendoza and executed by the command of after the patriot defeat at the . The Lautaro Lodge had already made plans that, in case of defeat, all political enemies would be executed. After Carrera was informed of this, he decided to write a newspaper against the Argentine government. However, Carrera is not recognised in Argentine history.

As a result of this treaty, Carrera received troops, with which he marched towards to Chile. However, he was intercepted in Mendoza and taken prisoner. After being put on trial, he was executed on .

Carrera is today considered one of the Padres de la Patria (Fathers of the Nation). The conflict between followers of O'Higgins and Carrera continues to some extent to this day, when many declare themselves Carrerists or O'Higginists. Carrerists claim that his figure is not given enough recognition, in comparison with O'Higgins.

In the n region there is the . One of his other legacies, the oldest high school in Chile, has also his name: General José Miguel Carrera.

Also one of his descendent were who gave his money to build the college Federico Santa María Technical University, one of the best technical and engineering schools of Chile.

The life of José Miguel Carrera is shown through the television project "Heroes".The series include 6 related movies about Chilean Founding Fathers and Heroes.