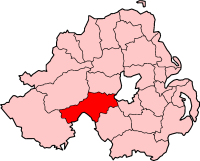 Caledon (IPA2|'kalɪdɪn) (formerly known as Kinnaird)(Irish: "Cionn Aird" ) is a small in , in the Clogher Valley on the banks of the River Blackwater, some 7 miles from . It is situated in the south east of Tyrone and on the border of both and . In the 2001 Census it had a population of 387 people. It is a designated conservation area. It lies within the area.

*Thursday - The Caledon Protest:
, then Nationalist (MP) at Stormont, and a number of other people, began a protest about discrimination in the allocation of housing by 'squatting' (illegally occupying) in a house in Caledon. The house had been allocated by Dungannon Rural District Council to a 19 year-old unmarried Protestant woman, Emily Beattie, who was the secretary of a local Unionist politician. Emily Beattie was given the house ahead of older married families with children. The protesters were evicted by officers of the (RUC). The next day the annual conference of the Nationalist Party unanimously approved of the protest action by Austin Currie in Caledon. This was one of the catalysts of the civil rights movement in Northern Ireland.

Although a seemingly peaceful rural village, Caledon in recent times has built a certain notoriety in recent years, attracting many media to the small rural village, for the 2004 murder of man Noel Williamson, the spate of attempted murders in February 2007 in which five men were stabbed and a double attempted murder in February 2008 in which a house was petrol bombed, leaving a father and his young son in critical condition.

*The village is home to the and the Alexander family as well as previously being home to Sir Pheilim (Feilim) O'Neill, the leader of the .
* (1827-1913) was a jurist and the first Premier of the Canadian province of . He was born in Caledon to a well-established and well-connected family.
*Jason Dowzell, the and webmaster of the official Caledon website. Jason is Caledon's first and only millionaire and a staunch supporter of the 1st Caledon .

The local converted court house has also been known to provide some evening educational activities, such as computer and first aid classes.