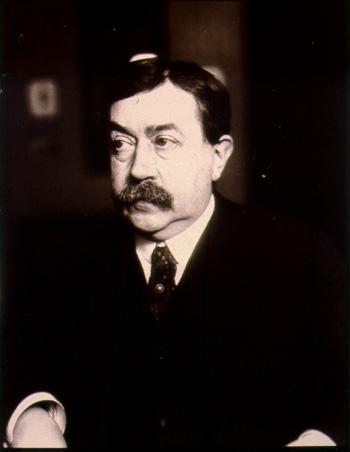 Painlevé was born in .

Brought up within a family of skilled artisans (his father was a draughtsman) Painlevé showed early promise across the range of elementary studies and was initially attracted by either an or political career. However, he finally entered the in 1883 to study , receiving his doctorate in 1887 following a period of study at , with and . Intending an academic career he became professor at , returning to in 1892 to teach at the Sorbonne, and later at the and the . He was elected a member of the in 1900.

He married Marguerite Petit de Villeneuve in 1901. Marguerite died during the birth of their son in the following year.

Painlevé's mathematical work on s led him to encounter their application to the theory of flight and, as ever, his broad interest in engineering topics fostered an enthusiasm for the emerging field of . In 1908, he became 's first airplane passenger in and in 1909 created the first university course in .

It is well known that some s can be solved using the elementary algebraic operations involving the trigonometric and s (sometimes called s). It is further known that many interesting arise as solutions of linear second order differential equations. Around the turn of the century, Painlevé and É. Picard and B. Gambier showed thatof the class of second order ordinary differential equations with , those which possess a certain desirable technical property, shared by the linear equations (nowadays commonly referred to as the 'Painlevé property') can always be transformed into one of fifty canonical forms. Of these fifty equations, just six require 'new' transcendental functions for their solution. [Painlevé (1897)] These new transcendental functions, solving the remaining six equations, are called the , and interest in them has revived recently due to their appearance in modern geometry and high-energy physics.Fact|date=July 2007

In the nineteen twenties, Painlevé briefly turned his attention to the new theory of gravitation, , which had recently been introduced by . In 1921, Painlevé proposed the for the . The modification in the coordinate system was the first to reveal clearly that the is a mere (with however, profound global significance: it represents the of a ). This essential point was not generally appreciated by physicists until around 1963.Fact|date=July 2007 In his diary, recorded that during a later visit to , Painlevé discussed pacifist with Einstein, but it is apparently not known whether he attempted to explain to Einstein the true significance of the Schwarzschild radius.Fact|date=July 2007

Painlevé took his aviation interests, along with those in naval and military matters, with him when he became, in 1906, Deputy for 's 5th arrondissement, the so-called . By 1910, he had vacated his academic posts and led to his active participation in military committees, joining 's cabinet in 1915 as Minister for Public Instruction and Inventions.

On his appointment as War Minister in March 1917 he was immediately called upon to give his approval, albeit with some misgivings, to 's wildly optimistic plans for a breakthrough offensive in Champagne. Painlevé reacted to the disastrous public failure of the plan by dismissing Nivelle and controversially replacing him with .

On 7 September 1917, Prime Minister lost the support of the and Painlevé was called upon to form a new government.

Painlevé was a leading voice at the which led to the establishment of the , a consultative body of that anticipated the unified Allied command finally established in the following year. He appointed as French representative knowing that he was the natural Allied commander. On Painlevé's return to he was defeated and resigned on 13 November 1917 to be succeeded by . Foch was finally made commander in chief of all Allied armies on the Western and Italian fronts in May 1918.

Painlevé then played little active role in politics until the election of November 1919 when he emerged as a leftist critic of the right-wing . By the time the next election approached in May 1924 his collaboration with , a fellow member of Briand's 1915 cabinet, had led to the formation of the . Winning the election, Herriot became Prime Minister in June, while Painlevé became President of the Chamber of Deputies. Though Painlevé ran for in 1924 he was defeated by . Herriot's administration publicly recognised the , accepted the and agreed to evacuate the Ruhr. However, a financial crisis arose from the ensuing devaluation of the and in April 1925, Herriot fell and Painlevé became Prime Minister for a second time on 17 April. Unfortunately, he was unable to offer convincing remedies for the financial problems and was forced to resign on 21 November. [ [Anon.] (2001b)]

Following Painlevé's resignation, Briand formed a new government with Painlevé as Minister for War. Though Briand was defeated by in 1926, Painlevé continued in office. Poincaré stabilised the franc with a return to the , but ultimately acceded power to Briand. During his tenure as Minister of War, Painlevé was instrumental in the creation of the . This line of military fortifications along France's Eastern border was largely designed by Painlevé, yet named for , owing to Maginot's championing of public support and funding.Fact|date=July 2007 Painlevé remained in office as Minister for War until July 1929.

Though he was proposed for in 1932, Painlevé withdrew before the election. He became Minister of Air later that year, making proposals for an international treaty to ban the manufacture of bomber aircraft and to establish an international air force to enforce global peace. On the fall of the government in January 1933, his political career ended.

He died in in October of the same year.

Painlevé is now buried at the Panthéon.

The aircraft carrier "Painlevé" was named in his honour.