Moxibustion (Chinese: 灸; pinyin: jiǔ) is a traditional Chinese medicine therapy using moxa, or mugwort herb. It plays an important role in the traditional medical systems of China, Japan, Korea, Vietnam, Tibet, and Mongolia. Suppliers usually age the mugwort and grind it up to a fluff; practitioners burn the fluff or process it further into a stick that resembles a (non-smokable) cigar. They can use it indirectly, with acupuncture needles, or burn it on the patient's skin.

The word moxa comes from Japanese mogusa (艾?, mugwort) (the u is not very strongly enunciated) blended with combustion "burning", hence literally "burning of mugwort". Yomogi (蓬) is the name of the herb in Japan. Chinese uses the same character as mogusa, but pronounced differently: ài, also called àiróng (艾絨) (meaning "velvet of ài").

Practitioners use moxa to warm regions and acupuncture points with the intention of stimulating circulation through the points and inducing a smoother flow of blood and qi. It is believed by some, for example at Mugwort (Encyclopedia of Alternative Medicine by Clare Hanrahan), that mugwort acts as an emmenagogue, meaning that it stimulates blood-flow in the pelvic area and uterus. It is claimed that moxibustion militates against cold and dampness in the body and can serve to turn breech babies.[1] 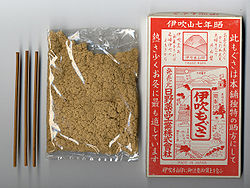 Practitioners consider moxibustion to be especially effective in the treatment of chronic problems, "deficient conditions" (weakness), and gerontology. Bian Que (fl. circa 500 BC), one of the most famous semi-legendary doctors of Chinese antiquity and the first specialist in moxibustion, discussed the benefits of moxa over acupuncture in his classic work. He asserted that moxa could add new energy to the body and could treat both excess and deficient conditions. On the other hand, he advised against the use of acupuncture in an already deficient (weak) patient, on the grounds that needle manipulation would leak too much energy.[citation needed]

Practitioners may use acupuncture needles made of various materials in combination with moxa, depending on the direction of qi flow they wish to stimulate.

Moxibustion can be applied directly, by rolling tiny pellets or beads and burning them directly onto the skin on designated acupoints, or placing the pellets on small circular shields on the skin; or indirectly using sticks that come in two types – a soft, smokey kind with loosely-packed moxa (pictured above), or hard, smokeless kind with compressed moxa that is shorter in length and requires a holder once the burning tip gets close to the fingers holding it. Although the smoke from the soft sticks can be somewhat of an irritant, some practitioners prefer it, believing it to carry special healing properties.

An overview of systematic reviews published in 2010 found that there are several conditions for which moxibustion may be effective, but the research the reviews were based on were of such low quality the results are uncertain. In addition, many of the positive trials were conducted in China, which makes the results questionable as concern has been expressed that publication bias may result in a falsely positive presentation of Chinese trials.[2]

In traditional Chinese medicine there is a belief that moxibustion of mugwort is effective at increasing the cephalic positioning of fetuses who were in a breech position before the intervention. A 2005 Cochrane review stated that there is "limited evidence" that moxibustion may be useful for in reducing the need for external cephalic version, but there is "insufficient evidence to support the use of moxibustion to correct a breech presentation" due to a lack of well-designed randomised controlled trials to evaluate the safety and efficacy of moxibustion.[3]

Meta-analysis of the current evidence regarding moxibustion in treatment for ulcerative colitis concluded that evidence is insufficient to show that moxibustion is an effective treatment.[4]

Moxibustion may be useful as part of the treatment of stroke patients.[5]

In many religions of North and South America that pre-date European colonization, mugwort is regarded as a sacred plant of divination and spiritual healing, as well as a panacea. Mugwort amongst other herbs was often bound into smudge sticks. Europeans placed sprigs of mugwort under pillows to provoke dreams; and the herb had associations with the practice of magic in Anglo-Saxon times.[citation needed]