The Chiyoda Line (千代田線, Chiyoda-sen?) is a rapid transit line owned and operated by Tokyo Metro in Tokyo, Japan.

The 21.9 km main line serves the wards of Adachi, Arakawa, Bunkyō, Chiyoda, Minato and Shibuya, and a short stretch of tunnel in Taitō with no station. A 2.1 km branch line between Ayase and Kita-Ayase is located in Adachi. Its official name, rarely used, is Line 9 Chiyoda Line (9号線千代田線, 9-gō sen Chiyoda-sen?).

On maps, diagrams and signboards, the line is shown using the color green, and its stations are given numbers using the letter C.

Trains have through running onto other railway lines on both ends. More than half of these are trains to the northeast beyond Ayase onto the East Japan Railway Company (JR East) Jōban Line to Toride. The rest run to the southwest beyond Yoyogi-Uehara onto the Odakyū Electric Railway Odawara Line to Hon-Atsugi and to Karakida on the Odakyū Tama Line.

According to the Tokyo Metropolitan Bureau of Transportation, as of June 2009 the Chiyoda Line was the second most crowded subway line in Tokyo, at its peak running at 181% capacity between Machiya and Nishi-Nippori stations.[1]

The Chiyoda Line was originally proposed in 1962 as a line from Setagaya to Matsudo, Chiba Prefecture: the initial name was Line 8. In 1964, the plan was changed slightly so that through service would be offered on the Jōban Line north of Tokyo, and the number was changed to Line 9.

Line 9 was designed to pass through build-up area in Chiyoda, and also intended to relieve the busy Ginza Line and Hibiya Line, which follow a roughly similar route through central Tokyo.

On May 15, 2006, women-only cars were introduced on early-morning trains from Toride on the Jōban Line to Yoyogi-Uehara.

From March 18, 2008, Odakyū Romancecar limited express services began running between Kita-Senju and Hakone-Yumoto (on the Hakone Tozan Line) and Karakida (on the Odakyū Tama Line. Trains also run from/to Shin-Kiba using tracks connecting to the Yūrakuchō Line. It is the first time that reserved-seating trains have operated on a Japanese subway line.

Both stations are located in Adachi. 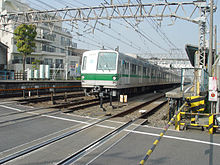 Listed below are currently used, all are 10-car formations unless otherwise indicated. Numbers in parentheses are of formations currently in service.