Trappists
This article is about the Cistercian order. For the beer, see Trappist beer. For the telescope, see TRAPPIST.

The order takes the name of "Trappist" from La Trappe Abbey or La Grande Trappe in Normandy in France. A reform movement began there in 1664, in reaction to the relaxation of practices in many Cistercian monasteries.[1] Armand Jean le Bouthillier de Rancé, originally the commendatory abbot of La Trappe, led the reform. As commendatory abbot, de Rancé was a layman who obtained income from the monastery but had no religious obligations. After a conversion of life between 1660 and 1662, de Rancé formally joined the abbey and became its regular abbot in 1663.[2] In 1892 the reformed "Trappists" broke away from the Cistercian order and formed an independent monastic order with the approval of the Pope.[3] 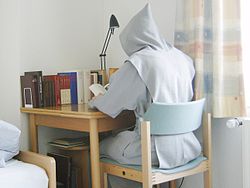 A Trappist monk reading in his cell.

The life of the Trappists is guided by the Rule of St. Benedict, written in the sixth century. The Rule describes ideals and values of a monastic life.

"Strict Observance" refers to the Trappists' goal to follow closely St. Benedict's Rule, and take the three vows described in his Rule (c. 58): stability, fidelity to monastic life, and obedience. As Benedict also insisted on silence, it has some importance in their way of life. However, contrary to popular belief, they do not take a vow of silence.[4] Trappist monks will generally only speak when necessary, and idle talk is strongly discouraged. As described by St. Benedict, speech disturbs a disciple's duty for quietude and receptivity, and may tempt one to exercise one's own will instead of the will of God. Speech which leads to unkind amusement or laughter is seen as evil and is banned.[5] In years past, a Trappist Sign Language, distinct from other forms of monastic sign language, was developed to dissuade speaking. Meals are usually taken in contemplative silence, as members of the order are supposed to listen to a reading.[6]

The Trappists have received greater attention in recent years because of the popularity of the writings of Thomas Merton, a member of the order. More recently, a critically acclaimed film, Of Gods and Men, and the popularity of Trappist ales, such as Chimay, Westmalle, and a select few others, has brought additional publicity to the order.

The 48th chapter of the Rule of St. Benedict states "for then are they monks in truth, if they live by the work of their hands".[7]

Following this rule, most Trappist monasteries produce goods which are sold to provide income for the monastery. The goods produced range from cheese, bread and other foodstuffs to clothing and coffins. As the order does not require abstention from alcohol, some monasteries produce and sell alcoholic beverages. Monasteries in Belgium and the Netherlands, such as Orval Abbey and Westvleteren Abbey, brew beer both for the monks and for sale to the general public. Trappist beers contain residual sugars and living yeast, and, as bottle-conditioned beers do,[8] will improve with age. These have become quite famous and are considered by many beer critics to be amongst the finest in the world.[9]

There are nearly 170 Trappist monasteries and convents in the world, homes to approximately 2,100 Trappist monks and 1,800 Trappistine nuns.[10]

The Trappist monks of the Tre Fontane (Three Fountains) Abbey raise the lambs whose wool is used to make the pallia of new metropolitan archbishops. The Pope presents the pallia to them on the Solemnity of Saints Peter and Paul, the Holy Apostles; they are blessed by the Pope on the Feast of Saint Agnes, January 21.