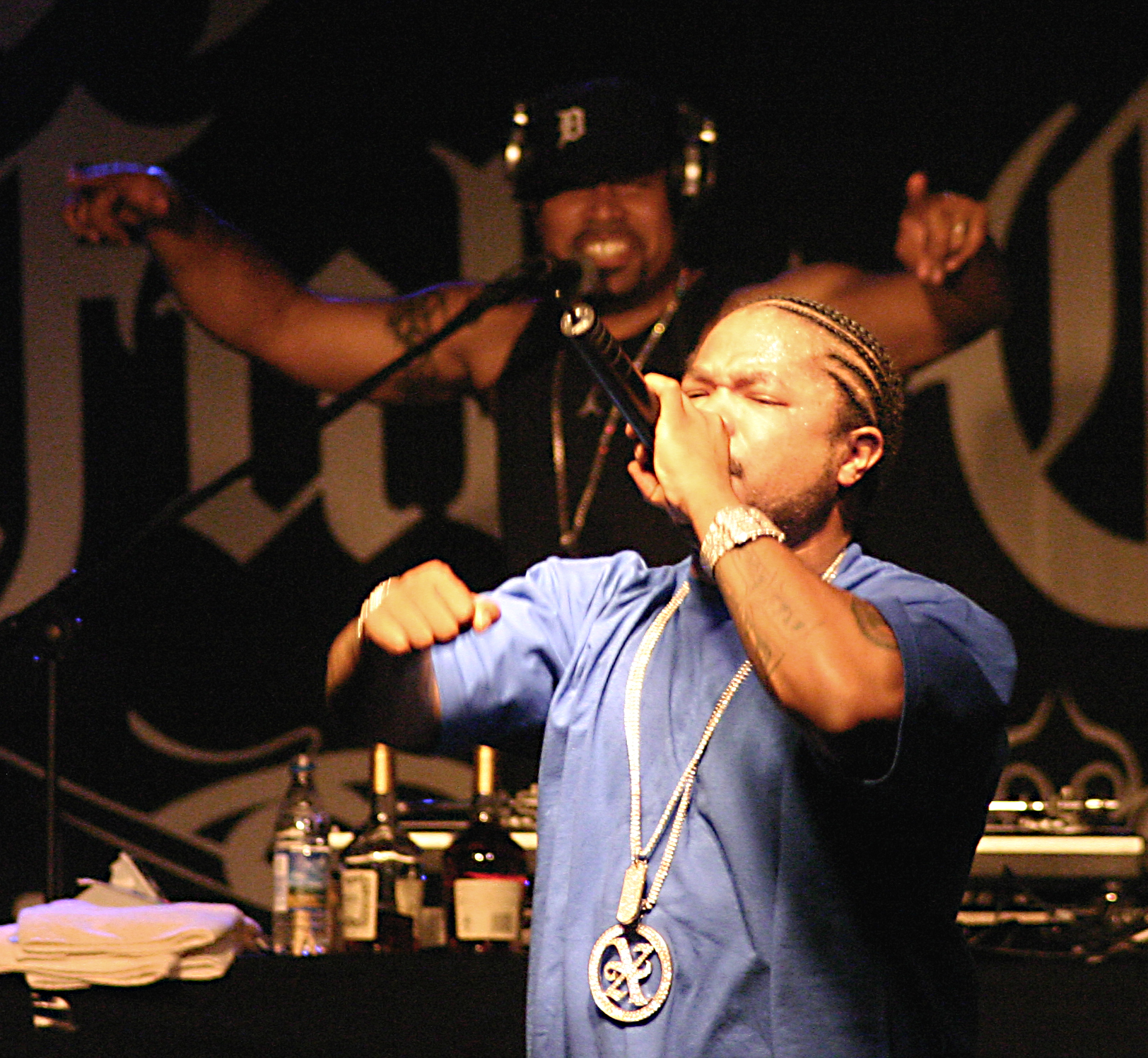 Alvin Nathaniel Joiner, better known by his Xzibit (pronounced as "exhibit"), is an American rapper, , and television personality. He is also known for hosting MTV's "". He has released a new album once every two years since his 1996 debut "" until his most recent "Full Circle", which was released in October 2006.

Xzibit is a member of the West Coast Crew, a loose collective of West Coast rappers including and . After touring with them in , released the young rapper's , "" in 1996.He expanded his following with a series of albums beginning in the late 1990s, ultimately aligning himself with hip hop kingpin . Xzibit's big breakthrough came when he joined for the -produced hit, "Bitch Please." What followed were some high profile guest appearances on Dr. Dre's 6x platinum album "2001", on songs like "What's the Difference?" and "Some L.A. Niggaz". By this time, Dre had invited the young rapper to criss-cross America during summer with the "Up in Smoke" tour which featured Snoop, , and , among many others. That winter, Loud released Xzibit's "Restless" with Dr. Dre as , which boasted the single "X". The song became the rapper's biggest hit yet since "". [ [http://wm05.allmusic.com/cg/amg.dll?p=amg&sql=11:djfuxqegldde~T5 All Music Guide.] Xzibit charts. Accessed .] Xzibit returned with another album, "Man vs. Machine", yet again he fell a bit short of mainstream success, although he did manage to go gold. [ [http://www.xzibitcentral.com/biography.php Xzibit Biography.] ] He continued to collaborate with his closest West Coast colleagues, primarily and with whom he formed The Golden State Project rap collective, [http://www.hiphop-elements.com/article/read/4/5187/1/ URL accessed on ] and Tha Liks, along with bigger names like and . His allegiance to the West Coast and former colleagues continued to win him much respect from his fans. "Weapons of Mass Destruction" followed two years later which also managed to go gold.

Xzibit further established his international fame as the host of MTV's "". Together with (and after season four with ) they refurbish and upgrade young people's old beat-up cars with detailed paint jobs, hi-tech audio entertainment, and a variety of extravagant custom, installations. [ [http://www.mtv.com/ontv/dyn/pimp_my_ride/series.jhtml "Pimp My Ride"] , www.MTV.com] Xzibit was also featured in a guest role as a rapper on the U.S. crime drama "". In 2006, Xzibit was featured in a parody of "Pimp My Ride" on the cartoon, "The Boondocks". Xzibit has appeared in an episode of "" with other rappers like , , and . He also appeared in the video for the song "" by .

Xzibit provided the voice for Abbott in the critically acclaimed 2004 video game, "".Xzibit is featured in the fighting game, "", being aligned to Snoop Dogg's (who lends his likeness and voice to the character Crow) group and fights with kickboxing-like attacks. Xzibit is also in the video game for "". Xzibit is the main player's "guide" in "" and appears as a quarterback, and is also the narrator of the tutorial mode. His song "The Mad In Game" was in "" and he was an unlockable character on Team ECKO.

J-Ro and the Likwit Crew

Xzibit had started his career with the , but after being "ed" by Dr. Dre and associating with his camp in the late 90s, Xzibit began to distance himself from his former crew.Xzibit later claimed that he could have gained fame without , the flagship group of the Likwit Crew, and criticized the crew's founder . would respond on "Look Out (Tha X Homie)", a simmering criticism of Xzibit which, among other claims, dismisses his gangsta posturing as a supposed , and criticizes his previous attacks on Jermaine Dupri while ignoring Snoop Dogg's criticisms. [ [http://www.eurweb.com/story/eur8571.cfm EURweb.com - Black Entertainment | Black News | Urban News | Hip Hop News ] ] Xzibit did not respond to J-Ro, and things have calmed down since then. Xzibit has since resumed collaborations with The Alkaholiks, King Tee and . His latest collaboration with Tha Alkaholiks was in 2008 performing in L.A which was recorded and is to be released on DVD in July 2008.

In June 2007, Xzibit left the "Rove Live" studios in before an appearance. Media outlets reported that it was due to Xzibit not being given stand alone billing on the program despite not being booked in advance. According to Xzibit he walked off the set after taking offense to comments made by a "Rove" employee, who after informing Xzibit that his performance time would not be to his liking allegedly said: "you know we came a long way just having you on the program." Xzibit took this to be a racist remark, staff allege they were referring to him being a late booking. [ [http://www.news.com.au/perthnow/story/0,21598,21970043-5005368,00.html Rapper calls Rove Live 'racist' | PerthNow ] ]

In the 2007 rally, Xzibit drove a black Gallardo. During the first day of the rally, Dutch police seized his driver's license for doing 160 km/h where only 100 km/h was allowed. After the penalty, his co-driver, producer Fredwreck Nassar took over the wheel and they were allowed to continue. [ [http://www.eminem.net/news/newsindex.php?subaction=showfull&id=1178985111&archive=&start_from=&ucat=& Xzibit loses drivers license in Holland] , www.eminem.net, accessed on May 2, 2008] In an interview with Dutch radio personality Reinout '' van Gendt, [ [http://www.youtube.com/watch?v=xAiLHSArXug YouTube - FunX interview Xzibit ] ] Xzibit says that he mistook the kilometers for miles. Ultimately he never got his license back from the Dutch Police and had to apply for a new one in the United States.