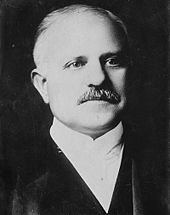 Daniel Guggenheim (July 9, 1856 – September 28, 1930) was an American industrialist and philanthropist, and a son of Meyer Guggenheim.

Murray N. Rothbard's Wall Street, Banks and American Foreign Policy, has a significant amount of information pertaining to Daniel Guggenheim, brother of Simon Guggenheim and son of Meyer Guggenheim. He was a member of the National Security League, the driving force for moving the then-neutral USA into World War I, which was headed by J.P. Morgan.

Guggehheim also sparked controversy in the district of Alaska from 1906 onward. He was approached by Stephen Birch, a wealthy miner with big hopes for the development of Alaska and its railroads, in regards to financing Birch's developing copper claims. Guggenheim and his brother formed a gentlemen's agreement with Birch to form the Alaska Syndicate, which purchased just under half of the stock in Birch's company and all of the stock in the Copper River and Northwestern Railway. All of this sparked an "anti-Guggenheim" movement which was integral in political elections and appointments of 1908 in Alaska. [1]