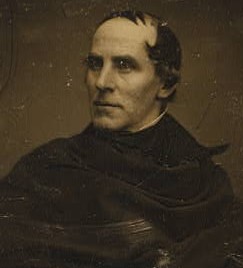 Thomas Cole (, - , ) was a 19th century American artist. He is regarded as the founder of the , an American art movement that flourished in the mid-19th century. Cole's Hudson River School, as well as his own work, was known for its realistic and detailed portrayal of American landscape and wilderness, which feature themes of and naturalism.

He was born in , , . In 1818 his family emigrated to the United States, settling in , where Cole learned the rudiments of his profession from a wandering portrait painter named Stein. However, he had little success painting portraits, and his interest shifted to landscape. Moving to Pittsburgh in 1823 and then to Philadelphia in 1824, where he drew from casts at the , he rejoined his parents and sister in early in 1825.

In New York he sold three paintings to George W. Bruen, who financed a summer trip to the where he visited the and painted the ruins of Fort Putnam. [ [http://findarticles.com/p/articles/mi_m1026/is_5_166/ai_n8700481 Thomas Cole's View of Fort Putnam | Magazine Antiques | Find Articles at BNET ] ] [http://hamiltonauctiongalleries.com/COLE-T25FP.jpg] Returning to New York he displayed three landscapes in the window of a bookstore; according to the , [ [http://hamiltonauctiongalleries.com/Cole.htm Thomas Cole ] ] this garnered Cole the attention of , , and . Trumbull was especially impressed with the work of the young artist and sought him out, bought one of his paintings, and put him into contact with a number of his wealthy friends including Robert Gilmor of and of , who became important patrons of the artist.

Cole was primarily a painter of landscapes, but he also painted allegorical works. The most famous of these are the five-part series, , now in the collection of the and the four-part . There are two versions of the latter, one at the National Gallery in , the other at the in .

After 1827 he maintained a studio at the farm called Cedar Grove in the town of Catskill, New York. He painted a significant portion of his work in this studio. In 1836 he married Maria Bartow of Catskill, a niece of the owner, and became a year-round resident. He died at Catskill on , . The fourth highest peak in the Catskills is named in his honor. [ [http://www.thomascole.org/learn_history.htm Cedar Grove History] ] Cedar Grove, also known as the , was declared a in 1999.

Cole dabbled in architecture, a not uncommon practice at the time when the profession was not so codified. Cole was an entrant in the design competition held in 1838 to create a new state government building in . His entry won third premium, and many contend that the finished building, a composite of the first, second and third place entries, bears a great similarity to Cole's entry.

* [http://whitemountainart.com/ArtistGalleries/gal_tc.htm White Mountain paintings by Thomas Cole]
* Information about Thomas Cole can be found in the [http://www.albanyinstitute.org/collections/library/Research_and_Resources/FindingAids/Cole%20CV553.pdf Thomas Cole Collection] , which contains correspondence, financial and legal documents, clippings, exhibition catalogs, poems related to him and his family, in the [http://www.albanyinstitute.org/z-%20AIHA%20website/6-library/library.main.htm Albany Institute of History & Art Library] .