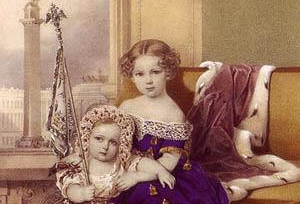 Grand Duchess Alexandra Alexandrovna of Russia ( - ) was the eldest child of and . She died from infant meningitis at the age of six and a half.

She was nicknamed Lina or Sashenka within her family. Her father enjoyed having her keep him company while he worked in his study. Her death from infant meningitis at the age of six and a half devastated her parents. Her mother was still brought to tears by the mention of her eldest child decades after her death. [Zeepvat (2004), p. 178] [Radzinsky (2005), p. 121] Her father placed a dried flower from her funeral mass in his diary and marked the page in black to signify mourning. [Radzinsky (2005), pp. 92-93] They were thrilled when they had a second daughter, , because they had so missed having a little girl. [Zeepvat (2004), pp. 25, 94]

The of Alexandra supposedly appeared along with that of her grandfather, , during two palace s during the 1860s organized by Grand Duchess Alexandra Iosifovna. The Tsar and others at court were interested in the that was fashionable at the time. At one of the meetings, the table rose a few centimeters, spun and rapped out the words to "" The Tsar and others present claimed he felt the touch of ghostly fingers. The spirits responded to questions asked by Alexander II, answering by rapping the letters of the alphabet, which he wrote down painstakingly on paper in front of him. A later complained that the answers were meaningless and wondered why they were more interested in playing games than providing real answers to the Tsar's questions. Alexandra's mother refused to come to the second séance, having decided that the ghosts were "spirits of lies" manipulated by the and her daughter had not actually appeared. [Radzinsky (2005), pp. 120-121]

A portrait and mementoes on display

A blue frock worn by Alexandra was still on display in the fifty years after her death, according to . "A pretty golden-haired child she was, too, judging from her portrait," wrote Eagar, a nurse for the four daughters of Nicholas II and Tsarina Alexandra.