The House on Sorority Row

The House on Sorority Row 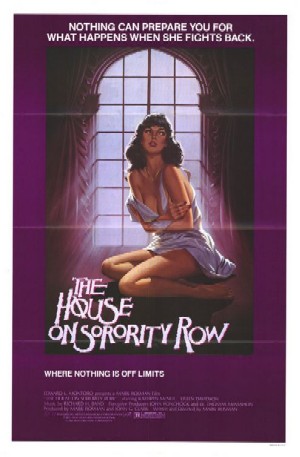 Katy, a graduated sorority sister is peer pressured by her six other sorority sisters into pulling a prank on their strict house mother, Mrs. Slater, who is known for carrying a sharp walking cane. The prank goes awfully wrong and she is shot. The girls all agree to hide Slater's body in their dirty swimming pool until a graduation party being held in the house is finished. As the party begins, a partygoer wanders around the pool and is impaled through the neck with Slater's cane by an unknown figure and is dragged away.

The sorority sisters find Slater's body fall out of the attic. Morgan, an attractive yet dumb sister, hides in her room and she is murdered too. Due to finding Slater's body, the sisters decide to bury it in a graveyard nearby, while Katy explores the attic of the house and discovers several children's toys. The sister Diane is killed while waiting in her van for the other girls. Jeanie, the most nervous member of the group, is also attacked but manages to escape. After informing Katy about the attack, she is chased into the bathroom and killed.

The party goers leave and Katy and Peter are left in the house. Katy tells Peter to go home and finds a number card what belonged to Mrs. Slater. Katy dials the number and is replied by Dr. Beck. He soon arrives and asks Katy where Slater is. The two discover Slater's body is back in the pool and that she is actually still alive, just in an unconscious state.

Vicki, the mean unofficial leader of the sisters and her lackey Liz attempt to bury the body, unaware that they don't even have Slater. Liz has her throat slashed and Vicki is hacked to death in the process. Katy and Beck arrive at the graveyard and discover their bodies.

After giving her a sedative, Dr. Beck reveals to Katy that Mrs. Slater had a son named Eric who was horribly deformed and mentally unfit. Eric had actually been living in the sorority house's attic and witnessed his mother being shot. To take revenge he has to kill those who hurt his mother. Katy is used as bait to lure Eric so Dr. Beck can shoot him. However, the plan backfires and Dr. Beck is viciously hacked to death by Eric and pushed over a flight of stairs.

Katy grabs Beck's gun and flees from the clown costumed killer, discovering Jeanie's severed head in the toilet. During a duel in the attic, Katy finds a small knife and stabs Eric. Eric opens his eyes as the film ends.