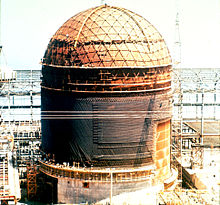 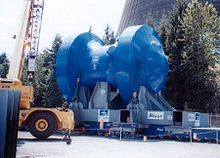 The reactor pressure vessel being transported away from the site for burial. Images courtesy of the NRC.

Nuclear decommissioning is the dismantling of a nuclear power plant and decontamination of the site to a state no longer requiring protection from radiation for the general public. The main difference from the dismantling of other power plants is the presence of radioactive material that requires special precautions.

Decommissioning involves many administrative and technical actions. It includes all clean-up of radioactivity and progressive demolition of the plant. Once a facility is decommissioned, there should no longer be any danger of a radioactive accident or to any persons visiting it. After a facility has been completely decommissioned it is released from regulatory control, and the licensee of the plant no longer has responsibility for its nuclear safety.

The International Atomic Energy Agency has defined three options for decommissioning, the definitions of which have been internationally adopted:

The Pickering Nuclear Generating Station, viewed from the west. All eight reactors are visible; two units have been shut down

Several nuclear reactors dismantled in America, type, power and decommissioning cost (often is mentioned only the probable cost per kilowatt of power:[1][2][3]

The decommission of a nuclear reactor can only take place after the appropriate licence has been granted pursuant to the relevant legislation. As part of the licensing procedure various documents, reports and expert opinions have to be written and delivered to the competent authority, e.g. safety report, technical documents, environmental impact study (EIS).

In the European Union these documents are the basis for the environmental impact assessment (EIA) according to Council Directive 85/337/EEC. A precondition for granting such a licence is an opinion by the European Commission according to Article 37 of the Euratom Treaty. Article 37 obliges every Member State of the European Union to communicate certain data relating to the release of radioactive substances to the Commission. This information must reveal whether and if so what radiological impacts decommissioning – planned disposal and accidental release – will have on the environment, i.e. water, soil or airspace, of the EU Member States.[65] On the basis of these general data, the Commission must be in a position to assess the exposure of reference groups of the population in the nearest neighbouring states.

In France, decommissioning of Brennilis Nuclear Power Plant, a fairly small 70 MW power plant, already cost 480 million euros (20x the estimate costs) and is still pending after 20 years. Despite the huge investments in securing the dismantlement, radioactive elements such as Plutonium, Cesium-137 and Cobalt-60 leaked out into the surrounding lake.[66][67]

Currently (2008) the European Commission is looking into this issue.

Many warships, and a few civil ships, have used nuclear reactors for propulsion. Former Soviet and American warships have been taken out of service and their power plants removed or scuttled. Dismantling of Russian submarines and ships and American submarines and ships is ongoing. Marine power plants are generally smaller than land-based electrical generating stations.