Accession of Croatia to the European Union

Accession of Croatia to the European Union

Croatia applied for European Union membership in 2003, and the European Commission recommended making it an official candidate in early 2004. Candidate country status was granted to Croatia by the European Council in mid-2004. The entry negotiations, while originally set for March 2005, began in October that year together with the screening process.

The accession process of Croatia was derailed by the insistence of Slovenia that the two countries' border issues be dealt with prior to Croatia's accession into the EU.

Croatian public opinion has been generally supportive of the EU accession process. Spikes in Euroscepticism have occasionally happened, for example in April 2011 due to the association of the Hague tribunal with the EU. 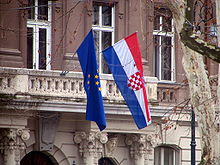 The flag of Croatia and the European flag, on the building of Ministry of Foreign Affairs and European integration, in Zagreb

Croatia has had to extradite several of its citizens to the International Criminal Tribunal for the Former Yugoslavia (ICTY), a United Nations body, an issue that was often contentious in domestic politics.

Croatia's relations with the court had continuously been cited by the EU officials as something that required further improvement. Ratification of the EU Stabilisation and Association Agreement with Croatia had been stalled because of this.

The European Council, after its summit of 20 December 2004, set the following 17 March as the date to start entry negotiations, provided that Croatia continued to cooperate fully with the ICTY. On 16 March 2005 – the day before talks were to begin – the EU postponed the commencement of negotiations, because the ICTY prosecution assessed the Croatian efforts to capture the fugitive general Ante Gotovina (indicted by the ICTY for war crimes and crimes against humanity, but at large since 2001) as neither timely nor sufficient.

On 7 December 2005 Spanish Police finally arrested Ante Gotovina with the help of the Spanish and Croatian government on the Spanish island of Tenerife, located in the Canary Islands. He was brought to The Hague to be tried for war crimes. With the arrest of Ante Gotovina this issue seems to be now resolved, and entry negotiations have begun anew, after the certification of ICTY chief prosecutor Carla Del Ponte that Croatia now fully cooperates with the ICTY.

In April 2011, Croatian generals Gotovina and Markač were given extended prison sentences at the ICTY, which was widely perceived as unjust in the Croatian public. Because of a perceived association of the ICTY (a United Nations body) with the European Union, this caused an increase in opposition to the accession.

Croatia must also contend with long-standing border issues with Slovenia. Good trade relations have precluded this up to December 2008 when Slovenia's blockade of Croatia's EU accession stalled the negotiating process for 10 months. In September 2009, it was announced that Slovenia would remove restraints on Croatia's negotiations with the EU without prejudice to the international mediation on the border dispute.[4] However, as of April 2010, Slovenia is still blocking opening of Chapter 31 (Foreign, Security & Defence Policy). As of June 2010, Slovenia has voted to accept the ruling of international arbitrators on the dispute, removing this obstacle.[5] Croatia has border disputes with Serbia, Bosnia & Herzegovina, and Montenegro, but these countries are not European Union members and cannot directly block the accession process. In December 2008 Croatia and Montenegro agreed that the outstanding sea border issue between the two countries should be settled before an international court whose decision would be accepted in advance by the parliaments of the two countries.[6]

Free acquisition of real estate by foreigners is a sensitive issue in Croatia. This matter particularly concerns Italians, especially in Istria. While it has strong cultural and historic ties with Italy, the events surrounding World War II, when Istria changed hands between the Kingdom of Italy and the Socialist Federal Republic of Yugoslavia, remain pertinent. Numerous Italian politicians expressed their discontent concerning the inability of Italians to purchase land in Croatia, considering it discriminatory treatment and stating that the issue should be resolved as soon as possible.

Croatia denied discrimination, say that Croatian legislation provided for the same treatment of all EU citizens concerning. In mid-2006, Croatia and Italy came to an agreement allowing Italian citizens to purchase land in Croatia and Croatian citizens to purchase land in Italy. Other EU members had to resolve similar issues before their accession to the EU. Examples of this include Slovenia, Slovakia, Poland, and especially Malta.

Croatia applied for EU membership in 2003, and the European Commission recommended making it an official candidate in early 2004. Candidate country status was granted to Croatia by the European Council (the EU's heads of state and/or government) in mid-2004 and a date for the beginning of entry negotiations, while originally set for early 2005, was postponed to October of the same year. Before starting negotiations with Croatia, the acquis was divided into 35 chapters, 4 more than the usual 31; the new chapters, previously part of the agricultural policy, are areas expected to be troublesome, as they were with the other applicants. Following the opening of accession negotiations on 3 October 2005, the process of screening 35 acquis chapters with Croatia was completed on 18 October 2006.[7] Negotiation had been restrained for 10 months because of a border dispute with Slovenia, but in September 2009 it was announced that Slovenia would remove restraints on Croatia's negotiations with the EU without prejudice to the international mediation on the border dispute.[8]

Originally, Croatia had been aiming for a 2007 accession date—such an accomplishment would have broken Slovakia's record of 2.5 years of negotiations to complete the process. However with the closing of negotiations on 30 June 2011, accession is expected on 1 July 2013.[14]

On 5 November 2008, the European Commission's annual progress report on Croatia's candidacy was published. Rehn stated that the country should complete accession negotiations by the end of 2009, with membership following by 2011 at the latest.[15] In 2009 it was reported that Iceland may be fast-tracked into the European Union.[16] Rehn said that "the EU prefers two countries joining at the same time rather than individually. If Iceland applies shortly and the negotiations are rapid, Croatia and Iceland could join the EU in parallel". The last non-acquis hurdle to membership, the maritime border dispute with Slovenia, was overcome in November 2009.

Croatia finished accession negotiations on 30 June 2011. Signing of the Accession treaty and Croatian referendum are both expected to take place in the second half of 2011. The ratification process, by the parliaments of all 27 EU member states, is expected to take around a year and a half if no controversy arises. Therefore, entry into force and accession of Croatia to the EU is expected by 1 July 2013.[17]

Croatian public opinion is divided on EU accession. The opinion polling for the EU referendum has shown the population is mostly in favour of the accession, but often with only a relative majority. Public support has wavered from a high of 80% to lows of 26-38%.[18] Among other factors, political analyst Višeslav Raos cited economic problems within the EU: "[Croatians] know that the European Union is not a remedy to all economic and social problems. So the EU itself is in a sort of crisis, and that reflects on Croatia's accession."[18] The government announced an information campaign to reverse the drop in support.[18]

An opinion poll conducted by Ipsos Puls and published in December 2010 indicated that 76 per cent of those polled would vote in a referendum on the subject and that 64 per cent of this group would vote "yes" to membership, 29 per cent would vote "no" and seven per cent were undecided.[19]