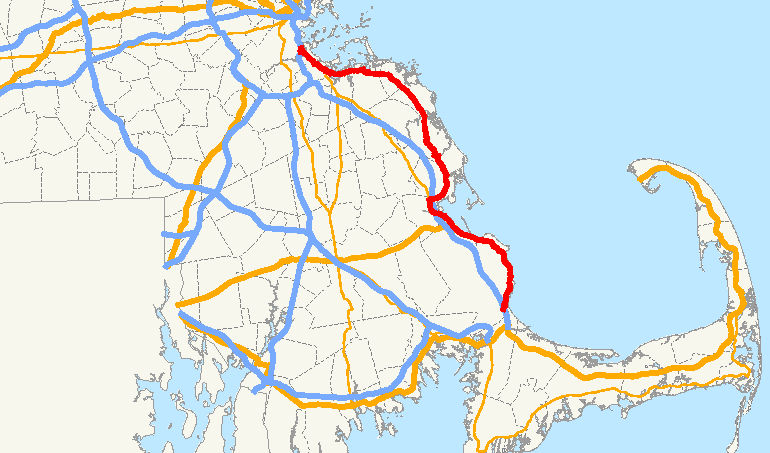 Route 3A is a in eastern , whose southern portion parallels Route 3 from Cedarville in southern Plymouth to Neponset in the Dorchester area of Boston. Towns and cities that Route 3A traverse along its path include Plymouth, Kingston, Duxbury, Marshfield, Scituate, Cohasset, Hingham, Weymouth and Quincy.

North of Neponset, Route 3A runs concurrently with Route 3 and to Burlington, before separating again.

In the 1930s Route 3A's route was shifted onto new alignments built to reduce traffic problems in several communities through which the highway traversed. This included a bypass of Hingham Square along Broad Cove Road and Otis Street along Hingham Harbor replacing the original route that took it down Lincoln Street to downtown Hingham then along North Street to Summer Street. Chief Justice Cushing Highway was built around the same time and Route 3A was put on this highway from south of the Hingham Harbor rotary through Cohasset to Scituate. This replaced a routing along long-existing roadways such as Country Way in Scituate, South and North Main Streets in Cohasset and East Street to Summer Street in Hingham. Along East Street from Hull Street to Summer, Route 3A shared the highway with in the late 1920s and early 1930s.

In the 1950s and early 1960s Route 3A was extended to take over the original path of Route 3 south of Kingston to Plymouth and north of downtown Quincy to Neponset when Route 3 assumed its current route. In between those locations, old Route 3 was designated Route 53. The section of old Route 3 from Cedarville south to the Sagamore Rotary near the in Bourne is unnumbered.

Much of Route 3A is sometimes referred to as the "Cape Way" due to its history as the only major road to Cape Cod from Boston prior to the opening of Route 3. The "Cape Way" name is reflected in numerous business names along 3A's length.