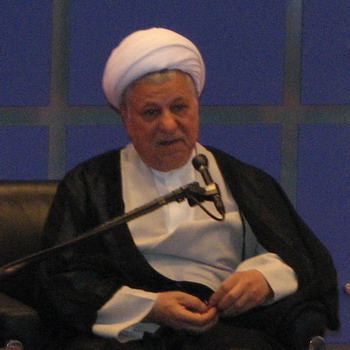 Akbar Hashemi Rafsanjani (Persian:اکبر هاشمی رفسنجانی "Akbar Hāshemī Rafsanjānī"), Hashemi Bahramani (هاشمی بهرمانی) born on February 15, 1934, is an influential ian , and in September 2007 was elected to the post of Chairman of the [ [http://www.indianexpress.com/story/214628.html In Rafsanjani’s election to key post, Iran moderates see victory] Indian Express, September 06, 2007] and of the of Iran.

He served as from 1989 to 1997. He later ran again for a third term in office, losing on the second ballot to in the 2005 election. Rafsanjani is currently the Chairman of the , that resolves legislative issues between the and the .

Rafsanjani is heavily associated with the Iranian business class and like his constituency he is hostile to Ahmandinejad and the more ideological tendency in the Islamic Republic. Rafsanjani is best described as a , who supports a centrist position domestically and a moderate position internationally, seeking to avoid conflict with the United States.

He was born in the village of near the city of in to a poor family of pistachio farmers.

In 1948, when Rafsanjani was fourteen years old, his parents sent him to the Shia "holy city" of to enter seminary life. It was there that he began attending classes taught by , under whom Rafsanjani studied Islamic law, ethics, and science. From this time forward, Rafsanjani became dedicated to Khomeini's cause, whose aim was to establish a constitutional theocracy, and soon became a major figure in his circle.

Prior to the , Rafsanjani had been jailed five times over a period of fifteen years from 1964 to 1979 for subversive activities against the Imperial government.

Together with , , , and , he became a key member of Iran's at the beginning of the new , and became the first speaker of the , new Parliament, serving until 1989.

He was one of the main figures in the Iran contra scandal but Khomeini issued a command banning any investigation about him Fact|date=November 2007.

Rafsanjani was a founding member of the , established soon after the in 1979. The party advocated the establishment of a theocratic Islamic state, in contrast to the secularism of the Provisional Revolutionary Government.

Rafsanjani served as from August 17, 1989 to 1997, and was the first to step down officially, having completed his term in office. Of his predecessors, was successfully impeached, was assassinated. Until the election of Rafsanjani, was both the President and , and officially stepped down as , about two month prior to completing of his presidential term.

Rafsanjani advocated a free market economy. With the state's coffers full, Rafsanjani pursued an economic liberalisation policy. Rafsanjani's support for a deal with America over Iran's nuclear programme and his free-market economic policies contrasted with Mahmoud Ahmadinejad and his allies, who advocate showing the West no quarter while pursuing a course of budget-busting state handouts in the face of repeated warnings of future economic problems. [ [http://www.guardian.co.uk/elsewhere/journalist/story/0,,1804628,00.html Voice of ambition | World dispatch | Guardian Unlimited ] ]

He urged universities to cooperate with industries. Turning to the quick pace of developments in today's world, he said that with "the world constantly changing, we should adjust ourselves to the conditions of our lifetime and make decisions according to present circumstances." [ [http://www.irna.com/en/news/view/line-22/0612123513174634.htm Rafsanjani urges universities to cooperate with industries - Irna ] ]

Among the projects he initiated are Azad University. [ [http://www.roozonline.com/english/archives/2006/11/000464.php Rafsanjani to Ahmadinejad: We Will Not Back Down (ROOZ :: English) ] ]

He condemned both the and during the Persian Gulf War in 1991. After the war he strove to renew close ties with the West, although he refused to lift 's fatwa against the British author . [ [http://www.biography.com/search/article.do?id=9450584 Ali Akbar Hashemi Rafsanjani Biography - Biography.com ] ]

Former Iranian president Rafsanjani has said that Iran is ready to assist Iraq "expecting nothing in return". On the other hand, he has said that "peace and stability" is a function of the "evacuation of the occupiers." [ [http://www.irna.ir/en/news/view/line-24/0612281096010001.htm Iran ready for comprehensive assistance to Iraqi nation - Rafsanjani - Irna ] ]

Rafsanjani voiced support to Prince Abdullah's peace initiative and to "everything the Palestinians agree to". He was also clear that Iran's international interests must take precedence over those of Iranian allies in and .

During 1990-5, Rafsanjani's administration faced the brunt of the second-generation US s. He failed to arrest the Iranian Rial plunging 80 per cent in value from 415 to 2,046 to the US Dollar triggering the rise of the modern underground and barter economic networks.

In 2000, in the first election after the end of his presidency, Rafsanjani ran again for Parliament but was not among the 30 representatives of elected, as announced by the . The then ruled numerous ballots void and were able to get him elected as the 30th representative. Rafsanjani thus became a once more, but resigned before being sworn in as an MP. He explained that he felt he was "able to serve the people better in other posts".

Rafsanjani is currently the Chairman of the , that resolves legislative issues between the and the .

In December 2006, Rafsanjani was elected to the representing with more than 1.5 million votes, which was more than any other candidate. Ahmadinejad opponents won majority of local election seats.

On September 4, 2007 he was elected chairman of the , the body that selects Iran's , in what is considered a blow to the partisans of .

Although he has been a member of the pragmatic-conservative , he has a close bond to the reformist party. He has been seen as flip-flopping between conservative and reformist camps since the election of , supporting reformers in that election, but going back to the conservative camp in the 2000 parliamentary elections as a result of the reformist party severely criticizing and refusing to accept him as their candidate. Reformists including accused him of involvement in murdering dissidents and writers during his presidency. In the end the major differences between the and the reformists party weakened both and eventually resulted in their loss at the presidential elections in 2005. However Rafsanjani has regained close ties with the reformers since he lost the 2005 presidential elections to .

Accusations of involvement in assassinations and bombings

In 1997, a German court convicted two men of murder in the 1992 of Sadiq Sharafkindi, an Iranian-ish leader, as well as three of his associates, and convicted two others of being accessories to the crimes. Presiding Judge said the men had no personal motive but were following orders. Without naming names, Kubsch said the gangland-style murders had been ordered by Iran's , to which Iran's President and spiritual leader belonged. Prosecutors had contended that Iran's powerful spiritual leader, , and Iranian President Hashemi Rafsanjani had personally ordered the killings. [ [http://www.cnn.com/WORLD/9704/10/germany.iran/ CNN - German court implicates Iran leaders in '92 killings - Apr. 10, 1997 ] ]

He was born in the village of near the city of in to a poor family of pistachio farmers. He has eight other siblings.

From a marriage to Effat Mar'ashi in 1958, Rafsanjani has three sons: Mohsen, Mehdi, and Yasser, as well as two daughters, Fatemeh and Faezeh. Only Faezeh Hashemi chose a political life, which led to her becoming a Majlis representative and then the publisher of the newspaper "Zan".

Many believe the Rafsanjani family to be the richest man in Iran due to his deep involvement in various Iranian industries, including the oil industry, as well as his ownership of many properties throughout the country. There have also been allegations that some of his wealth has also come from arms deals made after the Revolution.

Rafsanjani has authored a few books, one of the most important being a book on titled "Amir Kabir; the Hero of Fighting against Imperialism". He is also gradually publishing his multi-volume memoir titled "Towards Destiny". The seventh volume of his memoirs, in which he writes that had approved the proposal to omit the rallying cry "Death to America," was banned and collected from bookstores a few days after its publication [ [http://www.roozonline.com/english/archives/2007/09/post_10.html Ministry of Culture Bans Rafsanjani’s Memoir? (ROOZ :: English) ] ] .

The bribery which has recently come to public attention, has been denied by , and he has threatened the newspapers that he will legally prosecute those which publish this incident. The CEO of Total, , is currently under investigation in with regards to this incident but is living in Iran due his father's power in this country. [ [http://www.rajanews.com/News/?7618 تكذيب هرگونه ارتباط با توتال :: RajaNews.Com :: ] ]

magazine at one time listed Rafsanjani in their list of richest people in the world and has written that as the real power behind the , he "has more or less run the Islamic Republic for the past 24 years." [ [http://www.forbes.com/free_forbes/2003/0721/056.html "Millionaire Mullahs"] from ] His wealth has earned him the infamous nickname of "Akbar Shah" in Iran. [ [http://www.spiegel.de/international/spiegel/0,1518,360535-2,00.html Future of the Middle East: The Last Chance for Reformers in Iran - 2 - International - SPIEGEL ONLINE - News ] ]

Although Ayatollahs are not permitted to shave their beards, Rafsanjani's condition of has not permitted Rafsanjani to grow much facial hair. This has become the butt of many jokes, satire and comedy around Iran along with his background of pistachio farming. Although Khamenei issued a decree banning jokes around this and his background, he still continues to be joked about throughout Iran.

*"If one day, the is also equipped with weapons like those that possesses now, then the imperialists' strategy will reach a standstill because the use of even one inside Israel will destroy everything. However, it will only harm the Islamic world. It is not irrational to contemplate such an eventuality." (December 2001) [ [http://www.globalsecurity.org/wmd/library/news/iran/2001/011214-text.html "Rafsanjani's Qods Day speech (Jerusalem Day)"] , "Voice of the Islamic Republic of Iran", Tehran, in Persian, translated by "BBC Worldwide Monitoring", original broadcast December 14, 2001] ]
*"If the Americans attack Iran, the world will change. …They will not dare to make such a mistake" (2004) [ [http://www.washingtonpost.com/wp-dyn/articles/A9630-2004Oct5.html Iran's Missiles Can Now Hit Europe, Ex-Official Says] ]
*"We are not bothering anyone, but we have acquired nuclear expertise and we want to benefit from it to improve our life."
*"You need diplomacy and not slogans. This is the place for wisdom, the place for seeking windows that will take you to the objective." (2005) [ [http://www.washingtonpost.com/wp-dyn/content/article/2005/10/07/AR2005100701865.html Iran Moves to Curb Hard-Liners: Power Given to Relatively Moderate Body Led by Rafsanjani] ]
*"We want all the Palestinians back in their homeland, and then there can be a fair referendum for people to choose the form of state they want. Whoever gets the majority can rule." (2005) [ [http://www.washingtonpost.com/wp-dyn/content/article/2005/10/28/AR2005102801959.html Iran's Leader Joins Large Anti-Israel March] ]
*"There is no doubt that America is a superpower of the world and we cannot ignore them. I think that Americans should gradually begin to adopt positive behavior rather than doing evil. They should not expect an immediate reaction in return for their positive measures. It will take time." [ [http://regimechangeiran.blogspot.com/2005/05/rafsanjani-urges-us-to-begin-thaw-in.html New York Times] ]
*"I believe the main solution [referring to the nuclear issue] is to gain the trust of Europe and America and to remove their concerns over the peaceful nature of our nuclear industry and to assure them that there will never be a diversion to military use." [ [http://www.chinadaily.com.cn/english/doc/2005-05/19/content_444110.htm Rafsanjani urges U.S. to begin thaw in ties] ]
*"Europe resolved a great problem – the problem of the Zionist danger. The Zionists, who constituted a strong political party in Europe, caused much disorder there. Since they had a lot of property and controlled an empire of propaganda, they made the European governments helpless. What Hitler and the German Nazis did to the Jews of Europe at that time was partly due to these circumstances with the Jews. They wanted to expel the Zionists from Europe because they always were a pain in the neck for the governments there. This is how this calamity fell upon the Muslims, especially the Palestinians, and you all know this history, more or less. [...] The first goal was to save Europe from the evil of Zionism, and in this, they have been relatively successful. [ [http://www.memritv.org/clip_transcript/en/1575.htm Clip Transcript ] ]