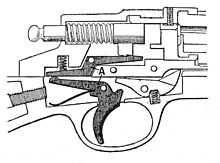 A trigger is a mechanism that actuates the firing sequence of a firearm. Triggers almost universally consist of levers or buttons actuated by the index finger. Rare variations use the thumb or weak fingers to actuate the trigger. Examples are the M2 Browning machine gun and the Springfield Armory M6 Scout.

Firearms use triggers to initiate the firing of a cartridge in the firing chamber of the weapon. This is accomplished by actuating a striking device through a combination of spring and kinetic energy operating through a firing pin to strike and ignite the primer. There are two primary types of striking mechanisms, hammers and strikers. Hammers are spring-tensioned masses of metal that pivot on a pin when released and strike a firing pin to discharge a cartridge. Strikers are, essentially, spring-loaded firing pins that travel on an axis in-line with the cartridge eliminating the need for a separate hammer. The connection between the trigger and the hammer is generally referred to as the sear surface. Variable mechanisms will have this surface directly on the trigger and hammer or have separate sears or other connecting parts.

There are numerous types of action, which is the logic of how the mechanism is built and how it is used (where the mechanism is the trigger, hammer, and safeties considered as a unit of interconnected parts). They are categorized according to which functions the trigger is to perform. In addition to releasing the hammer or the striker, a trigger may cock the hammer or striker, rotate a revolver's cylinder, deactivate passive safeties, select between semi-automatic and full-automatic fire such as the Steyr AUG (see Progressive trigger), or pre-set a 'set trigger'. Most modern firearms use the trigger to deactivate passive safeties but this does not change how they are identified.

A single-action (SA) trigger performs the single action of releasing the hammer or striker to discharge the firearm each time the trigger is pulled.[1] Almost all rifles and shotguns use this type of trigger.[1] Single-action semi-automatic pistols require that the hammer be cocked before the first round can be fired, although most designs cock the hammer as part of the loading process (e.g., the act of inserting the magazine and operating the slide mechanism to chamber the first round also cocks the hammer or striker into the ready-to-fire position).[2] Once the first round is fired, the automatic movement (recoil) of the slide cocks the hammer for each subsequent shot. The pistol, once cocked, can be fired by pulling the trigger once for each shot until the magazine is empty. The M1911 and Browning Hi-Power are single-action pistols that function in this manner.[2] Single-action revolvers require the hammer to be cocked by hand every time the weapon is fired.

A double-action, also known as double action only (DAO) to prevent confusion with DA/SA designs, is similar to a DA revolver trigger mechanism; however, there is no single action function. A good example of this action is the Sig Sauer DAK trigger. For semi-automatic pistols with a traditional hammer (that employ only the double action function of the trigger), the hammer will return to its decocked position after each shot. Subsequent shots require the double action trigger firing sequence. For striker-fired pistols such as the Taurus 24/7, the striker will remain in the rest position through the entire reloading cycle. This term applies mostly to semi-automatic handguns; however, the term can also apply to some revolvers such as the Smith & Wesson Centennial, the Type 26 Revolver, and the Enfield No. 2 Mk I revolvers, in which there is no external hammer spur. Glock and Kahr semi-automatic pistols are not DA (or DAO) pistols because the striker is "cocked" to an intermediate position by the operation of the slide and they cannot be re-activated by pulling the trigger a second time.

A double-action/single-action (DA/SA) firearm combines the features of both mechanisms. Often called traditional double action, these terms apply almost exclusively to semi-automatic handguns. The function of this trigger mechanism is identical to a DA revolver. However, the firing mechanism automatically cocks the hammer or striker after the gun is fired. This mechanism will cock and release the hammer when the hammer is in the down position, but, on each subsequent shot, the trigger will function as a single action. The Mateba Autorevolver is a semi-automatic revolver that functions on a DA/SA system. The Beretta 92 is a good example of a DA/SA semi-automatic pistol. On many DA/SA pistols (including the Beretta), there is the option to cock the hammer before the first shot is fired. This removes the heavy pull of the double-action. Also, there is often a de-cocker to return the pistol to double-action.

A Double-crescent trigger, is a trigger which provides select fire capability without the need for a fire mode selector switch. Pressing the upper segment of the trigger produced semi-automatic fire, while holding the lower segment of the trigger produced fully automatic fire. Though considered innovative at the time, the feature was eliminated on most firearms due to its complexity. Examples are the MG 34, Kg m/40 light machine gun and the M1946 Sieg automatic rifle.

A release trigger releases the hammer or striker when the trigger is released by the shooter, rather than when it is pulled.[3] Release triggers are largely used on shotguns intended for trap shooting.[citation needed]

A set trigger allows a shooter to have a greatly reduced trigger pull (the resistance of the trigger) while maintaining a degree of safety in the field. There are two types: Single Set and Double Set.

A Single Set Trigger is usually one trigger that may be fired with a conventional amount of trigger pull weight or may be 'set' by usually pushing forward on the trigger. This takes up the creep in the trigger and allows the shooter to enjoy a much lighter trigger pull.

As above, a double set trigger accomplishes the same thing, but uses two triggers: one sets the trigger and the other fires the weapon. Set triggers are most likely to be seen on customized weapons and competition rifles where a light trigger pull is beneficial to accuracy.

Pre-set strikers and hammers apply only to semi-automatic handguns. Upon firing a cartridge or loading the chamber, the hammer or striker will rest in a partially cocked position. The trigger serves the function of completing the cocking cycle and then releasing the striker or hammer. While technically two actions, it differs from a double-action trigger in that the trigger is not capable of fully cocking the striker or hammer. It differs from single action in that if the striker or hammer were to release, it would generally not be capable of igniting the primer.
Examples of pre-set strikers are the Glock, Smith and Wesson M&P, Kahr Arms, and Ruger SR series pistols.
Examples of pre-set hammers are the Kel-Tec P-32 and Ruger LCP pistols.

Pre-set hybrid triggers are similar to a DA/SA trigger in reverse. The first pull of the trigger is pre-set. If the striker or hammer fail to discharge the cartridge, the trigger may be pulled again and will operate as a Double Action Only (DAO) until a malfunction is cleared or the cartridge discharges. This allows the operator to attempt to fire a cartridge after a misfire malfunction. The Taurus PT 24/7 Pro pistol (not to be confused with the first-generation 24/7 which was a traditional pre-set) offers this feature as of 2006.

Each trigger mechanism has its own merits. Historically, the first type of trigger was the single action.[2] This is the simplest mechanism and generally the shortest, lightest, and smoothest pull available.[2] The pull is also consistent from shot to shot so no adjustments in technique are needed for proper accuracy. On a single-action revolver, for which the hammer must be manually cocked prior to firing, an added level of safety is present. On a semi-automatic, the hammer will be cocked and made ready to fire by the process of chambering a round, and as a result an external safety is sometimes employed.

Double action triggers provide the ability to fire the gun no matter whether the hammer is cocked or uncocked. This feature is desirable for military, police, or self-defense pistols. The primary disadvantage of any double-action trigger is the extra length the trigger must be pulled and the extra weight required to overcome the spring tension of the hammer or striker.

DA/SA pistols are versatile mechanisms. These complex firearms generally have a manual safety that additionally may or may not serve to decock the hammer. Some have a decocking lever and a manual safety as well. As a disadvantage, these levers are often intermingled with other levers such as slide releases and take-down levers with variables that become confusing. Training will largely overcome this weakness. One other disadvantage is the difference between the first double-action pull and subsequent single-action pulls (if the hammer is not set before the first shot by the user).

DAO firearms attempt to solve the problems with DA/SA mechanisms by making every shot a double-action shot. Because there is no difference in pull weights, training and practice are simplified. Additionally, negligent discharges are reduced because of the heavier trigger pulls. This is a particular advantage for a police pistol. These weapons also generally lack any type of external safety. DAO is common among police agencies and for small, personal protection firearms. The primary deficiency is that accurate fire is difficult due to the additional trigger weight and travel required for each shot.

Pre-set triggers, only recently coming into vogue, offer what some would consider an optimum balance of pull weight, trigger travel, safety, and consistency. Glock popularized this trigger (Gaston Glock evolving the mechanism from the Roth-Steyr M1907), and many other manufacturers have released preset striker products of their own. The primary disadvantage of the pre-set trigger is that pulling the trigger a second time after a failure to fire will not re-strike the primer. In normal handling of the firearm, this is not an issue; loading the gun requires that the slide be retracted, pre-setting the striker. Clearing a malfunction also usually involves retracting the slide following the "Tap rack bang" procedure, although proponents of second-strike functionality argue that the majority of rounds will fire with a second strike. Pre-set hybrid strikers are advocated as the answer to this by some manufacturers, while others insist systems like the SIG Sauer Double Action Kellerman (see SIG Sauer P226 DAK version) and Heckler & Koch Law Enforcement Modification (see Heckler & Koch USP LEM trigger under 'Variants') best blend the functionality of hammer based mechanisms with a trigger pull more akin to a striker system.