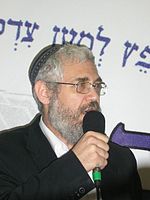 Rabbi Mordechai Elon (born December 9, 1959, Jerusalem, Israel) is a Zionist Israeli rabbi. He has headed several Jewish, religious and social organizations and institutions, as well as having hosted television and radio shows.[1] He was the subject of an investigation of alleged sexual misconduct.[2]

Elon was born in Jerusalem and received his high-school education at "Yishivat Yerushalayim Latzeirim". After graduating from "Yishivat Yerushalayim Latzeirim" he went on to learn further religious studies at the Hesder Yeshiva Yeshivat Or Etzion and at the Hesder Yeshiva of Kiryat Shmona. In his twenties he began teaching religious studies at the Horev Yeshiva High-School in Jerusalem and later became the Rosh Yeshiva in June 1987. He left Horev Yeshiva High-School in 2002 to become the Rosh Yeshiva of Yeshivat HaKotel in the Old City, Jerusalem.[4] Elon left Yeshivat HaKotel in 2006.[5]

He had a regular weekly lecture on the Torah portion at the Yeshurun synagogue in Jerusalem. Hundreds of people came to hear him and the lectures were aired on a public Israeli radio station. Elon hosted a weekly television show on which he would speak about the Torah portion.[6]
Elon established and until recently headed a Jewish, social and religious organization called Mibereshit. The organization works with the Israeli education ministry and Israeli schools in order to bring Jewish children and teens to feel closer to their Jewish roots and to the land of Israel.[7]

Elon also headed a bible group held at the residence of the President of Israel.[8]

In February 2010 Takana, a rabbinical forum that works to prevent sexual abuse in the national religious community, issued a statement regarding Elon and alleged sexual misconduct. In the statement, Takana claimed that following its founding in 2003, one of the first complaints it received was against Elon. The compliant said that Elon had committed “sexual exploitation by a religious authority". Takana then began to conduct an investigation which included meeting Elon and asking him about the allegations. Takana's conclusion to the investigation was to order Elon to leave his post at Yeshivat Hakotel and to retire from public life. Takana claims that at the time, Elon agreed to their demands. Following their demands Elon did leave his position at Yeshivat Hakotel and moved to Migdal in northern Israel. Takana claims that they released the statement because Elon had not fully honored his agreement.[9] Takana also claimed that they had informed the Attorney General of Israel Menachem Mazuz about the agreement with Elon.[10]

In a subsequent clarification, the forum alleged that Elon had maintained ongoing sexual relationships with a number of his male students, and that Elon had confessed to at least some of the allegations to the Takana investigatory panel. Takana claimed that the publicity was meant to make progress, end the affair, and ensure the personal security of vulnerable students.
Elon denied the allegations and defended himself saying that the truth would soon come. Aharon Lichtenstein who was on the Takana panel, in a speech at his yeshiva, expanded on the affair and the panel's considerations, and said he had received threats of legal action after the story broke.[11]

After the release of the statement and clarifications Attorney General Yehuda Weinstein, who replaced Mazuz, instructed the police to conduct a preliminary investigation into the affair. In August 2010, Weinstein, instructed the police follow up the preliminary investigation with a criminal investigation of alleged sexual offenses committed against two minors.[12] The police found sufficient evidence to submit the case to the Jerusalem District Prosecutor's office.[13] In January 2011, the Jerusalem District Prosecution recommended to Weinstein that Elon be indicted and in February 2011, it summoned Elon to a pre-indictment hearing.[14] In November 2011 he was indicted.[15]