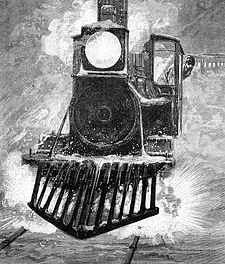 This illustration from an 1882 Leslie's Monthly portrays an engineer (fireman) finding a torpedo on the track.

A railway detonator (called a torpedo in North America) is a device used to make a loud sound as a warning signal to train drivers. The detonator is the size of a large coin with two lead straps, one on each side. The detonator is placed on the top of the rail and the straps are used to secure it. When the wheel of the train passes over, it explodes emitting a loud bang. It was invented in 1841 by English inventor Edward Alfred Cowper.[1]

A torpedo on a rail 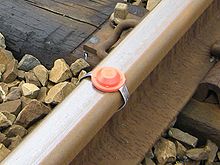 A detonator on a railway line in Belgium

Typical uses of detonators include

On a high-speed line, detonators may need to be placed on both rails.

As with all explosives, detonators can become unstable after a period of time and, therefore, must be replaced regularly.

Contrary to popular belief, they are triggered by pressure, rather than impact. This makes them safe during transport, as they cannot detonate in a bag or storage container. Attempting to detonate them by striking with a hammer will not work.[dubious – discuss]

Upon hearing the noise of a torpedo exploding, the engineer would reduce speed to 20 mph or less; the train could not resume its original speed until it had travelled at least two miles beyond where it encountered the device. Traditionally, used in pairs to ensure that the sound registered with train crews. Torpedoes are essentially obsolete in the U.S. today, as soundproof construction of modern locomotive cabs renders the devices useless.

Quoting from the terminology book of the Brotherhood of Railroad Signalmen:

A torpedo is a device which is strapped to the top of a rail. When a train drives over the torpedo, it emits a very loud "bang" which can be heard over the noise of the engine, and signals the engineer to stop immediately. Torpedoes are generally placed by the flagman when protecting a train ahead. Torpedoes are about 2" x 2", red in color, about 3/4" high, and have two lead straps attached, which hold it to a rail. The torpedo has discs inside and are filled with detonating powder. The torpedo was invented about 1874.

Defined by the Rule Book, when protecting a line — for whatever reason (failed train, obstruction fouling the running lines) — three detonators must be placed 20 yards apart. This signals an emergency stop to the driver. Detonators are also used to protect engineering works, where the line remains open. The controller of the possession will communicate with the operative with the detonators as to when to place them on the track, or lift them to allow an engineering, freight, or passenger train through.

Detonators were used where hazards had to be secured and there was no time for other signaling or if there was a danger that another signal is not recognizable in time, for example due to fog or snow. To give the emergency signal, three detonators were placed in short succession. Even the explosion of a single detonator was seen as stop signal. Since 1986 detonators are no longer used on German railways. Only the ICE 3 trains that travel to France still have detonators on board because of French regulations.

The use of detonator signals have been superseded by radio communications since the early 1950s. In November 2010, the Taiwan Railway Administration deployed 800 of these obsolete signals for destruction on maintenance tracks. It received media attention, emitting sounds similar to the culturally significant firecrackers.

Many mechanical signal boxes in the UK were fitted with detonator placers, which automatically placed a number of detonators on a running line when a lever was operated in the signal box. The levers were painted a striking white and black chevron pattern – pointing upwards for the "Up" line or pointing downwards for the "Down" line. In some cases, the placers were fed from a cartridge holding a number of detonators. According to Military and Civilian Pyrotechnics by Ellern on pg 368 the formula for Railroad torpedoes are by mass: KClO3-40% S-16% Sand(-60 mesh)-37% Binder-5% Neutralizer-2%

Because of the length of Garratt locomotives, which made the sound of a detonator hard to hear, the New South Wales 60 class locomotive were fitted with "sound pipe" to bring the noise of the explosion closer to the crew.