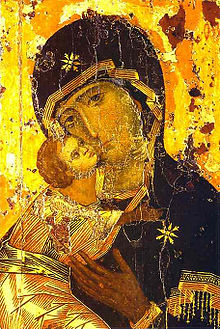 The veneration of the Theotokos as a holy protectress of Vladimir was introduced by Prince Andrew, who dedicated to her many churches and installed in his palace a revered image, known as Theotokos of Vladimir.

The Vladimir-Suzdal Principality (1168–1389 AD) (Russian: Владимиро-Су́здальское кня́жество, Vladimiro-Suzdal'skoye knyazhestvo) or Vladimir-Suzdal Rus’ (Russian: Владимирско-Су́здальская Русь, Vladimirsko-Suzdal'skaya Rus’) was one of the major principalities which succeeded Kievan Rus' in the late 12th century and lasted until the late 14th century. For a long time the Principality was a vassal of the Mongolian Golden Horde. Traditionally, it is perceived as a cradle of the Great Russian language and nationality, Vladimir-Suzdal gradually evolved into the Grand Duchy of Moscow.

There is little or no evidence of that principality before 11th century. One of the first notable administrators presumably were sons of Vladimir the Great, Boris and Gleb, later Yaroslav the Wise. The principality occupied a vast territory in the North-East of Kievan Rus', approximately bounded by the Volga, Oka and Northern Dvina. Until the decline of the Kievan Rus in the 12th-13th centuries the territory was also commonly called as Zalesie, meaning beyond woodland. There is a scarce historical information for the area during that time. The foundation of the Rostov city has been lost in the span of time. According to the archeologist Andrei Leontiev, who is specialized in the history of the region, the Rostov land until the 10th century was already under control of Rostov city while Sarskoye Gorodishche was a tribal center of native Merya people.

In the 10th century an eparchy was established in Rostov. One of the first known princes was Yaroslav the Wise and later Boris Vladimirovich. At that time Rostov was the major center of the Eastern Orthodox Christianity in the region dominated mostly by shamanism. Until 11th century Rostov was often associated with the Great Novgorod. Evidently the spread of Eastern Orthodox Christianity to the lands of the Great Perm was successfully conducted from Rostov. The regional capital was Rostov the Great, including other important towns included Suzdal, Yaroslavl and Belozersk.

Vladimir Monomakh, being the son of the Grand Prince of Vsevolod I inherited the rights to the principality in 1093 AD. As the Grand Prince of Kiev he appointed his son George I the Long-Armed to rule the Northeastern lands who in 1125 moved its capital from Rostov to Suzdal after which the Principality was referred to as Rostov-Suzdal.[1] During the 11th and 12th centuries when southern parts of Rus' were systematically raided by Turkic nomads, their inhabitants began to migrate northward. In the formerly wooded areas, known as Zalesye, many new settlements were established. The foundations of Pereslavl, Kostroma, Dmitrov, Moscow, Yuriev-Polsky, Uglich, Tver, Dubna, and many others were assigned (either by chronicle or popular legend) to George I, whose sobriquet alludes to his dexterity in manipulating the politics of far-away Kiev. Sometime in 1108 Vladimir strengthened and rebuilt the town of Vladimir on the Klyazma River, 31 km south of Suzdal. During the rule of George I the Long-Armed the principality gained its military strength and in Suzdal-Ryazan war of 1146 conquered Ryazan Principality. Later in 1150s Yuri couple of times occupied Kiev as well. Since that time the lands of the Northeastern Rus played an important role in the politics of the Kievan Rus. 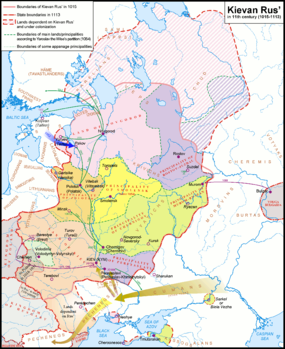 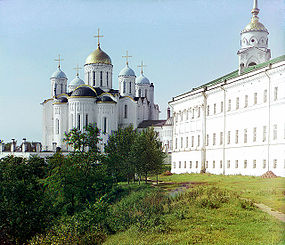 Assumption Cathedral in Vladimir was built in 1158–1160 and functioned as the mother church of Russia in the 13th century.

George's son Andrew the Pious significantly increased Vladimir's power at the expense of the nearby princely states. Andrew treated some other centres of power (such as Kiev) with contempt. After burning down Kiev (then the metropolitan seat of Rus) in 1169, he refused to accept the Kievan throne for himself, enthroning his younger brother there instead. His capital of Vladimir was for him a far greater concern, as he embellished it with white stone churches and monasteries. Andrew was murdered by boyars in his suburban residence at Bogolyubovo in 1174.

After a brief interregnum, Andrew's brother Vsevolod III secured the throne. He continued most of his brother's policies, and once again subjugated Kiev in 1203. Vsevolod's chief enemies, however, were the Southern Ryazan Principality, which appeared to stir discord in the princely family, and the mighty Turkic state of Volga Bulgaria, which bordered Vladimir-Suzdal to the east. After several military campaigns, Ryazan was burnt to the ground, and the Bulgars were forced to pay tribute.

Vsevolod's death in 1212 precipitated a serious dynastic conflict. His eldest son Konstantin, gaining the support of powerful Rostovan boyars and Mstislav the Bold of Kiev, expelled the rightful heir, his brother George, from Vladimir to Rostov. Only six years later, upon Konstantin's death, did George manage to return to the capital. George proved to be a shrewd ruler who decisively defeated Volga Bulgaria and installed his brother Yaroslav in Novgorod. His reign, however, ended in catastrophe, when the Mongol hordes under Batu Khan took and burnt Vladimir in 1238. Thereupon they proceeded to devastate other major cities of Vladimir-Suzdal during the Mongol invasion of Russia.

Neither Vladimir, nor any other of the older cities of the principality, managed to regain the power of the Great Rus after the Mongol invasion. The principality became a vassal of the Mongol Empire (later succeeded by the Golden Horde), the Grand Prince being appointed by the Great Khan. Even the popular Alexander Nevsky of Pereslavl had to go to the Khan's capital in Karakorum in order to be installed as the Grand Prince in Vladimir. As many factions strove for power, the principality rapidly disintegrated into eleven tiny states: Moscow, Tver, Pereslavl, Rostov, Yaroslavl, Uglich, Belozersk, Kostroma, Nizhny Novgorod, Starodub-upon-Klyazma, and Yuriev-Polsky. All of them nominally acknowledged the suzerainty of the Grand Prince of Vladimir, but his effective authority became progressively weaker.

By the end of the century, only three cities — Moscow, Tver, and Nizhny Novgorod — still contended for the grand princely title. Their rulers, once installed as grand princes of Vladimir, typically chose to remain in their own cities rather than moving to Vladimir. The Grand Duchy of Moscow gradually came to eclipse its rivals. When the metropolitan of all Rus moved his chair from Vladimir to Moscow in 1325, it became clear that Moscow had effectively succeeded Vladimir as the chief centre of power in the north-east and the rest of the Rus.