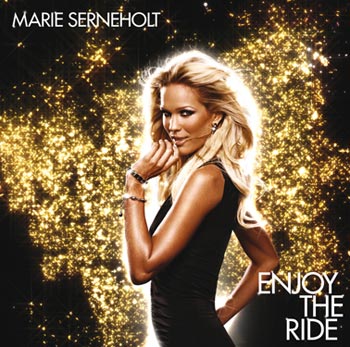 "Enjoy The Ride" is the debut studio from Swedish , led by the first single and #2 hit "That's The Way My Heart Goes" the album was released on , , debuting at #9 in Sweden, but falling quickly on the charts.

Serneholt is said to preparing for the international release of the album starting in , and other an countries.

The album was also released in as a Limited Edition.

Serneholt knew that she wanted to embark on a solo career after ' parted ways, but wanted to absorb all the impressions of the past years first. She needed the right people to work with as well as the right material. [Official Website, February 2006 [http://www.marieserneholt.com/?sid=article&pid=read&id=4194 Biography] ]

Serneholt first contacted several years ago. At that point, however, Elofsson’s schedule was full, and Marie wasn’t yet sure in what direction to take her career. And in 2005 she felt she had a vision and called him again. This time, all the pieces fell into place. Elofsson had just started collaborating with two relatively young and unknown producers, Richard Brandén and Pär Westerlund.

Serneholt decided she wanted to make a Pop album, Elofsson was relieved, There are so many artists that suddenly want to start working with R&B with cool beats or riff-based rock.

Elofsson is listed as co-writer of every track on the album. Besides writing with his co-producers, he has also co-written with the legendary and Swedish colleague among others.

Elofsson started his own record company Planet Six, a part of with this Serneholt and Elofsson could work undisturbed and at their own pace, with no involvement of any record companies, media or outside opinions. Elofsson had saved choice tidbits, songs that would have been guaranteed hits with established artists.