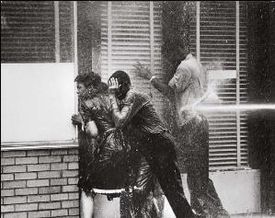 One of Moore's May 3, 1963 photographs of the Children's Crusade in Birmingham, Alabama

Charles Lee Moore (March 9, 1931 – March 11, 2010) was an American photographer most famous for his photographs documenting the American civil rights era.

In 1958, while working in Montgomery, Alabama for the Montgomery Advertiser, he photographed an argument between Martin Luther King, Jr. and two policemen.[1] His photographs were distributed nationally by the Associated Press, and published in Life.

From this start, Moore traveled throughout the South documenting the Civil Rights Movement. His most famous[citation needed] photograph, Birmingham, depicts demonstrators being attacked by firemen wielding high-pressure hoses. U.S. Senator Jacob Javits, said that Moore's pictures "helped to spur passage of the Civil Rights Act of 1964."[1]

In 1962, Moore left the newspapers to start a freelance career. He worked for the Black Star picture agency, which sold much of his work to Life.

Moore went on to cover the Vietnam War and many other trouble spots. He then moved on to nature, fashion and travel photography, in addition to corporate work.

He also photographed conflicts in the Dominican Republic, Venezuela and Haiti.

In 1989, Charles Moore became the first recipient of the Eastman Kodak Crystal Eagle Award for Impact in Photojournalism which is awarded for a "body of photographic work which has influenced public perceptions on important issues of our time" in the NPPA–University of Missouri Pictures of the Year Competition.[2]

In 2008, Moore's last photography observed the removal of a tree at Barton Hall (Alabama), a historic 1840's plantation home.