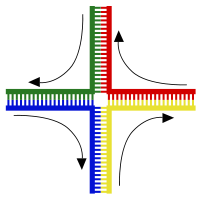 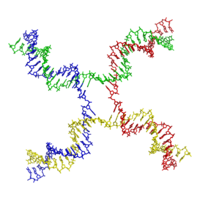 Molecular structure of a Holliday junction. From PDB 3CRX.

A Holliday junction is a mobile junction between four strands of DNA. The structure is named after Robin Holliday, who proposed it in 1964[1][2][3] to account for a particular type of exchange of genetic information he observed in yeast known as homologous recombination. Holliday junctions are highly conserved structures, from prokaryotes to mammals.[4]

Because these junctions are between homologous sequences, they can slide up and down the DNA. In bacteria, this sliding (or branch migration) is facilitated by the RuvABC complex or RecG protein, molecular motors that use the energy of ATP hydrolysis to push the junction around. The junction must then be resolved, split up, to restore 2 linear duplexes. This can be done to either restore the parental configuration or to establish a crossed over configuration. Resolution can occur in either a horizontal or vertical fashion during homologous recombination, giving patch products (if in same orientation during double strand break repair) or splice products (if in different orientations during double strand break repair).

Holliday junctions are an intermediate in genetic recombination which are also of importance in maintaining genomic integrity.[1][5]

In prophase of meiosis I, duplicated homologous chromosomes pair and align end-to-end. Crossover can occur between aligned chromatids, leading to exchange of homologous segments by homologous recombination.

Chromosome segregation through meiotic divisions leads to novel genotypes, first in gametes, then in offspring.

In the original Holliday model for homologous recombination, single-strand breaks occur at the same point on one strand of each parental DNA. Free ends of each broken strand then migrate across to the other DNA helix, where the invading strands are joined to the free ends they encounter. The resulting crossover junction is called a Holliday junction.

As each crossover strand reanneals to its original partner strand it displaces the original complementary strand ahead of it, causing the Holliday junction to migrate. This creates heteroduplex DNA segments.

Cleavage and rejoining to re-establish two separate DNAs occurs in two ways. This is most easily visualized by first rearranging the Holliday structure. DNA molecules with this apparent structure have been observed.

This structure can be resolved by cleavage in the horizontal plane, leading to two molecules that do not show crossover of markers in genes A and B.

If, instead, the same structure is cleaved in the vertical plane, both of the resulting recombinant molecules show crossover of markers in genes A and B. All products, regardless of cleavage plane, are heteroduplexes in the region of Holliday junction migration.