He has written lyrics for over 30 years, most notably in partnership with Glenn Tilbrook. The two were primary members in Squeeze and Difford & Tilbrook. On their first appearance on Top of The Pops, Difford wore a T-shirt proclaiming 'Today Deptford, Tomorrow The World!' Some of their best-known songs are "Tempted", "Pulling Mussels (From the Shell)", "Black Coffee in Bed", "Cool for Cats", "Up the Junction" and "Annie Get Your Gun". 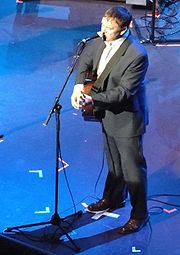 Difford has also written lyrics for music by Jools Holland, Elton John, Wet Wet Wet, Marti Pellow and others. In 2004, Lisa Stansfield released the Trevor Horn produced single, "If I Hadn't Got You", co-written by Difford with Chris Braide, which became a hit in Europe.

In addition to his work with Squeeze, he has released four solo albums:

In 2008 he also wrote the lyrics to 'Let's Not Fight this Christmas', a song performed by Difford and The One Show team, in a bid to get a Christmas Number 1.

In January 2010 Difford announced from the stage of the Half Moon, Putney, that he would be renting a villa in Italy that coming summer with Glenn Tilbrook – to write songs together for the first time in over ten years.

In March 2010, Difford curated 'Songs In The Key Of London', a evening of music dedicated to the capital at the Barbican Centre. The event featured Difford, Glenn Tilbrook, Jools Holland, Suggs and Chas Smash from Madness, Chaz Jankel and Derek Hussey from The Blockheads, Kathryn Williams, Robyn Hitchcock, Scritti Politti's Green Gartside, as well as younger acts such as Peggy Sue[disambiguation needed

], Tunng, Natty and Mystery Jets' Blaine Harrison. The evening was compered by actor Phil Daniels and included surprise guest Elvis Costello. The finale was the entire ensemble performing a rousing version of The Kinks' "Waterloo Sunset".