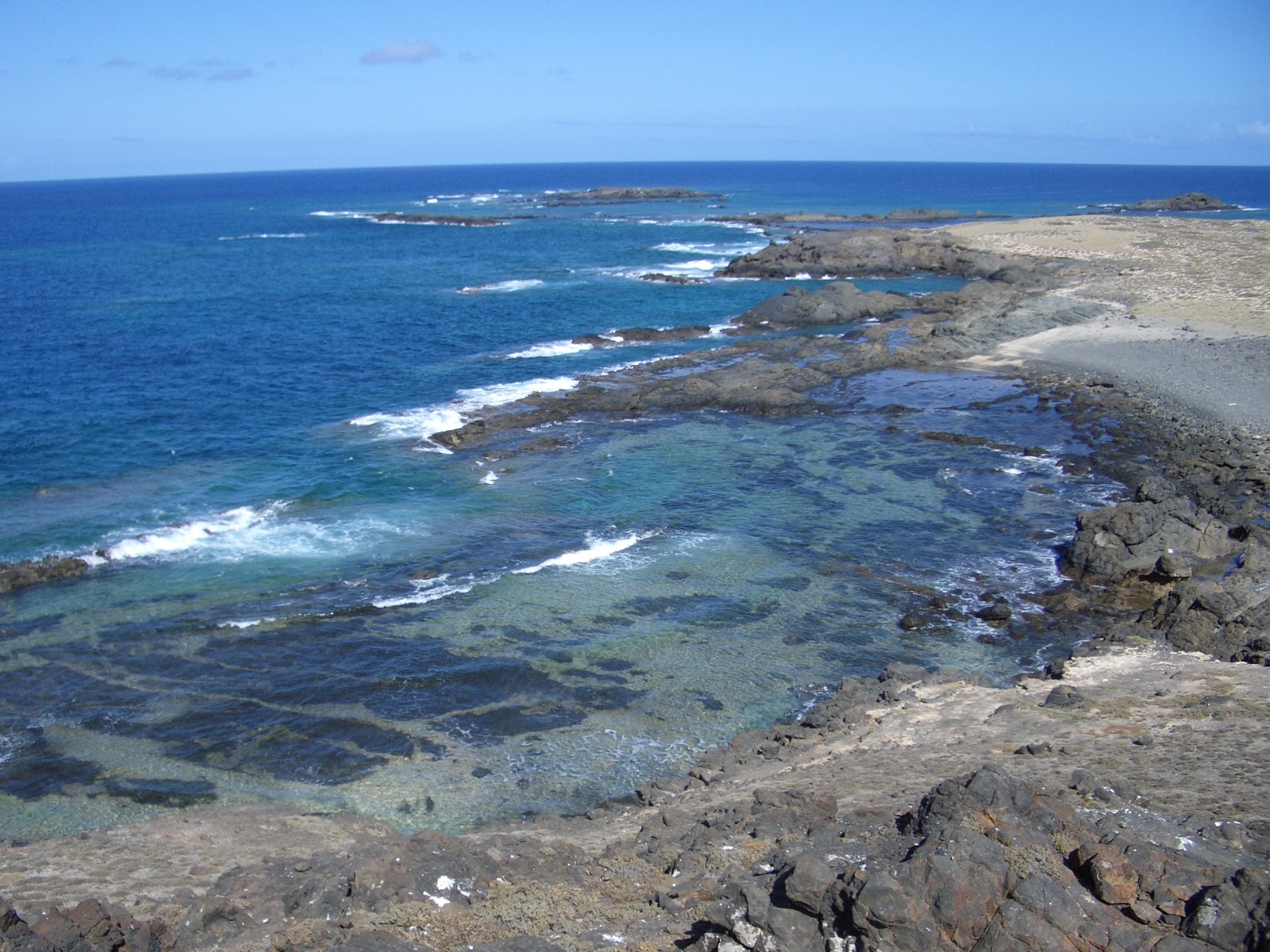 The Savage Islands are administered by the Portuguese municipality of and are part of the of Sé of Funchal. They are set aside as a nature reserve. There are two reserve zones, one on and another one on .

The Savage Islands are part of the n island groups of the , near and off , . The archipelago lies about convert|230|km|mi|0|abbr=on from , and convert|165|km|mi|0|abbr=on from the . The total land area of the Savage Islands is convert|2.73|km2|sqmi|2|abbr=on. The islands are surrounded by dangerous reefs, rendering access difficult and limited to few places; there are no fresh water sources.

The archipelago consists of two islands and several islets, in two groups about convert|15|km|mi|0|abbr=on apart:

As with all n islands, the Savage Islands are of volcanic origin. On the larger islands, cones of extinct es are found, such as the Atalaia Summit on Selvagem Grande. Other summits include Tornozelos and Veado. Headlands include Atalaia and Leste on Selvagem Grande, and Norte, Oeste, Leste and Garajaus on Selvagem Pequena.

There is evidence suggesting that the existence of these islands was known from early times. They were first indicated on a Venetian chart attributed to the Pizzigani brothers dated from 1367 [ [http://www.ceha-madeira.net/livros/madeira1.htm/ Albuquerque, Luis and Vieira, Alberto] , "The Archipelago of Madeira in the 15th Century", Funchal, Centro Estudos História Atlântico, 1988] . The islands are considered to be a "column branch" that extends from at a convert|3000|m|ft|0|abbr=on depth.

The were visited by European explorers, including natives of , since the 14th century.Fact|date=April 2007 In 1402, Castile began the conquest of the to join them to the Castilian realm. During those years of fighting, Castilian ships did not visit the Savage Islands, thus they did not populate the islands, which were considered uninhabitable.Fact|date=April 2007 Although the had been inhabited by a primitive population - the - human beings never set foot in the archipelago before the Portuguese discoveries and expansion. Thus, this island group presented itself to Portuguese navigators authentically uninhabited.

In 1438, the Portuguese mariner Diogo Gomes de Sintra declared that he had discovered the Savage Islands by chance, while returning to Portugal from the coast of Africa. He left the first written notice about the geography of ,

What is certain is that during the 16th century the Savage Islands belonged to a family from known as "Teixeiras Caiados".

In 1904 the islands were sold to Luís Rocha Machado.

The Permanent Commission of International Maritime Law gave sovereignty of the Savage Islands to Portugal on February 15, 1938.In 1959, the (WWF) became interested in the islands and signed a contract-promise with the owner, Luis Rocha Machado. In 1971 the Portuguese government intervened and acquired the islands, converting them into a nature reserve. The Savage Islands Reserve was created as part of the Madeira Natural Park; it is one of the oldest nature reserves of Portugal and it also includes the surrounding shelf to a depth of 200 m. In 1976, permanent surveillance began, and in 1978 the reserve was elevated to the status of Nature Reserve.

In 2002, part of the nature reserve was nominated to 's . They are currently included in the tentative World Heritage Site list.

Today the Savage Islands have a permanent team of wardens from Madeira Natural Park (On there is a permanent research station with two wardens year around while is manned usually by two wardens between May and October). These are the only human inhabitants on the islands.

The incidents of the dispute

*1881 - During a meeting of the Maritime Sinalization Commission the Spanish government requested that Portugal cooperate with the installation of a lighthouse in the islands. The Portuguese commission recognized the importance of the lighthouse to the sea route to the , but could not contribute to the project at that particular moment due to the involvement in the Portuguese coast signalization, which was absorbing all available funds. The Spanish Foreign Affairs Ministry stated during the meeting that "...it is not clear if the sovereignty of the island belongs to Spain or Portugal".
*1911 - In September the Portuguese government received an official communication from the Spanish government in which it was stated that Spain would build a lighthouse in the islands and had decided to include them in the Canary archipelago. Portuguese administration protested and it was agreed not to take any actions that might endanger a friendly solution to the dispute.
*1913 - Admiral Schultz Xavier conducted a survey of the and recommended "Pico da Atalaia" as the best location for the lighthouse.
*1929 - Rear Admiral clarifies, in a document, that the islands were always under administration, and therefore, were Portuguese.
*1932 - The Portuguese government legislated over the islands and declared them under a special regimen of hunt in favor of the owner.
*1938 - The Permanent Commission of International Maritime Law declares Portugal as the legitimate sovereign over the islands on February 15. A hydrographic survey mission proceeded to survey the islands and established several geodesic survey points.
*1972 - Two Spanish fishing boats, “"San Pedro de Abona"” and “"Áries"”, are arrested near the islands for illegal fishing.
*1975 - Canary Islands sailors disembark in the Savages and there they waved a Spanish flag, but the administration did not support them.
*1976 - Spanish fishing boat “"Ecce Homo Divino"” is arrested for illegal fishing.
*April 8, 1996 - Spanish F-18 fighters flew over the islands.
*August 2, 1996 - A helicopter Puma SA-330J from the simulated a landing on committing a double infraction: violation of the Portuguese air space and flying below 200m over the reserve.
*October 16, 1996 - Spanish F-18 fighters flew over the islands, but this time were filmed by the Portuguese RTP TV channel. Following these actions the Portuguese Foreign Affairs Ministry protested.
*May 1997 - The Portuguese Ministry of Defense signed an agreement with the Spanish government to restrain these actions.
*August 1, 1997 - The flyby actions happened again. The Portuguese Foreign Affairs Ministry reminded the agreement to the Spanish government.
*September 24, 1997 - Spanish fighters again flew over the islands at low altitude. Spanish ambassador to Portugal apologized for the actions. Portugal reinforced the islands with the Portuguese Navy.
*July 8, 2005 - One of the guards in and a biologist are threatened by a group of Spanish fisherman. A group of 10 marines was placed in the island during a month. ["Marinha reforça presença nas Selvagens após incidentes com pescadores", [http://www.publico.clix.pt/ Jornal O Público] , 2005, June 12]
*June 2007 - One Spanish fighter again flew over the islands at low altitude [ [http://www.correiomanha.pt/noticia.asp?id=246819&idselect=90&idCanal=90&p=200 Espanhóis violam espaço aéreo nas ilhas Selvagens] , , .] .

The temperatures in the Savage Islands exceed those in Madeira and the sea temperature remains comfortable all year round. There is almost no rainfall (desertic climate i.e. below 200 mm). once said he found the cleanest waters in the world there. Although there are commercial tours available, all visitors require special authorization from the Madeira Natural Park, the regional environmental authority.The scientific and natural interest of this tiny group of islands lies in its marine and unique flora as well as the sea birds that breed there. The , the , and the breed and nest on the islands and are the subject of annual scientific expeditions.

The Savage Islands host 150 species of plants, most of them creepers. The richest islands in flora are the Selvagem Pequena and Fora Islet as they have never suffered the introduction of non-indigenous animals or plants.These islands also have many endemic species of plants, some endemic snails and also a unique gecko ("Tarentola boettgeri bischoffi").