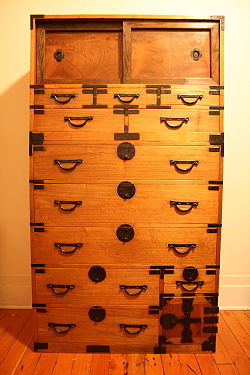 Tansu is the word for chest, chest of drawers or cupboard in Japanese. It is often used in the West to refer to traditional Japanese chests, handcrafted and made of fine woods, such as Hinoki (Japanese cypress), Keyaki (Japanese elm), Kuri (Japanese chestnut), Sugi (Japanese cedar) and Kiri (Paulownia).

Many collectors focus on finding antique Tansu. There are many workshops producing Tansu in imitation of the classic antiques. Some are made of excellent reclaimed wood, causing the new Tansu to retain a more aged look that some people seek.

Sendai-dansu for kimono, zelkova wood, note the elaborate ironwork, handles on side for transportation, and lockable compartment 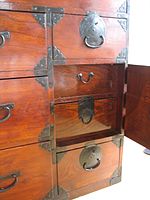 Detail of lockable compartment of a Sendai-dansu

Many regions of Japan made tansu. The castle towns on the post roads commonly became trade centers and developed distinctive styles. There are a few main characteristics to look for in determining the origin of a tansu. The ironwork: most towns used one or just a few styles of locks and hardware. Configuration: the majority of tansu from a region will display the same configuration of drawers and construction. clothing chests will look like other clothing chests and kitchen chest will look like other kitchen chests etc. Wood and Lacquer types are also clues to the origin of some pieces.

The elements of antique tansu hardware were created from forged iron, with on some occasions copper being used. The flat pieces were chiseled from forged iron plates and subsequent design elements engraved or inlaid. The black finish on the iron was created by applying rapeseed oil to the hot metal.[1]